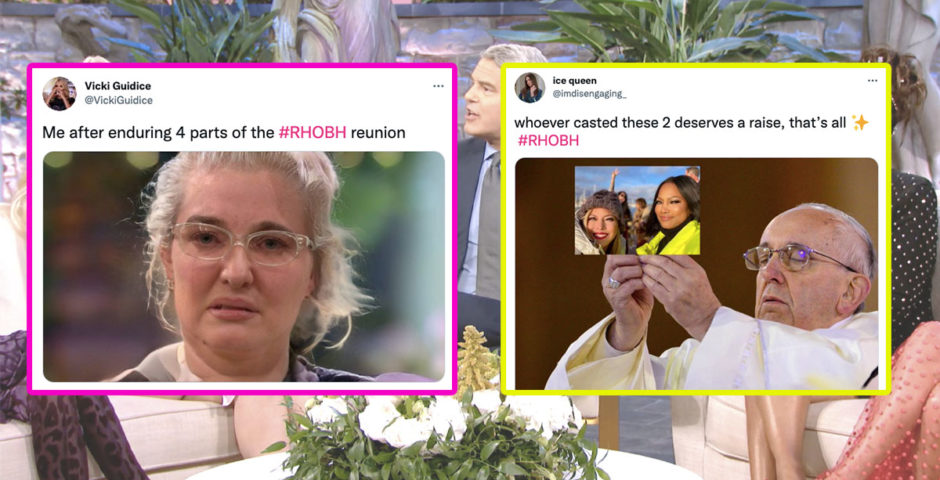 The RHOBH reunion is finally over, so here are 23 memes about the chaotic four episodes

Let’s be honest, nothing was resolved

The Real Housewives of Beverly Hills reunion has finally come to an end and after an incredibly chaotic season the four part reunion cleared up approximately five per cent of everyone’s questions.

The 11th season of the show focused on the breakdown of Erika Jayne’s marriage to Tom Girardi. There were lawsuits, alleged car accidents and alleged mistresses. In between the legal drama there were also fights between Garcelle and Dorit and Sutton and Crystal. And of course this season introduced us to the legend that is Kathy Hilton.

The majority of the other drama was cleared up pretty quickly during the reunion, which left us with three episodes full of time for Andy to grill Erika and to finally get answers to the many questions everyone had. Except that didn’t really happen. After watching all four episodes I feel more confused about what happened than I did before.

So in order to take some sense of joy from The Real Housewives of Beverly Hills reunion, here’s 23 memes about the chaotic episodes:

2. We really did not need four parts

This “explosive 4 part reunion” could’ve been an email #RHOBH pic.twitter.com/GG2j5QnL5o

3. Yeah I’m going to pass on asking a question

Erika: Ladies, come to me with your questions. I am the source. Just ask.

6. Real imagery of me right now

Me after enduring 4 parts of the #RHOBH reunion pic.twitter.com/kPPuuws6yG

Sorry Erika, that dinner was the best thing about the entire season. #RHOBHReunion #RHOBH pic.twitter.com/i820zAZg9I

9. Now that would be good TV

Erika really thinks she can last a season in RHOA or RHOP? #RHOBH pic.twitter.com/EO05ynw3wG

Wait so we’re really just not going to discuss the snow!? #RHOBH pic.twitter.com/bSD0qsP7El

Andy: “This was an explosive reunion!”

14. Too good for this world

whoever casted these 2 deserves a raise, that’s all ✨ #RHOBH pic.twitter.com/a57h5I50VK

15. Have I mentioned I love Kathy Hilton?

All of us when Andy finally called out Lisa Rinna for the years of being a pot stirrer and rumor spreader. #RHOBH #RHOBHReunion pic.twitter.com/j6iwB2af85

It’s interesting Erika only breaks down every time an important question is asked #RHOBH pic.twitter.com/5CJhU7aJyY

me ever since the season 7 reunion #RHOBH pic.twitter.com/Sy3gxMTnmK

When you start talking in the third person 🚩#RHOBH pic.twitter.com/Fvp4z7yr5K

21. Ok but what actually happened?

I’m still trying to figure out how many times the car or car(s) rolled over… 🤔 #RHOBH pic.twitter.com/MU0E6fo41q

22. This reunion cleared up nothing

I have more questions #RHOBH pic.twitter.com/1zpdBbfPIK

•Ranked: The mega salaries of all the Real Housewives of Beverly Hills

•Ranked: Who is the richest of all the Real Housewives of Beverly Hills?

•Quiz: Which iconic housewife are you from The Real Housewives of Beverly Hills?