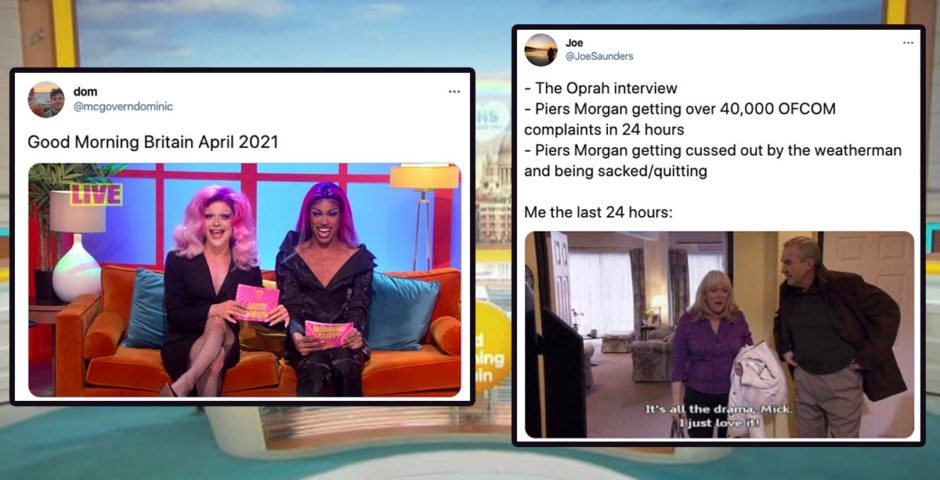 Turns out there is a god

After six years as one of the hosts of Good Morning Britain, Piers Morgan finally announced his resignation from the show yesterday and the internet collectively breathed a sigh of relief, and of course they celebrated by making memes.

Yesterday Piers announced he was leaving the ITV show after he was heavily criticised for his comments on Meghan Markle’s interview with Oprah. In the interview Meghan revealed she had at points felt suicidal and did not receive any help from the palace when she asked.

Piers said on Monday morning he did not believe Meghan and the moment has since sparked over 40,000 Ofcom complaints, one of the most complained about moments on TV ever.

Today Piers said he still stands by the comments he made, but the internet is more concerned with creating funny memes and reactions to Piers Morgan leaving Good Morning Britain. Many of them focus on who should replace Piers on the show and it’s clear it should be Bimini Bon Boulash and Tayce from Drag Race UK.

Me making my first ever Ofcom complaint pic.twitter.com/n1DjuAgx9y

"Piers Morgan has been fired"

4. Now this would be iconic casting

5. Sorry but do NOT compare Ginny to Piers

So in less than a fortnight Meghan’s forced the Daily Mail to do a front page apology, pay damages, exposed the Royal Family to a global stage and P45’d Piers Morgan. Rah. Say what you want about American work ethic.

8. This has easily been the most chaotic week of the year

No amount of Love Island will ever give me the madness from these past 48 hours of Megan and Harry exposing the Royal Family and the demise of Piers Morgan. Inject it into my veins.

9. Who is the snowflake now?

Piers Morgan: This snowflake generation gets offended at everything!

10. Nothing but respect for my king

Did Piers Morgan quit or was he firED? pic.twitter.com/vsJs0c5RPz

Not Pier’s getting fired on bin night? We really said Take the trash OUT !

We aren’t with you.We don’t stand with you. It’s a NO from us! Sorry you aren’t going to bootcamp! pic.twitter.com/EInTtYg8Ml

Me the last 24 hours: pic.twitter.com/V1YwYPjlSw

piers morgan and katie hopkins bumping into each other in the little tesco next to the job centre pic.twitter.com/fU6K8Nt3V2

17. Petition for Alison to host?

22. This is my expression for the foreseeable future

23. Why does this meme work for everything??

You won Meghan. Enjoy your freedom I hope it makes you happy. Dear lord what a sad little life Meghan. pic.twitter.com/W3MTud0B0M