They were working on the new series Grand Army

Writer Ming Peiffer has accused Netflix of “racist exploitation and abuse”, claiming it caused her and two other writers to quit working on the new series Grand Army.

Ming claimed the lead creator of the show went “full Karen” and called Netflix HR in after a Black writer got a hair cut. Ming also claimed Netflix tried to underpay the Latinx writer and after the Black writer attempted to change a storyline surrounding a Black character the three writers of colour were “psychologically abused”, which forced them to quit the show.

Me and the 3 writers of color who worked on the show quit due to racist exploitation and abuse. The show runner and creator went full Karen and called Netflix hr on the Black writer in the room for getting a haircut. Yes you read that correctly. Who wants to interview us? https://t.co/tBEbk8JRqm

The trailer for the new teen drama was shared on Twitter yesterday by Netflix and Ming retweeted it claiming she and three other writers quit due to “racist exploitation and abuse”.

She wrote: “Me and the 3 writers of colour who worked on the show quit due to racist exploitation and abuse. The show runner and creator went full Karen and called Netflix hr on the Black writer in the room for getting a haircut. Yes you read that correctly. Who wants to interview us?”

Ming followed up her original tweet correcting that it was herself and two other writers of colour when she meant the three writers. She also said she was “sickened” by the wording used in the trailer for Grand Army and the project was anything but “united”.

She wrote: “Sorry 2, 3 writers including me. Aforementioned tweet is just top of the iceberg. I’m sickened they chose this wording for the tweet and are whoring around the American flag in the trailer as though anything about this project was united.”

In the trailer for the show a voice over says: “It matters who hears you, who says ‘I understand’.” Ming references this line in a subsequent tweet where she also claims Netflix tried to underpay the Latinx writer who had just won an Emmy.

She wrote: “‘It matters who hears you, who says ‘I understand’ this shit just writes itself. Really heard & understood us when we told you how exploitative the show was. Tried to underpay the LatinX writer who just won an Emmy meanwhile creator had never worked in TV before but the three of us had.” 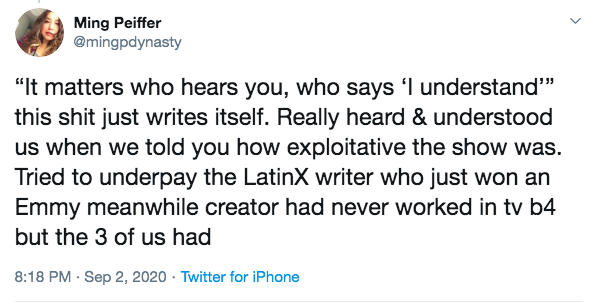 In a series of replies to Twitter users who responded to Ming’s tweets, Ming said white creators “shouldn’t be awarded with shows for abusing writers of colour and stealing their stories to legitimise their appropriation and use of racial slurs”.

Ming later claimed Netflix was fully aware of the situation, but instead hired more writers of colour and reached out two years later to “hear their concerns”.

She wrote: “It is crazy. Netflix was fully aware of it all and did nothing except hire more writers of colour to lend their names to the show. Then had the audacity to reach out 2 years later in anticipation of the release to “hear our concerns” bih we told you what happened 2 years ago!” 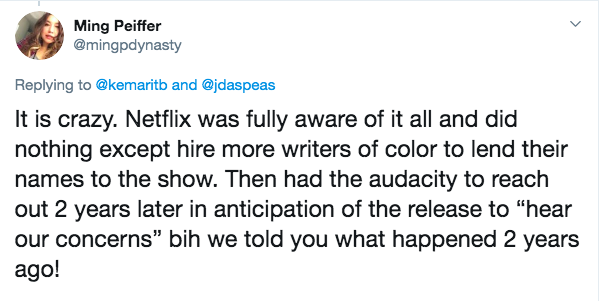 A Twitter user replied to the original trailer posted by Netflix and questioned why “does the movie gotta be depressing time every time y’all get a Black girl lead???” 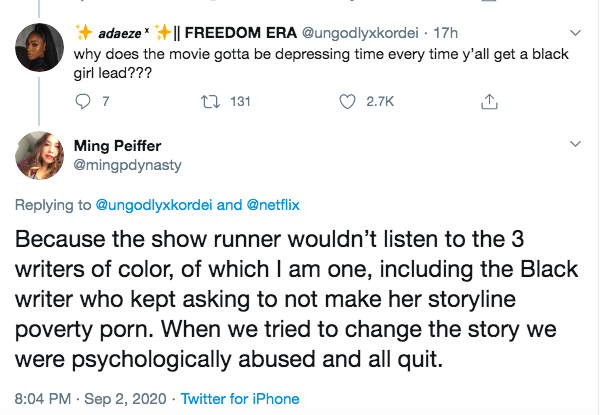 Grand Army is an adaptation of the play Slut, by Katie Cappiello, who was previously a teacher and serves as the creator of the show.

Netflix and Ming Peiffer have been contacted for comment.

•Netflix is being sued for racial and gender discrimination