Kelz claims David was using him as a ‘poster boy’

Kelz from Netflix’s Too Hot To Handle has called out his fellow cast member David Birtwistle for using a picture of him in a Black Lives Matter Post without his permission, and claiming David is using him as a “prop” to get attention.

Earlier today David posted a picture of himself, Kelz and Bryce in the pool, presumably after filming Too Hot To Handle. In his caption David wrote how he wanted to support the Black Lives Matter movement and apologised for what “his people” did to “you” in the past.

He captioned the photo: “Fuck standing on the sidelines. I stand with you, side by side against racism.

“I’m sorry for what my people did to you in the past. I’m sorry for the mistreatment and inequality that you faced. There was no place for it then and no place for it now! This has to stop! What’s going on in the states is obscene. The people are done with the systemic racism and injustice at the hands of police brutality.

“Charging the police officers that murdered George Floyd is only a small step to righting the wrongs that have been done over the years and centuries to black people. If people feel valued, loved and equal parts of society then rioting and looting would not happen. It is a response to the situation the people are in. I don’t condone it but I see why it happens.

“We cannot change the past but we as white people can admit that it was wrong, we can apologise to all the effected and do everything we can to level the playing field. Because starting the same race 300 years late is not fair or equal. Big change needs to happen and it has to come from within the system.  This is a fork in the road America and the direction you take will either make or break your country.”

Kelz then commented on the Instagram post claiming he had messaged David to share a race injustice video which Kelz claims David read and didn’t reply to. Kelz said David had posted the picture without his consent and then when Kelz called David to ask why he did posted the picture David allegedly called him “petty”. 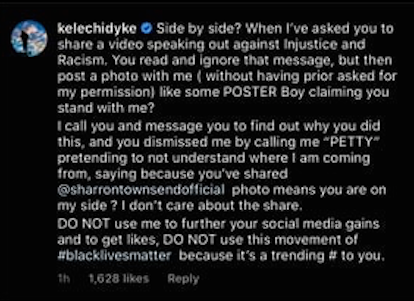 Kelz commented: “Side by side? When I’ve asked you to share a video speaking out against injustice and racism, you read and ignore that message, but then post a photo with me (without having prior asked for my permission) like some POSTER boy claiming you stand with me?

“I call you and message you to find out why you did this, and you dismissed me by calling me ‘petty; pretending not to understand where I am coming from, saying because you’ve shared @sharrontownsendofficial photo means you are on my side? I don’t care about the share.

“DO NOT use me to further your social media gains and to get likes, DO NOT use this movement of black lives matter because it’s a trending to you.”

On his Instagram story Kelz then said David was using the picture of him as a way to gain celebrity status and that he had told him he wasn’t comfortable being used as a “prop”. Kelz also asked David to take down the photo. 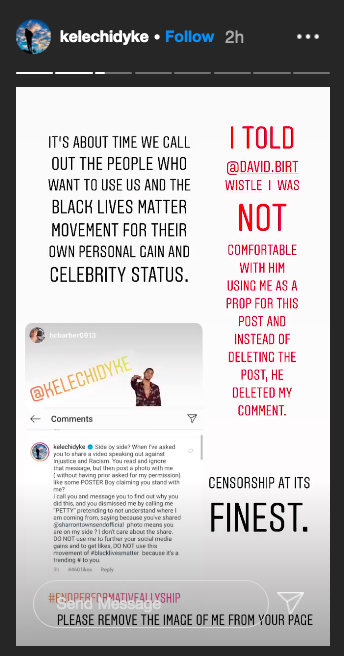 He said: “It’s about time we call out the people who want to use us and the black lives matter movement for their own personal gain and celebrity status.

“I told @david.birtwistle I was not comfortable with him using me as a prop for this post and instead of deleting the post, he deleted the comment.

“Censorship at it’s finest. Please removed the image of me from your page.”

David has since deleted picture.

•These 17 books, docs and podcasts will help you educate yourself on race issues