These 17 books, docs and podcasts will help you educate yourself on race issues

Following the death of George Floyd, the protests for the Black Lives Matter movement have led many people to reflect on how they can act and think better when it comes to racism.

Instagram is full of donation and petition links, but once you’ve donated to help bail protestors out of jail and signed your name to the petition fighting for justice over George Floyd’s death, the work doesn’t stop there. If you’re white this is the opportunity to take a hard look at your privilege and be researching, reading, watching and listening how you can learn more about race issues.

The books, documentaries and podcasts in the list below are by no means a comprehensive list but they are a starting point in learning about privilege, racial inequality and the systemic oppression of black people, not just in America but here in the UK and around the rest of the world.

If you are planning on buying books please consider buying from independent booksellers and always check in your university online library as some of the books will be accessible through them.

Taking Up Space by Chelsea Kwakye and Ore Ogunbiyi

Taking Up Space was the first book as part of Stormzy’s imprint “Merky books” at Penguin in 2019. The book is written by Chelsea and Ore and details their experiences of life at Cambridge as black women.

The book is a guide and manifesto for change and includes conversations with other students about the issues related to racism they face at university.

Girl, Woman, Other by Bernadine Evaristo

Winner of the Man Booker prize last year, this book is an exploration of black womanhood through the stories of 12 black British women.

Though a piece of fiction, the 12 interwoven storylines allows the reader to understand a plethora of black women’s experiences across time throughout Britain.

The Underground Railroad by Colson Whitehead

Another work of fiction this novel depicts situations that were actually happening for black people in America. The novel is about a slave called Cora and her journey to escape slavery.

The book has been described as essential reading for all Americans. Eileen Battersby for the Irish Times said: “History and human experience as well as an artist’s obligation to tell the truth have shaped a virtuoso novel that should be read by every American as well as readers across the world. And it will be, it should be.”

Me and White Supremacy by Layla F Saad

This book is all about teaching white people how to understand their privilege, dismantle it and to stop using it to inflict damage on people of colour, even unintentionally.

Layla’s book is in a 28 day challenge format and shares cultural and historical context to better understand the situations we now find ourselves in.

White Fragility: Why It’s So Hard for White People to Talk About Racism by Robin DiAngelo

Writer Otegha Uwagba said this book should be mandatory reading for white people. The book is about the reactions white people have when they are called out for their racism. It also looks into how we can move beyond just telling people off on Instagram for obvious racism and actually start to look at the practical granular level in which we can all change our behaviour.

This award winning book covers a number of topics about race in Britain. Reni discusses white feminism, the eradication of black history to the political purpose of white dominance.

Reni’s book also covers the murder of Stephen Lawrence and the decision to cast a black actress in the role of Hermione in the Harry Potter stage show. 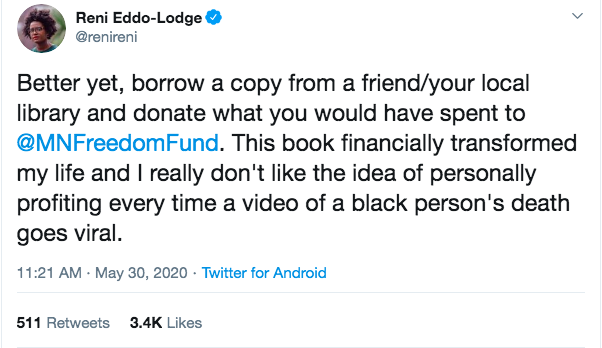 Reni has said on Twitter that she does not wish to profit off of the death of a black person and asks people to borrow the book or if you have to buy it match the price of the book in a donation to the Minnesota Freedom Fund.

This collection of essays features 21 authors looking at immigration in Britain. The conversations look at why immigrants come to the UK, how immigrants are only accepted when they’re winning Olympic medals and what it means to be “other”.

The book features black, Asian and minority ethnic voices from across Britain, showing a wide variety of experiences of what it means to be an immigrant in Britain.

The conversation around black hair in the UK still needs a lot of work as the reactions to Priscilla’s wig in Love Island showed. Emma’s book looks at many cultural and historical aspects of black hair.

It dives into the history of black hair and covers topics such as how it was used to send secret messages which lead slaves to freedom and Kim Kardashian’s use of braids today.

This Netflix documentary created by Ava DuVernay, who also directed When They See US, is an analysis of the criminalisation of African Americans.

The film involves conversations with scholars, historians, activists and politicians to examine why so many of America’s prisons are disproportionately filled with black people.

When They See Us

The dramatisation of the true story of the Central Park Five came out on Netflix last year. The story follows the trial of five teenagers black and Hispanic boys who were wrongly imprisoned and charged as adults for the rape of a white woman they did not commit. 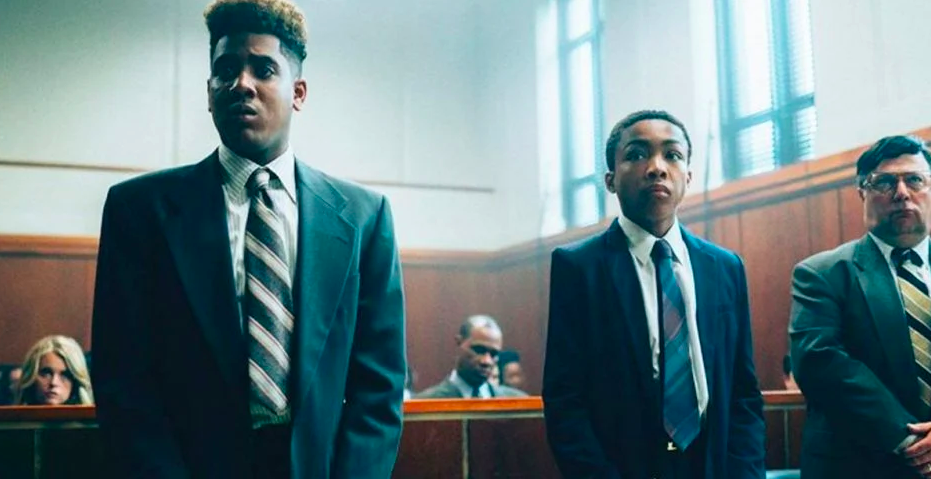 The series depicts the injustice of America’s policing and justice system and Netflix also featured an interview with the five men who have now been released from prison.

This true crime documentary is directed by Yance Ford who’s brother was a black teacher shot by a white mechanic. Yance’s brother, William died and Mark P. Reilly was not charged for his crime by an all white jury.

The documentary was given five stars by The Guardian and applauded by The New Yorker as a “form of justice”.

This documentary on Netflix examines American’s school system and how to this day it is still largely segregated. The film touches on the lack of funding and quality teaching for black children.

Code Switch is a weekly podcast by journalists of colour who discuss race and all the ways it interacts with society and culture. The podcast covers everything from the latest protests, to race and the intersection of coronavirus, to how Dora the Explorer mattered as a way to usher in multicultural children’s TV programmes.

No Country For Young Women

This BBC Sounds podcast is seasonal and is hosted by Sadia Azmat and Monty Onanuga. The two women discuss what it’s like being a British woman of colour in the UK today and all their experiences.

Kelechi Okafor’s podcast features weekly episodes discussing issues related to the black community. The episodes are usually at least an hour and a half long meaning you get a proper deep dive into a topic.

The podcast has just released an episode called “Would you switch places with a black person?”,  it is over two hours long and discusses the death of George Floyd and the recent protests.

Slay In Your Lane: The Podcast

This new podcast by Yomi Adegoke and Elizabeth Uviebinené, who wrote the book “Slay In Your Lane”, looks at the news and pop culture from a black British woman’s perspective.

Introducing 'Slay In Your Lane: The Podcast', a topical news and pop culture podcast from @yomi.adegoke and @elizabethuviebinene 💥 In our first episode, we discuss lockdown routines, and ask what is going on at AfroNation? Listen and subscribe now! #linkinbio

In the most recent episodes they’ve discussed Cambridge’s online lectures and dating in lockdown. Yomi and Elizabeth have also edited a collect of pieces by black British women called “Loud Black Girls” which is available to pre-order now.

The episodes cover topics such as the Black Panthers, the Bristol bus boycott and black GI’s in World War Two. Each episode is around 10 minutes long, giving you the chance to learn a lot of black history in a short space of time.

Or will we, yet again, mistake corruption for incompetence?

Debunked: The reason why TikTok kept asking for your birthday in the last few days

If I get one more notification I will scream

Little Mix net worths: Ok, so just how rich are they all really?

Proving purple is the new black

If that’s the real H I will scream

What is the TikTok weight loss dance and does it actually work?

Is it true or rubbish?

TikTokers are not done with the millennial bashing yet

Um, so Paris Hilton revealed her ‘stop being poor’ t-shirt was actually photoshopped

Sorry but my mind is blown

Revealed: The reality TV shows that produce the richest contestants on Instagram

It taught us all how to stick it to the man

Yes, including Jesy because in my heart she’s still a member

TikTok photo editing trick: A step by step guide on how to do it for yourself

We asked 4,000 students about sexual assault on campus. These are the shocking results

These statistics prove just how widespread the problem is at universities

‘It’s mad that I was considered curvy on the show’