Tap the neck, tap the body, then chop

Picture the scene: You’re having a park date, two metres apart. Coupla cold beers, maybe some snacks. You can’t lean in for the kiss because that would be basically illegal, but you need to do something to set your Tinder match’s heart a-flutter; something which lets them know you’re an absolute demon in the sheets and they should be salivating at the prospect of getting out of lockdown to be with you. Don’t worry slugger, I’ve got just this thing. Meet your new best friend: The TikTok beer bottle challenge.

I know what you’re thinking: isn’t opening a beer bottle with anything but an actual bottle opener really neeky and stupid? And to that I say yes, yes it is, but one day you’ll be faced with the task of opening a cold boi with naught but a knife and you’ll think “shit I wish I’d mastered this TikTok trend when I had the chance.”

What is the TikTok beer bottle challenge and where did it come from?

Here’s the tl;dr: The bottle-chopper taps the bottle neck with a knife twice, then the body of the bottle the same number of times, before slicing the bottle cap at an angle. Assuming you’ve been forceful enough with the knife, the cap will gracefully fly off and you’ll impress not only all of your TikTok followers, but your friends and family as well. Be warned, most attempts of this will end up with you lopping half the bottle neck off, but honestly we take those. 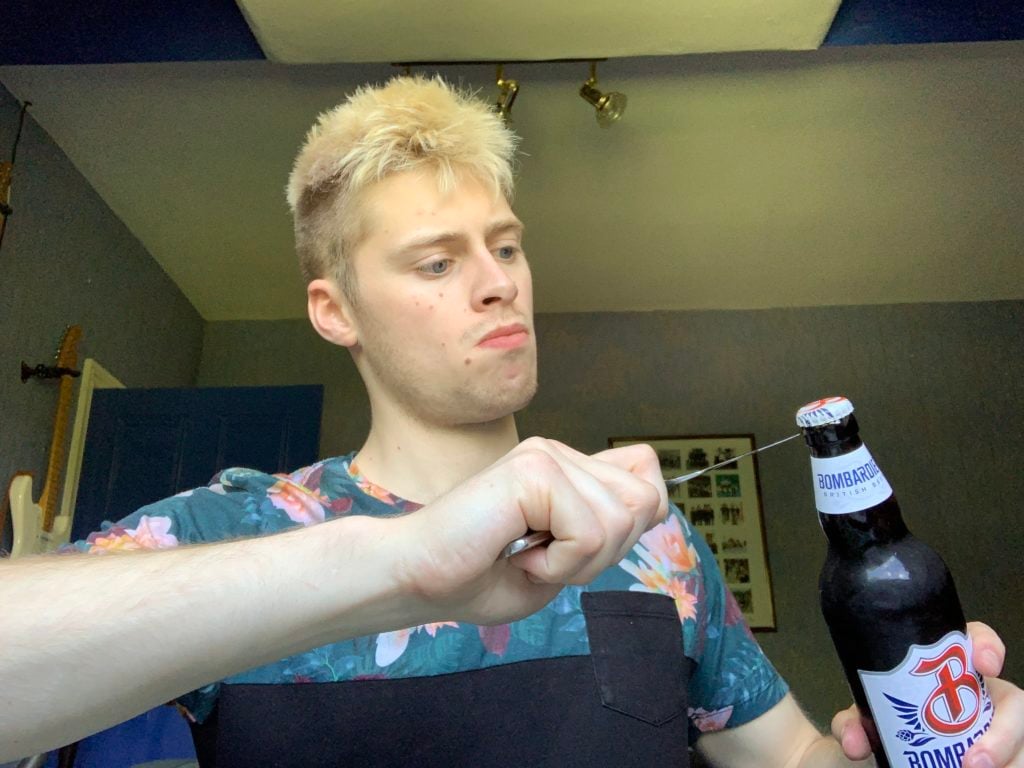 Like all good things on TikTok, it’s difficult to know who did it first. It’s probably been a thing people have done with beer bottles for a long time. What do you want from me?

Does hitting your beer bottle with a knife really work?

As you can see by the many failed attempts below, hitting the beer bottle a few times with a knife is a bit like shaking it. It causes the beer inside to fizz up and pressure to build within the bottle. Sometimes this will mean you’ll end up loosening the cap while beer fizzes underneath it. Other times you’ll overdo it so much the cap will fly off and hit you in the eye (watch out for this). If you nail it however, the added internal pressure or whatever will make the the top of the bottle fly off more easily. Granted this also makes it easier to shatter the entire bottle but hey ho. It is unknown if using another implement would make this method easier.

Can I see some videos of people attempting the TikTok beer bottle challenge?

Yes of course you can you little TikTok goblin:

@jameshallworthI tried doing that challenge where you open a beer with a knife. ##fyp ##foryoupage ##beerbottlechallenge ##fail♬ original sound – jameshallworth

Won’t I cut my lip if I drink from a half-sliced-off bottle?

The answer is yes, probably.

• Strawberry milk is the newest TikTok trend, here’s how to make it