A detailed summary of Zayn and Gigi’s mad relationship timeline

To think it all started with the Pillow Talk music video!

Zayn and Gigi. Gigi and Zayn. Zigi. Gayn. They’ve been through it all, they’re just like a normal couple. Fights, breakups, swapping clothes, secret pregnancies, photoshoots in Vogue, walking the Met Gala red carpet adorned with two metallic, bionic arms – they’re just like us! Ok. They’re not. But I wouldn’t be that interested in the romantic timeline of a normal couple because it’s basically just shag, shag, almost break up, wife them. But the Gigi Zayn relationship timeline is – and I know we love to call celebrity relationships this, but allow me – a rollercoaster. I cried three times reading back this article. I’m just so happy for them.

Let’s throw it back to 2015, where it all started. Gigi was starting to reach proper supermodel stardom, Bella wasn’t even that famous, the UK hadn’t voted to leave the EU yet and, on a similar vein, Zayn hadn’t even properly launched his solo career. Gigi had just ended things with Joe Jonas (um what) and Zayn was a single man. Until…

Gigi has been single for a matter of weeks after ending her four month relationship with Joe Jonas – which I am still stunned was even a thing, but moving on – when she attends Justin Bieber’s AMAs after party in LA. She leaves the party and jumps into the car of Zayn Malik, who’s waiting to pick her up. They’re papped together, which in celebrity relationship terms is like Ye Olde Facebook Relationship Status being changed. In classic “insider source” nature, someone told UsWeekly that they were “getting cosy” together and weren’t bf/gf yet – but they were definitely together.

A few days later and Zayn has dyed his hair the iconic, undeniably fit silver blonde. He poses for a pic wearing glasses that Gigi had been photographed wearing previously.

A few days later, they hold hands in public. It’s kind of a big deal.

They make it Instagram official, which everyone knows is binding your relationship to a public sphere, which makes breaking up particularly embarrassing. Don’t worry, we’ll get to that part. 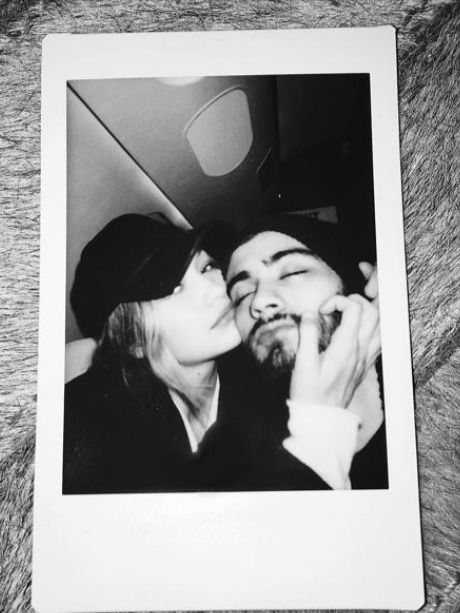 By this point Gigi and Zayn and low key obsessed with each other, and truly in the full swing of the honeymoon phase. He’s spotted as the background on her phone, so we know she’s in deep. Oh, but wait, then Zayn does an interview with Apple Beats One and says they’re “good friends“. Weird. Especially weird considering this music video comes out that same month.

Also, Gigi is filmed singing along to the song. It’s cringe af but we’ll allow it in the name of love.

The couple appear in Vogue, looking extremely in love and well dressed in the sexy Italian city of Naples.

The pair appear on the Met Gala red carpet together, have a little bit of PDA and oh – Zayn is wearing two metallic bionic arms. If you’re confused, it was because the theme was Manus x Machina, so there was a lot of metal and chainmail and technology flying around at this Met Ball. Anyway, back to the relationship timeline.

A few breakup rumours are heard. Everything’s looking a bit ropey. And then Gigi posts this on Insta, so we know they’re still going strong. Everybody in the world collectively breathes out. Phew.

November 2016: Zayn reveals how they met

So we know that the first time they were spotted together was Nov 2015, after the AMAs party – but when did Zigi actually meet? Zayn revealed all in an Evening Standard magazine interview where he says they met at a Victoria’s Secret show after party. Gigi is (or I suppose was, RIP Victoria’s Secret and all of the weird body ideals that went with it) a VS angel – so it makes sense she’d have been there. Apparently Zayn recognised her and just went up to her and asked her out. Bold. I like it.

He goes into even more detail in this video interview, where he says: “I just asked her. It was pretty straight up,” he said. “I just asked her if she wanted to go on a date. I was in New York.”

Yolanda Hadid (Gigi and Bella’s mum) posts a cute pic of them together. No sign of a breakup yet.

May 2018: THEY BREAK UP. The messy Gigi Zayn relationship timeline truly begins.

The pair release break up statements on Twitter, with Gigi’s sounding a little more hopeful than Zayn’s. Interesting.

Zayn proceeds to delete every single pic on his Insta. Not just Gigi. Like… every single pic. This is one of those breakups that you really watch play out on social media like a car crash in slow motion.

April 2018: Zayn stars in his own music with ANOTHER WOMAN

June 2018: They reunite to… play Pokemon 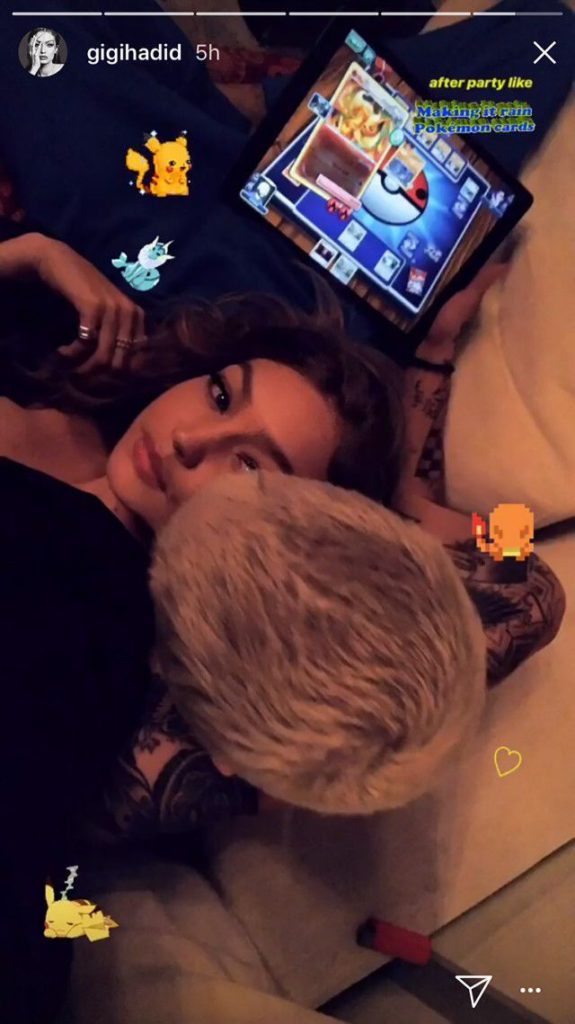 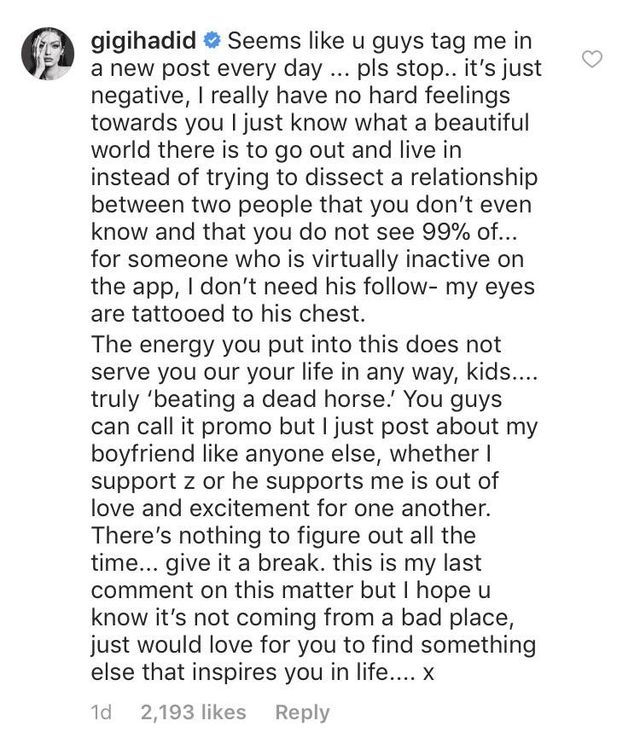 One thing you can always count on is Gigi not caring how famous she is and really mucking into some online beef. Tastes good.

January 2019: For goodness sakes, they’ve only gone and broken up again

A source told E! News they were needing to spend time apart, saying: “They are in different points in their lives right now and decided they needed the time to breath apart from each other. They are still in touch and both hope that things will work out, but their relationship is always up and down.” Nice. That doesn’t soothe me at all. Cheers E! News, son’s crying.

Ahhhh thank God. We can rest.

They break up! A source tells Us Weekly that Tyler is single and that “he and Gigi are no longer together“.

Gigi and Zayn are spotted out in public together again, and a source tells E! News that they reunited during the holidays. “Gigi and Zayn got back together right before the holidays in December,” the source told E! News. “Zayn has been reaching out to Gigi for the last month and she is giving him another chance. She has always loved him and the break between the two was needed. Zayn has been working on his past music and focusing on his health and is in a really good place currently.” Woo!

Gigi posts a pic of Zayn on her disposable account on Valentine’s day. You really do love to see it. 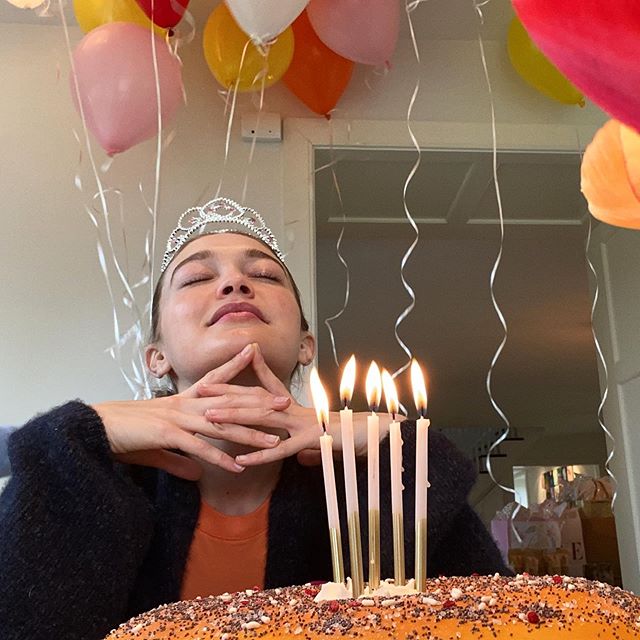 And this brings us to four days ago. Gigi just celebrated her 25th birthday with Zayn and her family, which means they made a rare appearance on each others’ main Instagram accounts.

What a way to top it all off. After that wild ride across four years, TMZ reported that Gigi is expecting a baby with Zayn. That baby is going to be the most genetically blessed child to ever enter this world.

zayn and gigi’s child : i mean you can search it up but here pic.twitter.com/WIQOYVY313

Well, there you have it. Tumultuous and seemingly ending – at least the Zigi timeline had a happy ending.

• Gigi and Zayn are reportedly expecting a baby!