I paid someone online to write my essay for me, but would it fool my lecturer?

For £64.63 you too can sack off your essay and get back to doing what you do best – absolutely nothing

I am a man, I am called Dan, and I am a student. The majority of my time is spent under levels of stress that can only be described as 'pretty high'. I'm paying £9000 a year for access to PowerPoint presentations even my lecturers don’t want to read.

My friends at home who didn’t go to university, who don't know what it's like to live in a house where absolutely anything passes as an ashtray, all have well paid apprenticeships and don’t have early onset Tuberculosis from living in a student property. My point is, student life is tough. That's why I’ve paid an online essay writing service to write an essay for me. Take that, Mum and Dad!

Essay mills allow you to pay someone else to do your work – you tell them what you need and they’ll write it for you. You pay per 275 words, with prices fluctuating based on variables such as the type of work and whether you're undergraduate or masters, they'll even write your whole dissertation for you, depending on how fucking done you are with university.

There are even 'premium' services, an academic ‘Taste the Difference’ range, I presume, where you can pay for add-on extras such as 24/7 support, allowing you to contact the writer in charge of creating your masterpiece.

I, an idiot, decided to try this out. After a quick Google I found a company called Essay Writing Lab. Their website reads:

"Being a student isn’t just about passing your course, although that, naturally, is your main objective. Being a student is also about preparation for your future career and future life. You can only achieve all this if you are able to produce your work on time to a good standard while still being able to work to support yourself and also, have fun social interaction with your friends."

Now first of all, university is 100 per cent about passing your course. I'm not the son of a property-rich City lawyer, I study BA English Literature at a polytechnic university – this is pretty much it for me.

Once you're on the Essay Writing Lab website, a friendly chat box pops up, like a stranger in a smoking area looking to buy a cigarette from you. 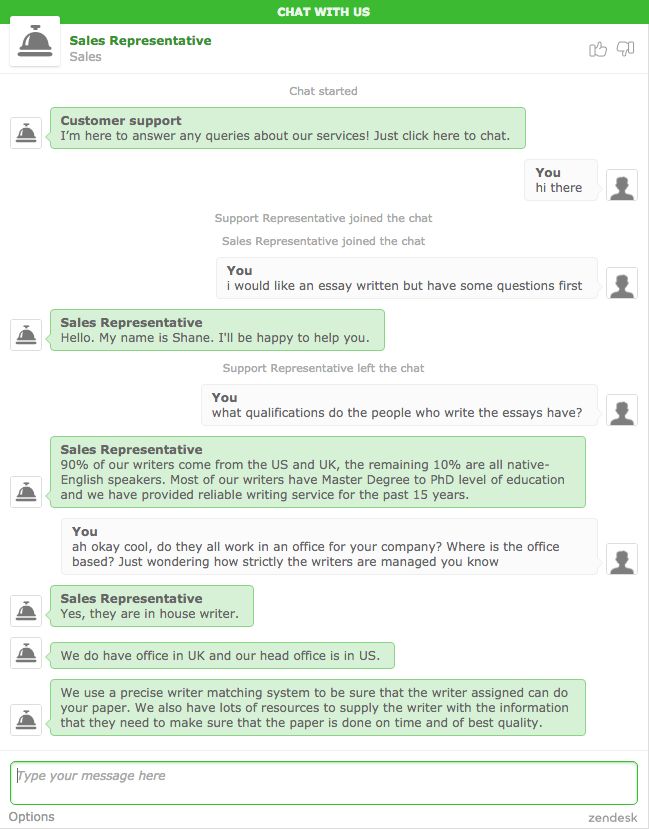 After a brief chat with a robot, I found that 90 per cent of their writers come from the US and UK, with the remaining 10 per cent being native English speakers. Additionally, most of their writers are educated to a Masters or PhD level of education. 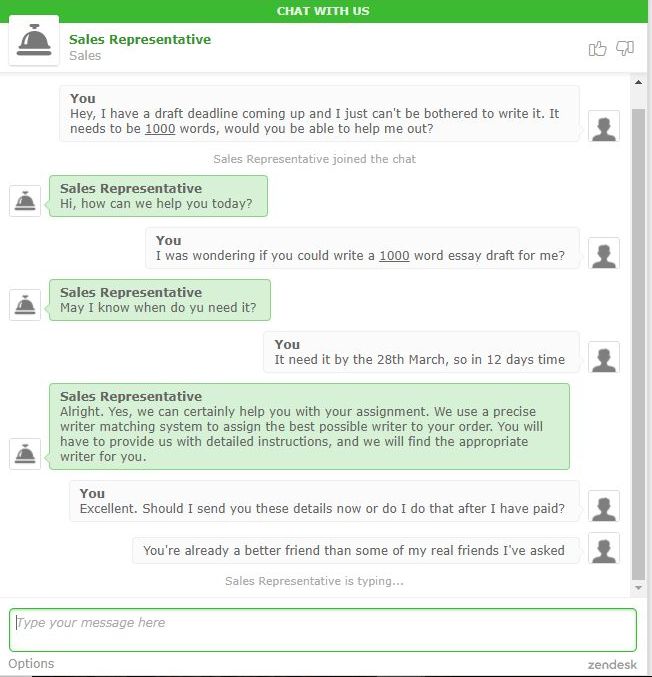 I told them I had a deadline for a 1000-word draft deadline in 12 days time and couldn't be bothered to write it. I was told they could definitely help with my needs. Yet, before I shelled out any of my hard earned student debt, I needed more information.

The Sales Representative told me: "We use a precise writer matching system to assign the best possible writer to your order. You will have to provide us with detailed instructions, and we will find the appropriate writer for you". So, to be clear, I would be doing most of the groundwork on this. I'm a student guys, God, why would you make me do work? Ugh.

"You’re already a better friend than some of my real friends", I said. A rapport had definitely been established. 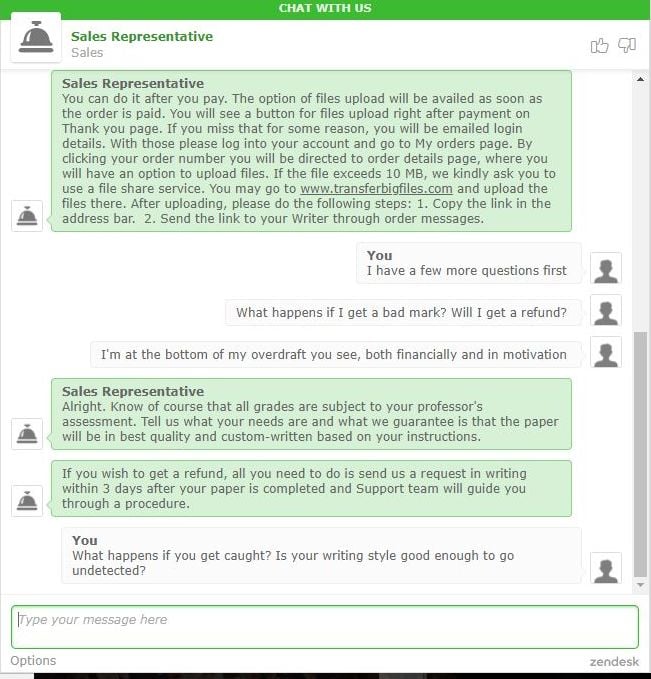 "What happens if I get a bad mark?" I asked, "Will I get a refund? I'm at the bottom of my overdraft you see, both financially and in motivation". I was told they could "guarantee the paper will be in best quality". But what if I got caught? I asked them whether they were good enough to go undetected. "I guarantee you that it will not happen", they told me.

Then they asked to speak to me in person. How could I pass off my socially awkward personality as one belonging to a student with enough balls to buy an essay and pretend it's their own? Reluctantly, I agreed.

Given that the company has a .co.uk website, the call came from an American number (other reports suggest that calls have come from Australian numbers). A lady called Mary answered and although I'm not one to judge I am pretty sure English wasn't her first language. Maybe this wasn't such a good idea.

She began by recapping pretty much everything she had told me in our chat, and reassured me that all of their writers were either MA or PhD qualified. So far, so kind-of-suspicious. The time had come to order my essay, my magnum opus.

I gave them a fake essay title, "To what extent are women restricted by society in Victorian literature?" Pretty solid if you ask me, your lecturer couldn’t have come up with something better than that. I said the essay needed to cover Charles Dickens' Oliver Twist and Charlotte Brontë's Jane Eyre. It would also need to talk about feminist literary theory relating to the texts, historical context, and use credible and academic sources. It would need an introduction and a conclusion to start and end the essay, and a list of sources at the end. I also stated that it must be undergraduate level and quote at least ten sources.

I gave them a deadline of ten days and paid extra for the 24/7 writer support, costing me a grand total of £64.63.

I transferred the money and relaxed, or as relaxed as a person with upwards of £50,000 of debt can be. I was looking forward to getting to know my essay ghostwriter, fully intending to use the 24/7 Support feature I'd shelled out on to get to know Mary or whichever poor soul was being paid to write my essay.

But no. Despite the ten day deadline I paid for, I received my essay in three days. I would have been impressed, were it not for the fact that it’s bad. So so bad. Like, worse than an essay entirely made up of Pitbull lyrics. Click the link to read it in all its glory, in all its utter shiteness.

For starters, the standard of English was sub-par and grammatically all over the place – I’ve sent drunk texts more coherent than what they gave me. The opening sentence reads: “The Victorian era refers to the period when Queen Victoria ruled the British monarchy”. THAT MEANS NOTHING. WHAT DOES THAT EVEN MEAN? At one point they call Oliver Twist ‘Oliver Twists’ and call Jane Eyre character Mr Brocklehurst ‘Mr Blocklehurst’.

In the bibliography they cite a website called grin.com, which upon inspection seems to be website where you can sell your essays, and a website called philpapers.org, which I assume is a website run by a man called Phil. I could look it up, but that would require putting in effort and at this point I'm fully in character as a student who is totally fucking done with university, so it's a no from me.

But I’m no expert. As I’ve said previously, I’m merely a humble BA student at a polytechnic university, I have no right to criticise what could be an esteemed piece of literary criticism. So I emailed it off to my tutor to see what he thought.

“I was so annoyed when I was reading it”, he told me. Straight out of the blocks, it annoyed him. The man marking my dissertation. Great start. “I was expecting a first if you paid for it, how much did it cost you exactly?” he asked. I told him. He laughed. “You could go to town on it really”, he said, adding that it paid little analytical attention to the texts, used no literary theory, had a generalist and often conversationalist tone, and used poor references (that were also referenced wrong).

“If a student gave me this I’d ask them 'what on Earth have you learnt?’ It’s almost like they’re taking the piss”.

But what mark would it achieve if I were to submit it as my own work? Mary had guaranteed me that "The paper will be in best quality", so was this piece of trash really worth at least a 2:1?

“Maybe a 2:2, probably less than that”, he said, before telling me: “The more you look at it the worse it gets”. Eventually, he settled on a mark of no higher than 49 per cent, third class honours. THIRD. CLASS. HONOURS.

I had one final question – would he have guessed that I had bought the essay had I officially submitted it as my own work? “No. No one would buy an essay worse than what they could’ve written themselves. If it was stellar work I might have thought it had been bought, but not this.”

There was only one thing to do – I went back to Essay Writing Lab to complain.

I opened up a new chat, Third Class Honours in hand. "I recently bought an essay from you and I was told it would be in the highest quality, however I only received 49/100 when I handed it in", I said to the 'Support Representative'.

Mary had guaranteed a quality piece of work, it should've been written by someone with at least an MA degree, so what did they have to say for themselves?

"I apologise for the inconvenience", they replied, "But kindly be advised that we definitely do not guarantee a good grade on our website as it would be a subjective matter by your professor". 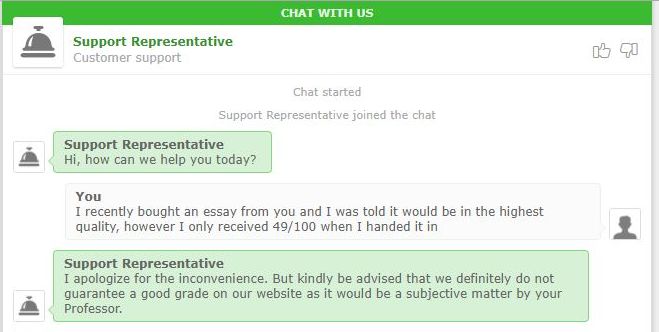 This is true, they had told me that the quality would depend on what the marker thought, but Mary had guaranteed me – she used the word guarantee explicitly – that the essay would be in good quality. I mean, look at the essay. Read it. It's a disaster film starring Dwayne 'The Rock' Johnson. It's shit.

Dejected, I gave up. Their terms state that you must claim a refund within three days of the completion of your order. I had left it too late.

So here I am, I, a BA Literature student at a polytechnic university, a man who once spent €23 on Pick’n’Mix in France, had been scammed again. I’d wasted my money, a lady in an undetermined location had lied to me, and I’d annoyed the man in charge of marking my dissertation.