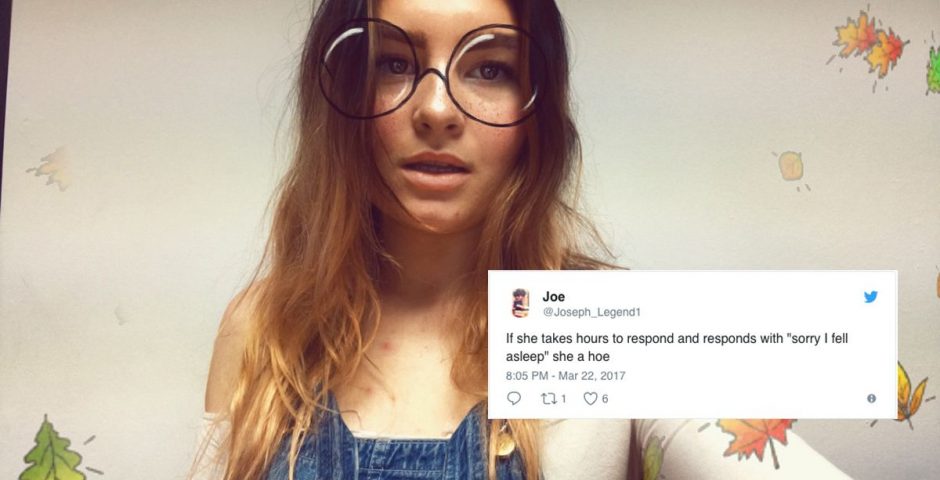 Things girls weren’t allowed to do in 2017, according to men on the internet

Are you taking a selfie at the gym? BASIC

Women can't do anything without being criticised and 2017 was no different.

You own a glittery phone case? You're an active Snapchat user? You like pumpkin spiced flavoured products? Shut your legs, hoe.

I mean I get it, those "he is my everything?" boyfriend posts make me vom a little bit in my mouth too. But there is no need to threaten to gut some seventeen year-old from Southampton just because she took a picture of her avocado and salmon brunch with 23 different hashtags.

Just let the basic bitches breathe man. You can take gym selfies on the stepper machine and use ? emojis and still be a good person.

But what else did people get really, really mad at women for doing this year? Here is the comprehensive list.

Contender for most basic/whitest thing to do: girl throwing fall leaves in air for a IG boomerang

If you use a dog filter regularly to hide 25% of your face you are either a hoe or someone with a putrid malformed nose.

Snapchat basic bitch went from the dog filter to the round glasses with freckles.

You are a terrible person if you tag photos, "drinks with this one"

These tweets might not be gendered, but lets be honest, 80 percent of the people saying this are female.

Saying "boy did good ?" is also off limits

"Lunching"
"Brunching"
"The boy did good"

Your just pissed because you GF never says you did good.

Pose with balloons on your birthday

If a girl take pictures with these balloons it's a 90 percent chance she a hoe. pic.twitter.com/4y0Y8tcypc

No honestly this makes you a hoe, even if you have been doing this since you were 12 years old.

Enjoy Drake's music? You're a slag then

Okay just wake me up when the basic hoe's are done quoting lyrics from Drake's songs.

She a hoe if she knows all the words to passionfruit already.

Alright Adam, like you don't go mad when "Started from the Bottom" drops in the club

Wearing leggings makes you a THOT

If she wears tights/leggings in public she's a basic hoe

If you're the hoe that wears leggings with ugg boots & the basic braids with the smallest crop top. You a hoe straight up. Bye.

Chokers are also not acceptable

Better not wear chokers gals, you don't want to put Devin off!!!!

Your choker needs to be tighter….tighter….keep going….tighter…there you go. One less basic hoe.

Watch these guys turn up at Urban Outfitters with a bloodied axe.

Need to know if buying a Unicorn coffee at starbucks just made you more basic than what you already were.

Less than one week ‘til Christmas ?✨? and only 3 days left to get 20% OFF customized phone cases and laptop skins from @caseapp! Use code KIMMYKITTA20 at checkout to stock up on all your last minute gifts! ? #caseapp #giftidea #ad

Girls with ambition? Absolutely not

You should probably bin your self-confidence too

She a hoe if she claim she 'confident' and 'outgoing'

if she bring up astrology she a hoe

If you go to the gym to improve your body but like, you're quite chill about it. To gain respect, you must try harder

Everybody knows that 1 hoe on snapchat that is always @ da gym flexing her "progress" but she still look like the same basic bitch to me.

If your girl runs on an eliptical/treadmill while reading a book at the gym then that hoe basic.

Sorry Chas, but this just sounds plain enterprising to me.

She a hoe if her microwave dirty?

She a hoe if she own a olive green jacket

You're okay if the bomber is in forest green or mint.

Seriously, like don't suffer from a mental illness, it's really basic guys

Basic Bitch Tweet " IM ALWAYS SO SAD, I MUST HAVE DEPRESSION"

Women need to just stop doing stuff. Like remove yourself from social media, only eat plain beige food, don't use popular phrases like "yaaas kweeen", bin any clothes that make you feel comfy, in fact just wear black long sleeved tops and skinny jeans at all times. Continue shaving off parts of your identity until you become a featureless nub, then maybe, just maybe, you will become an acceptable member of society.

she a hoe if she breathes oxygen