For some, the most important aspect of their years at university is the knowledge they’ve acquired. For others, it’s the friends they’ve made, the career they’ve already begun paving or the independence they’ve gained. But for some, it’s all about the perfect graduation photo.

We all know there’s more to life than photographs, but they’re a great way to hold memories. It’s probably going to be one of the most memorable pictures of your life, so it’s worth making it the best it can be. I asked models and photographers to share their expert advice on how to take the perfect graduation photo. 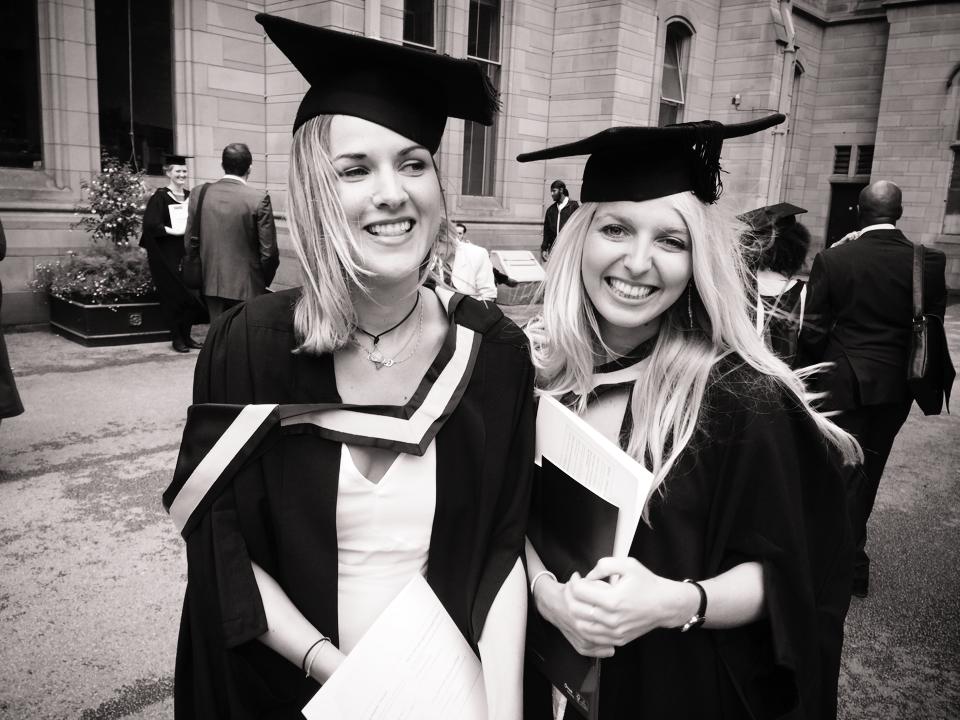 Mime the word ‘hey’ or ‘HAA’ to create a convincing smile

“Definitely smile”, says model Beth Andrews, “you’re graduating from university and it’s a whole day of celebrating that achievement. Your friends and family will want to see you happy.”

According to experts at Models Direct, the best way to achieve a natural looking smile is by miming certain words. They said: “When you say ‘HEY,’ you produce a very natural facial expression. Say ‘HEY’ and hold it – you will notice your tongue is coming forward and your lips are apart. Now try it again, saying “HEY” with a smiling expression.”

To take it one step further and make it look like you’re ecstatically laughing at something really funny, they recommend a “HAAA”. Remember to focus your gaze on someone or something to avoid looking sinister. 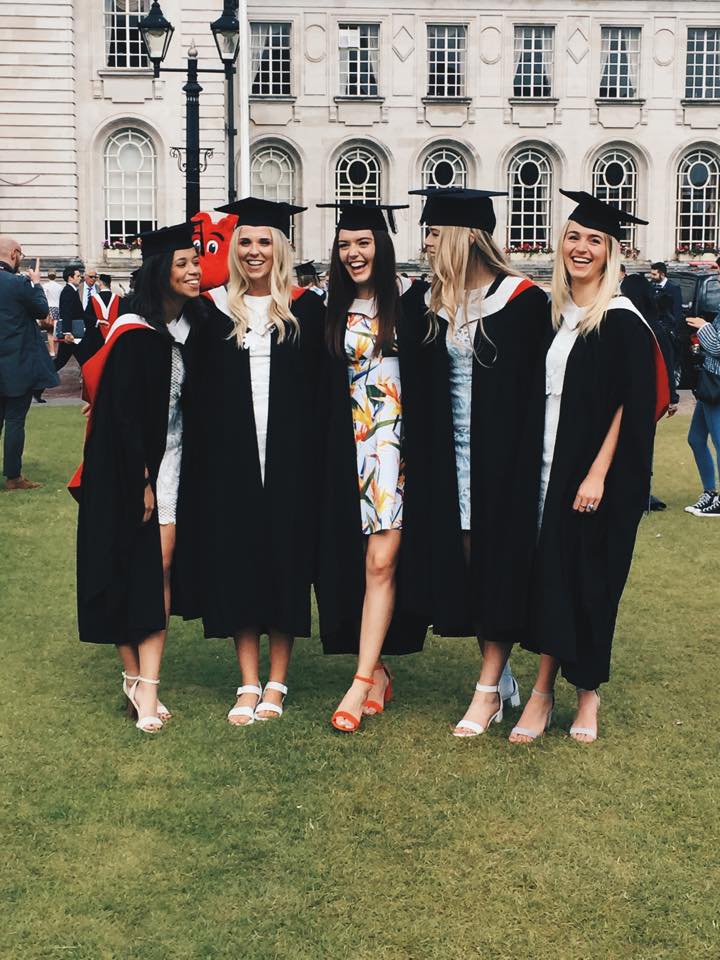 Once you’ve mastered the art of faking happiness, you can focus on making the rest of your face. Beth recommends closing your eyes and opening just before the picture is taken to avoid blinking, and putting your tongue behind your teeth to avoid a goofy smile.

To avoid a double chin, she suggests elongating your neck and tilting your head forwards slightly, “it feels unnatural, but looks so much better.” 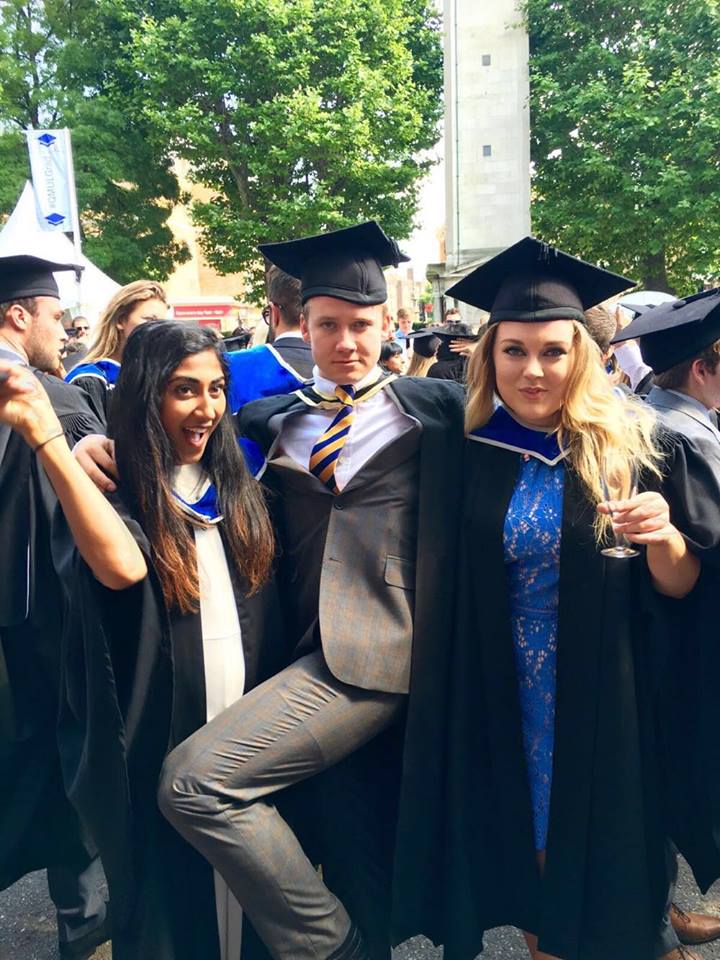 When it comes to composition, use ‘the rule of thirds’

According to photographer Romany Francesca-Mukoro the “rule of thirds” is key, a photographic composition principle that allows for an image to be broken down in thirds, both vertically and horizontally. It lets the photographer easily see a point of interest, which would be the graduate.

Romany told me “it allows for pictures to come out centred and focused on the subject making the image personal and and allowing viewers to interact more.” 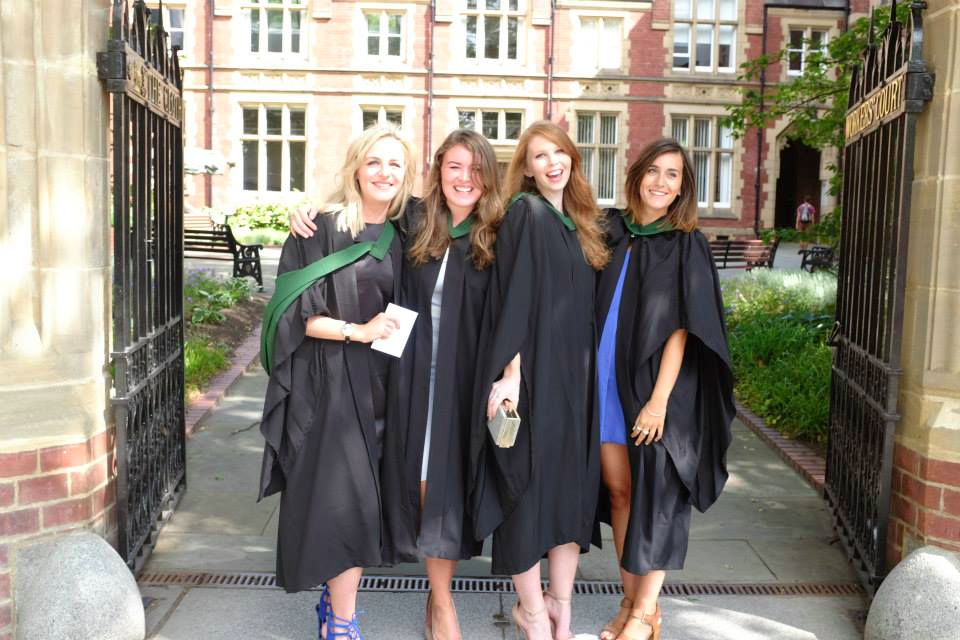 Make sure you’re bang in the middle of the shot

“When taking an image I always like to look at the background and where the subject fits best”, says Romany, “for example there is a term used called ‘Negative Space’ which refers to a space around a model/subject which can determine whether the pictures is good or bad.”

Basically this means you won’t stand out if there’s too much empty space around you. Romany suggests standing in the middle of the frame, “no matter what distance they are, whether it’s a full portrait or a medium shot or long shot.” 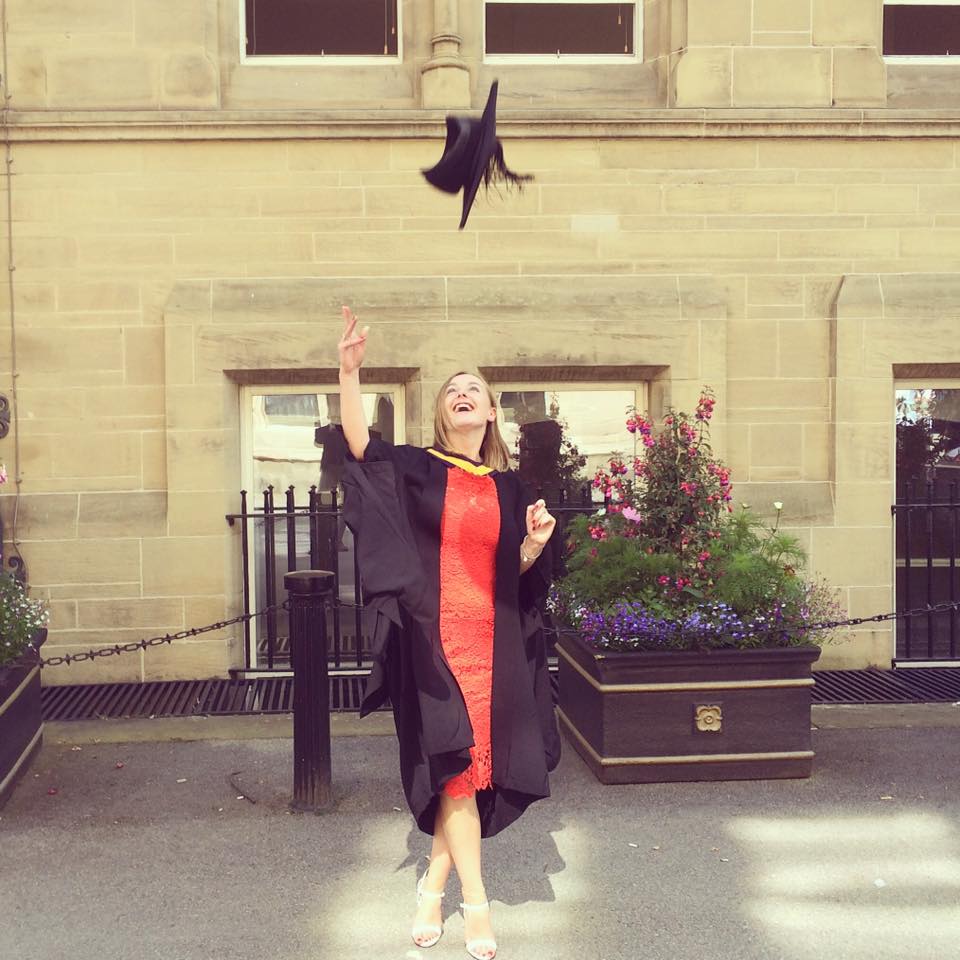 Try and make it symmetrical

“I find symmetry relatively important when taking graduate images for the reason that symmetry always evokes balance,” says Romany. “Balance creatives positivity, which is what you want from a graduation picture.”

Try some shots from different angles

Symmetry is great, but can often make photos quite bland. Romany combats this by shooting from low angles “to empower the model and make them seem ‘great’, and all the positive connotations that go with that.” 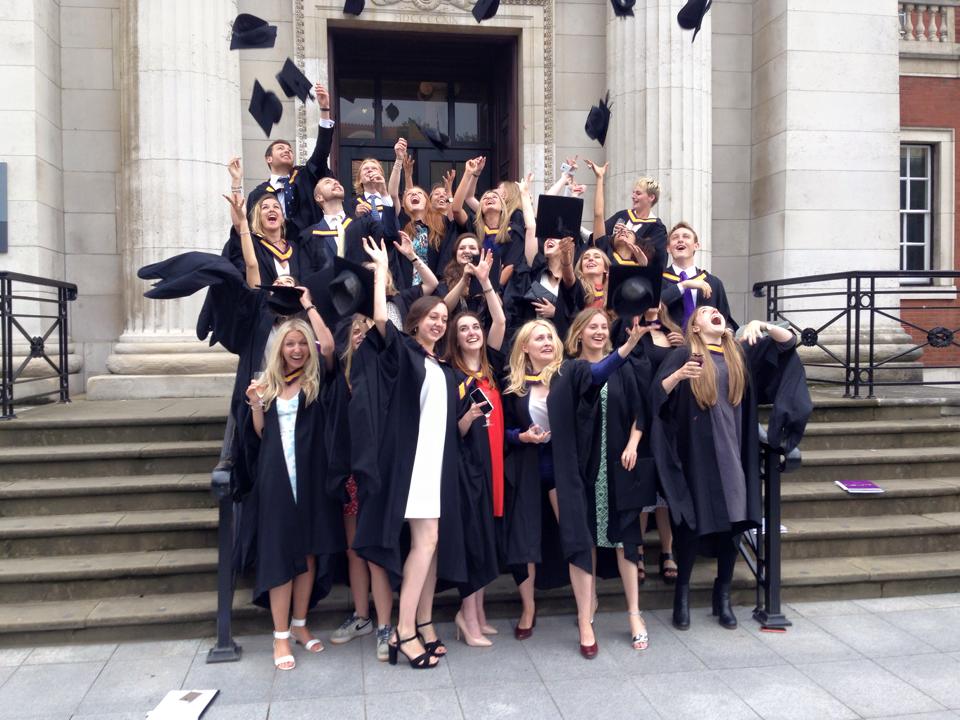 As a photographer, Romany suggests getting whoever’s taking the photo to face you and just start having a conversation, “it makes them more comfortable and not stiff in the shoulders or static arms.”

“With a graduation picture the main focus is the model in a gown”, says Romany, who suggests either smiling and moving your gown from the bottom, touching your hat or jumping. 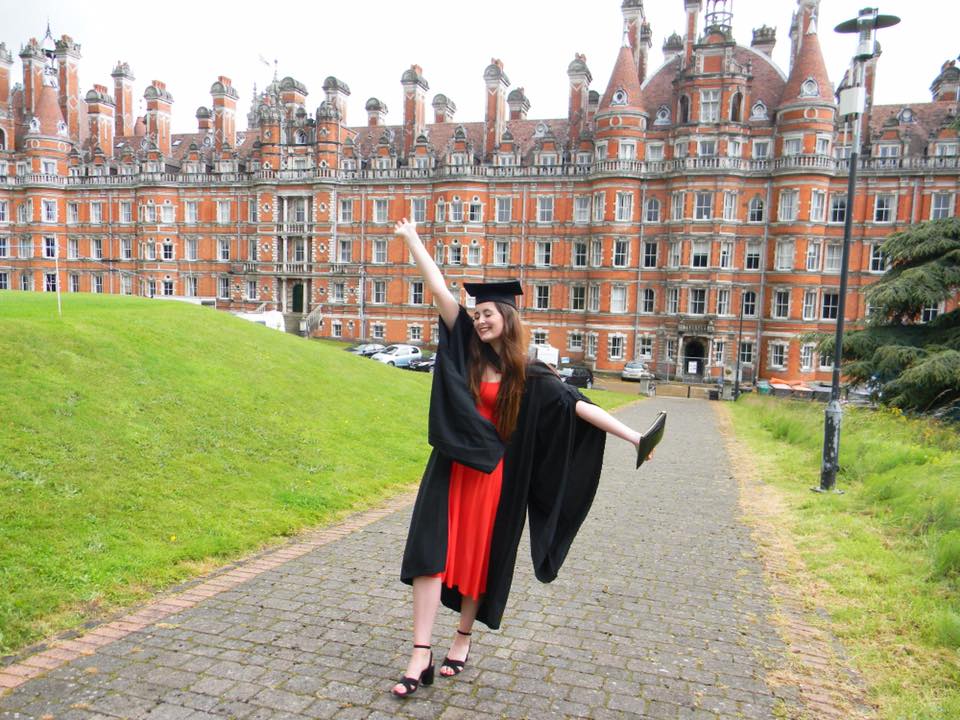 “Don’t worry about actually trying to catch it because you probably won’t and it’ll make the photo look more awkward”, says Beth. “Instead, focus on how your face and posture looks, reach your arm up in the air, look in the right direction, and smile.”

She also recommends throwing your cap slightly forwards instead of directly above your head, “mine landed on a friend’s head after throwing it directly up, they’re quite heavy so it was really painful.” 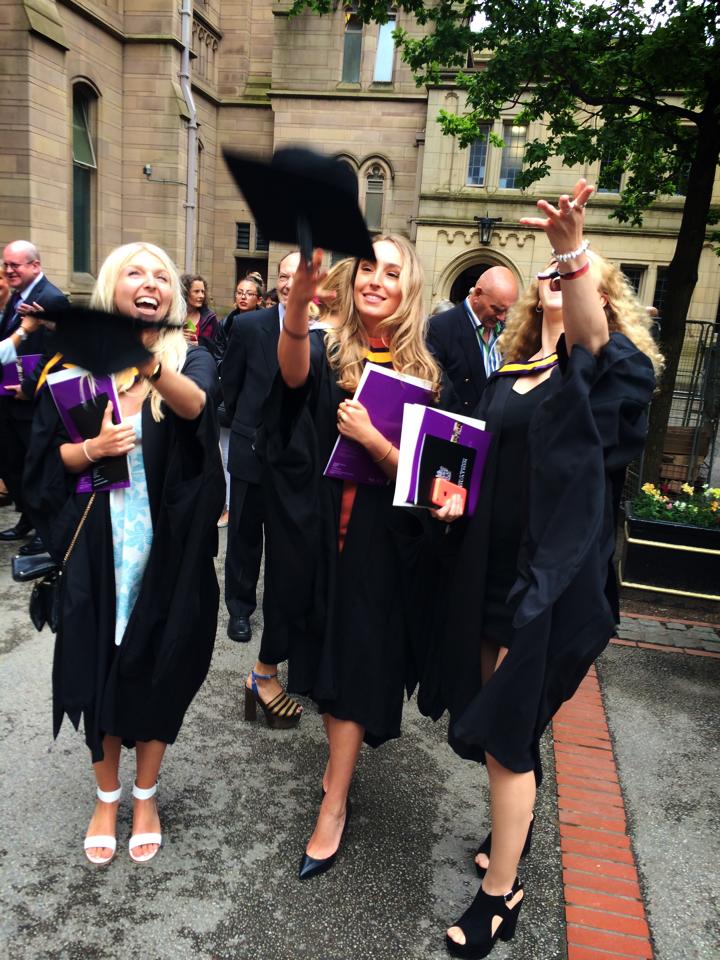 Lighting can make or break a good picture, but there’s things you can do to make sure your photograph is the best it can be. “If there is great wonderful lighting it’s always important for the model to face the light (sun) rather then stand behind it where they would be in the shadows.