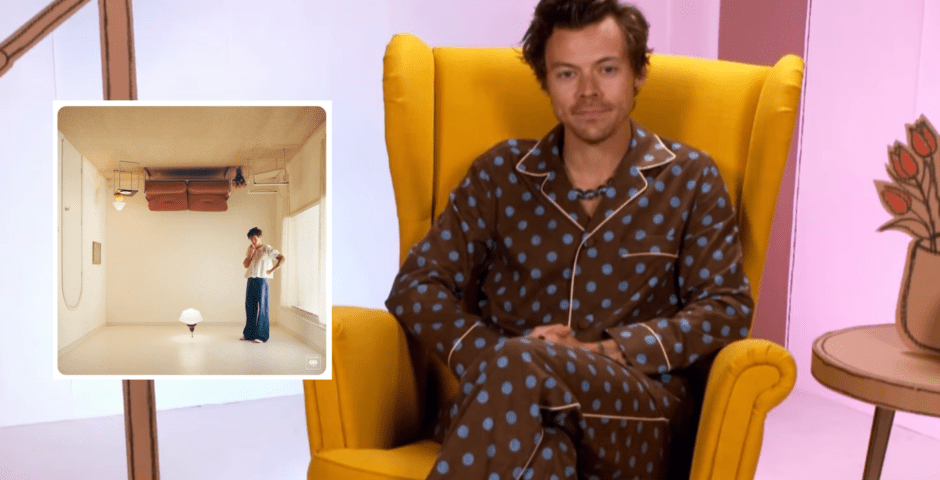 Ranking all the songs on Harry’s House, from sad bops to ultimate bangers

It’s been precisely one weekend since Harry Styles blessed us all with his third studio album, Harry’s House and it has been, simply put, quite a chaotic couple of days. The album is smashing records left, right and centre and is no doubt a masterpiece of indie pop, ‘80s synths and intimate lyrics.

However, fans are absolutely torn between sobbing uncontrollably to Matilda and dancing with no shame right after on the track Cinema. So, as a self-proclaimed die-hard Harry fan (as I sit and write this, my Harry Styles cardboard cut-out looms over me), I’ve taken it upon myself to rank every song on Harry’s House.

It’s simply not possible to rank them from worst to best – this is a scale from how likely I am to sob or bop, from Sad Bop to Ultimate Banger with a bit of some Immaculate Vibes in the middle. Now, I’ll be on my way to see him at Love On Tour and scream Music For a Sushi Restaurant at, well, you guessed it.

Here’s the definitive ranking of all Harry Styles’ songs from Harry’s House, on a scale of likely I am to either cry or get my groove on:

So, we can all admit it – Matilda has us all in a chokehold. This track takes the crown for being the saddest song in my Sad Bop section; literally all the people I’ve talked to about the album have said that they were sobbing when they first heard it. And rightfully so, because Harry has absolutely no right singing: “You don’t have to be sorry for leaving and growing up” without expecting us to break down. Harry even admitted that he played Matilda for a couple friends and they all cried. Same tbh.

“You can start a family who will always show you love” – Matilda by Harry Styles#HarrysHouse #harrystylesTODAY pic.twitter.com/44mUARsBZJ

Ok, we were all definitely tricked by the title. Instead of throwing it back, we’re throwing up, screaming, and crying because Harry sings: “I’m not worried about where you are or who you will go home to”. Is that so, Harold? This ballad reflects on a relationship that is slowly fading away and when paired with sweet, intimate lyrics like: “You never saw my birthmark”, it’s more than enough to make us weep.

To all the crappy boyfriends out there: this one’s for you. This song is basically Harry’s equivalent to saying that men are trash, and honestly? Good for him. This acoustic guitar bop reflects on mistreating partners and people who deserve better. It’s raw and speculative: “He starts secretly drinking, it gets hard to know what he’s thinking” and earns the third spot on the Sad Bop section.

This one was hard. Whilst the upbeat, ‘80s style sound might sound cheery, we all know the lyrics are nothing short of devastating: “Harry, you’re no good alone”, “What kind of pills are you on?”, “Your daddy lives by himself”. Nonetheless, this chart-topping banger is heart wrenching – landing it fourth on the Sad Bop ranking.

Love Of My Life

The closing track of Harry’s House, this song reflects on a past relationship where Harry realises, far too late, that the person in question was always the one for him. It’s desperate and contemplative – he sings in the chorus: “You were the love of my life, maybe you don’t know it’s lost ‘til you find it”. Ouch.

Personally one of my favourites, this song is the happiest in my Sad Bop ranking. It combines both a slow start and sad lyrics with an explosion of drums and synths later on, and I’m all here for it. I claim Satellite as the underrated banger of Harry’s House later on – I mean, with lyrics like: “You got a new life. Am I bothering you?” how could you not be obsessed?

These next few songs are my Immaculate Vibe selections: they’re definitely boppy vibes but with just a tinge of sadness to keep them from being in the Ultimate Banger section. With Keep Driving, Harry creates a song about ignoring relationship problems into something fun? He combines cosy lyrics like: “Maple syrup, pancakes for two” with this lines like “Cocaine, sideboob, choke her with a sea view” and, well, I’m rather torn. Should I cry or start dancing? Maybe both? This is why it’s the saddest song in my Immaculate Vibes rank.

i find beauty in harry’s house lyrics being so nonsense it’s like cocaine maple syrup on pancakes you make me hot when you dance little freak keep driving you are the love of my life i spilled beer on your friend yoga tea sunglasses. this is harry styles

Ah, another cocaine reference with this one. Harry, you doing good? The lyrics on here are sickly sweet nevertheless: “If I was a bluebird, I would fly to you”, “Dip you in honey so I could be sticking to you”. It’s such a cute bop that it’s easy to overlook the hints of brokenness within the lines: “You never listen, I hope you’re missing me by now” that come just after the dreaded cocaine lyric.

The happiest of the Immaculate Vibes songs is definitely a big one – with his faraway vocals at the start and the heavy guitar beat, we kinda gloss over the fact that when he sings: “There’s no getting through the grape juice blues” he’s literally talking about getting sad and wine-drunk. Honestly, a hard relate at times ngl. Either way though, there’s some serious immaculate vibes here.

So we’ve finally reached the Ultimate Bangers. These songs are just sexy, happy bops that I can dance shamelessly to. Cinema is just that – it’s a light-hearted, fun anthem that is so tongue in cheek. I mean, he literally sings: “I bring the pop to the cinema” and “You pop when we get intimate”. We get it Harry, you like film directors, gosh. I feel like we should also appreciate his vocals that howl in the background of the song more, ‘cos wow.

Once again, Harry literally sings: “She said: ‘Love me like you paid me’”. What more needs to be said? Kiwi reference? Someone give this man a cold shower – he’s clearly been “living in a daydream” for far too long but honestly, at this point, we’re all loving it. An Ultimate Banger, through and through.

Ok, getting to my absolute faves now. This song is such. a. banger. It’s been stuck in my head since he debuted this classic, ‘70s style bop at Coachella and honestly goes so hard. I literally scream all the lyrics, alone, in my kitchen, with no shame whatsoever: “If you’re feeling down, I just wanna make you happier, baby”!

Music For a Sushi Restaurant

Words cannot describe the moment I heard this song for the first time. This is hands down the ultimate banger of the whole album.

When I say my mouth was on the floor – there is just an unmatched sense of euphoria whenever I hear Harry scream: “It’s cos I love you, babe, in every kinda way, just a little taste”. I mean, the trumpets that follow? The jazz? The funky pop? The panning beats when I wear headphones? Also, the fact that sushi is my favourite food makes this song a million times better.

• All of One Direction’s X Factor performances, ranked from alright to pure, terrible chaos