There was a time, believe it or not, when Casa Amor was a shock to us all. The Islanders didn’t know it was coming, and the viewers didn’t know what to expect. It packed a huge reality telly punch to the gut and had couples risking it all for a new bit of talent they liked the look of and had only known for a few days. It used to change the course of the rest of its Love Island season forever. In Love Island 2021, they were waiting for it. Counting down their Love Island days till Casa Amor. Aaron said in his exit interview that “the first few weeks I wanted to be there to do Casa. It’s part of the experience. I would love to do that with the boys.” It’s no longer a twist, it’s a tradition. And not a nice one. 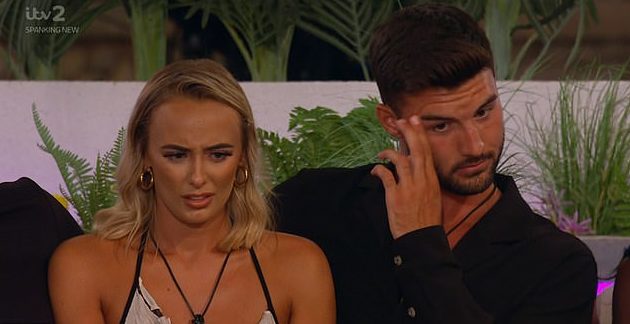 In last night’s episode, we witnessed a Casa Amor massacre unfold in front of our very eyes. Every new couple crumbled. Kaz told Matthew she would be speaking to Tyler again and things went downhill. Chloe unceremoniously called it off with Dale. Faye binned off Sam. Clarisse fumed at Tyler for wanting to still speak to Kaz, and Toby? Toby, Toby, Toby… After all the hell he’s caused to pursue Abi, he’s binned off her AND Mary and is now right back to Chloe. Mabel’s coming in to sing a song tonight, let’s hope she’s not next on his hit list.

The only couple who’ve survived from Casa Amor are Hugo and Amy. Remember them? It’s fine if not, because the producers seemingly don’t either since they haven’t even had a crumb of screen time for the past three days. Casa Amor is not what it used to be, and one night of emotional recouplings and drama is nothing without some pay off.

What is the actual purpose of Casa Amor in today’s Love Island landscape?

What started as a twist has turned into a series landmark, something Islanders are waiting for. This instantly takes the wind out of Casa Amor’s sails. When it first started and the Islanders realised the lads had gone elsewhere, it was a shock. The unknown of what was going on there was the whole point. Now, everyone knows. It simply exists as part of the formula, and serves no good purpose.

so basically no one is even interested in anyone they brought back from casa amor?? a week of pure chaos for it to just be the same as before???? #LoveIsland pic.twitter.com/hKTXwRPz6Y

Is it there for tradition or is it there to shake things up? A twist shouldn’t remain when it is no longer a twist. Love Island is the biggest reality TV show in the country, and will have the best producers in the industry working on its formula and structure. Surely there’s someone who can come up with a new midseason shake up to create drama? Say what you want about Big Brother, but the producers tried a new twist and task every season that always managed to be entertaining and novel even when the housemates cast weren’t.

After the deaths of Sophie Gradon, Mike Thalassitis and Caroline Flack, Love Island producers have vowed to care more about the mental health of its alumni than ever before and increasing its aftercare after it creates and releases armies of social media influencers into the lion’s den after they leave the villa. It’s interesting to me that the show can say it takes mental health seriously whilst maintaining a crucial part of the season’s structure that’s by far the most emotionally taxing on its contestants.

Everyone to the Casa Amor people #Loveisland pic.twitter.com/9SeiVcKbAt

Casa Amor, in essence, exists to cause upset. It exists to cause break ups. Love Island can refer to it as a relationship test all they like, as can straying men like Liam, but the fact of the matter is that it’s a shitstirring device. The formula is upsetting enough on its own, but when producers insist on sending picture postcards with no context to the worried women in the main villa that manipulates situations and makes them act in ways they wouldn’t if they hadn’t seen it, how is that fair on anyone? Teddy and Faye went through such tears and emotional distress before they (thankfully) sorted things out, but it wasn’t fun to watch. It wasn’t good telly. It was just sad.

It’s a waste of the new and old Islanders’ time

Casa Amor is week of Love Island disruption with no pay off. The Islanders we know and love get put through the ringer for nothing. The army of new people we have to quickly get to know have to spend their week feverishly grafting in hope to keep their place, but there’s too many of them for us to get attached. Half of them get no airtime. We saw not a minute of Medhy, Kaila or  Salma. Could you pick Jack Barlow out of a crowd? Didn’t think so.

Going into Love Island during Casa Amor Must WRECK your self esteem. You either get zero screen time or, like Mary and Sam, get used as a pawn in the original Islanders’ love games. All you leave with is a water bottle and trauma ://// #LoveIsland

One night of good recoupling telly is no longer enough for Casa Amor to be worth it in the long run. Producers should look into new ways to keep Love Island exciting and seasons unpredictable, because reality TV becoming formulaic and not innovative is a death sentence for ratings and fan reception. It’s time for a change, for everyone’s sake.

• An ode to Toby: The chaotic villain of Love Island 2021 we all needed