Here’s exactly how Legally Blonde was made, from the bend and snap to Bruiser being a diva

It wasn’t originally going to be set at Harvard?!

Legally Blonde is quite literally the best film of all time. It really did give us so much – from the perfect pulling technique in the bend and snap, to envy over Elle’s incred wardrobe and a whole load of iconic quotes. But how much do you know about the actual making of the Legally Blonde flm, and all of the secrets behind its production?

Luckily for you, over the years the cast and crew have spilled a LOAD of juicy Legally Blonde production secrets. The film has now officially been out for 20 years, which means there’s been plenty of time for lots of gossip to come out for us to all enjoy.

Here are all the production secrets behind Legally Blonde:

Reese Witherspoon was the only actor they really considered for Elle

Legally Blonde writers Karen McCullah and Kirsten Smith, Jennifer Coolidge who plays Paulette, and cinematographer Anthony Richmond, all spoke to Metro and spilled a load of Legally Blonde production secrets and insider goss for us.

Screenwriter Karen told Metro Reese was the first actor to get the script for their consideration – there was a short list of names which Karen would not reveal, but Resse was right at the top of it.

She said: “She jumped on and it was a pretty great, smooth process. We didn’t go out to any other people.

“There were a few people on the list, but she’s the only person who any of us had a conversation with. Once she read it, It was hers.”

They focused on Elle’s power rather than looks

Kirsten, one of Legally Blonde’s screenwriters, said focusing on Elle’s power rather than sex appeal was “a really free way to make the movie”.

She said: “I felt like women could really identify with her ethos and her true independent spirit, her ambition and goals, her intelligence and everything that she was. And she was also being really hilarious at the same time.”

Whilst Reese Witherspoon, who plays Elle, is obviously beautiful, Kirsten says it was important that she was never fetishised in the film. She said: “Even the scene when she jumps out of a hot tub in a bikini, through [film’s director] Robert’s lens, feels funny, it doesn’t feel like, “Ooh, look at her body” or anything like that.”

The dog who played Bruiser was a ‘diva’

A dog called Moonie played Bruiser, Elle’s pet – and apparently he was a diva who wouldn’t play with anyone who tried.

“That dog was a bit of a diva”, Karen said. “He didn’t really want to play with you. He was a professional dog. He was very motivated by his chicken snacks from his trainer every time he barked on cue, so whenever anyone tried to play with him, it was just, “Bitch I’m working, get away from me!”’

This is undoubtedly the best scene of the entire film, when Paulette is trying to impress the UPS guy and Elle teaches her the bend and snap, her signature dance move that’s pretty much guaranteed to get you any guy. 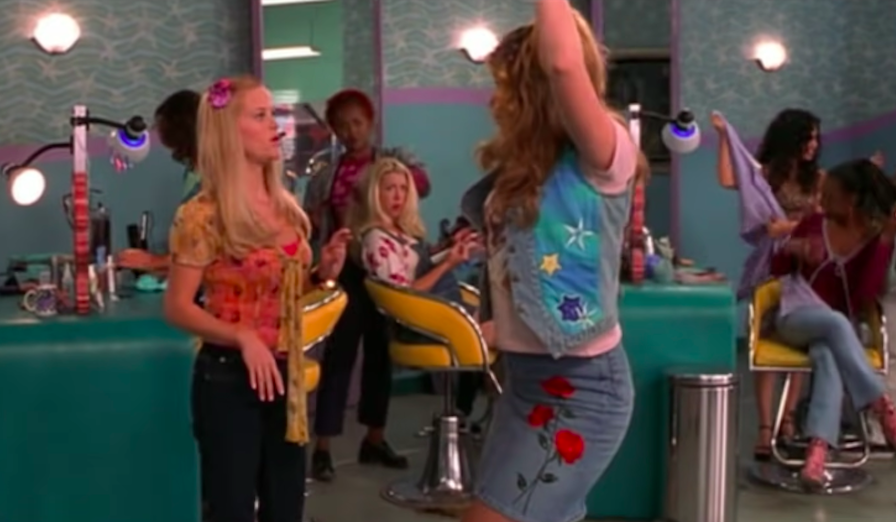 Apparently Karen and Kirsten knew they needed to come up with something, but it took them weeks to finally arrive on the bend and snap.

Kirsten said: “Karen and I had been banging our heads against the wall for two weeks, coming up with idea after idea… We were coming up with all kinds of crazy things and nothing was working.”

But then one night the two were at a bar, and came up with the idea of Paulette trying to get the UPS guy. Kirsten showed Karen the bend and snap, and the rest was history.

Speaking on the Graham Norton Show back in 2019, Reese revealed she had a clause put in her contract so she could keep Elle’s whole wardrobe after filming for Legally Blonde had finished.

She said: “I kept the whole wardrobe including 77 pairs of Jimmy Choo shoes. I had it written in my contract!” Reese has also said she rarely wears the clothes, and keeps them safe at home.

The film was originally ‘under the radar’

Karen said Legally Blonde has aged well, which she believes is largely because of how great Elle is as a character, but when it was being made they didn’t realise what it would become.

She said she thought other people would like Legally Blonde while they were filming it, but said: “It was very under the radar when we filmed it, it was just a fun little comedy and then it became this big thing, and it was just a very happy surprise.”

It wasn’t always going to be set at Harvard

So the main plot of Legally Blonde revolves around Elle getting in to Harvard Law School, in a bid to try and get back with her ex, Warner, who is a student there. But Harvard reportedly wasn’t the first-choice college for the film to be set at.

Legally Blonde was originally a book by Amanda Brown, based on her experiences at Stanford Law School. Apparently when Legally Blonde production approached Stanford, it didn’t want its image tarnished by the film. They then asked the University of Chicago, who also reportedly declined for this reason.

Then Harvard reportedly let the film’s production use its name, but wouldn’t let its campus be used in filming – instead, UCLA, USC, and Pasadena’s Rose City High School were used.

Reese reportedly spent a lot of time with girls from a sorority at the University of Southern California, getting a proper insight into their friendships, what they did and how they acted around campus. She apparently went shopping with them in Beverly Hills and took them out for food, so she could properly get into the right mindset for playing Elle.

It had a completely different original ending

The end scene of Legally Blonde sees Elle as valedictorian of her graduating class, giving that famous “we did it!” speech.

But apparently, the original ending took place on the courthouse steps after Elle wins her case, showing Emmett kissing Elle. But audiences were invested in Elle and wanted to see what happened after her case, including what happened with Warner – they wanted proper closure for Elle.

legally blonde has excellent pacing, comedic timing, romance, iconic quotes, well rounded characters, subverts misogynistic tropes and is a perfect example of overcoming adversity. one of the best films ever made ! pic.twitter.com/NWLilrN9kF

There have also been recent reports that Legally Blonde was originally meant to end with Elle and Vivian on holiday in Hawaii, drinking and holding hands. People called this a “chaotically bisexual” ending – but the reports were wrong.

They were shut down by screenwriter Karen, who tweeted her reply to someone talking about the supposed ending, saying “this is not true”. When they replied with an article explaining the apparent ending, she said: “I wrote the movie. I’m in the picture you just posted. The actress quoted was incorrect.”

• Quiz: How well do you remember the lyrics to all these iconic primary school disco songs?