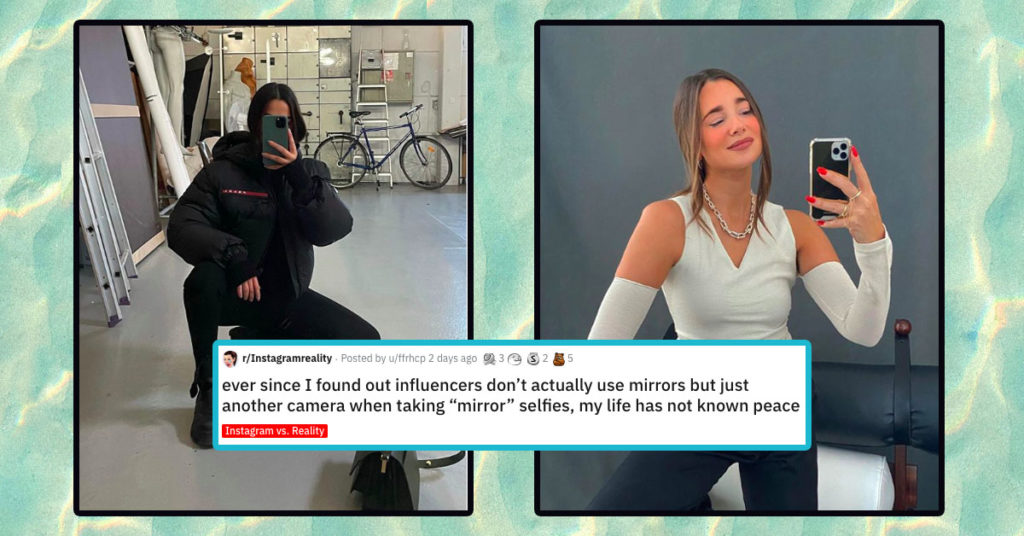 Ever wonder why your mirror selfies don’t look like influencers’ mirror selfies? Well it turns out that they’re not actually using mirrors at all. In fact it’s another camera being used to take the perfect shot. Yes I know, I feel lied to too.

A thread on Reddit exposed the secret influencer habit of taking mirror selfies. The thread called “Instagramreality” shared that many influencers have someone else taking the picture but still making it appear like a mirror.

They said: “Ever since I found out influencers don’t actually use mirrors but just another camera when taking ‘mirror’ selfies, my life has not known peace.”

And it’s not just on Reddit everyone is talking about it, it’s gone viral on TikTok too. TikTok user @katathomedoingnothing created a video explaining that most mirror pictures will have imperfections such as blemishes, light glares and dust.

She suggested that influencers just have another camera set up to take the mirror selfies. Which makes me feel so much better about my awful mirror selfies.

Many people on Reddit and Twitter have been sharing their shock at this new information and questioning how we didn’t all see it before.

Culturally……. we are in a very toxic spot with social media. If you’re wondering why your mirror selfies don’t look like some influencers…. here’s why. The internet is a ✨facade✨ https://t.co/ORBl9ZJKPO

People have called it “unhinged” and that it is “going to haunt” them for life. However it’s also made everyone’s self esteem go way up now that we know influencers aren’t great at taking mirror selfies.

The mirror being perfectly clean and the phone covering their face exactly should have been enough for us all to know they weren’t actually taking the pictures themselves. No one’s mirror is *that* clean.

•The rise and fall of influencers: Is the age of giveaways and #ad posts coming to an end?

•Quiz: What type of influencer would you be?