Boycott Boohoo has been trending on Twitter. You’ve probably seen people on Instagram posting tiles to their story calling for people to stop buying from the fast fashion company. But why?

Over the weekend, an undercover reporter from the Sunday Times exposed working conditions in factories making clothes for Boohoo, claiming workers were paid as little as £3.50 an hour and wearing little in the way of protective equipment.

The company and its suppliers have been linked to a localised outbreak of COVID-19 in Leicester, as the city’s garment industry comes under scrutiny.

Here’s what we know:

Calls to boycott Boohoo are growing after claims workers making their clothes are being paid just £3.50 an hour

Boohoo suppliers in Leicester have been accused of paying workers just £3.50 an hour – less than half the minimum wage of £8.72 an hour. 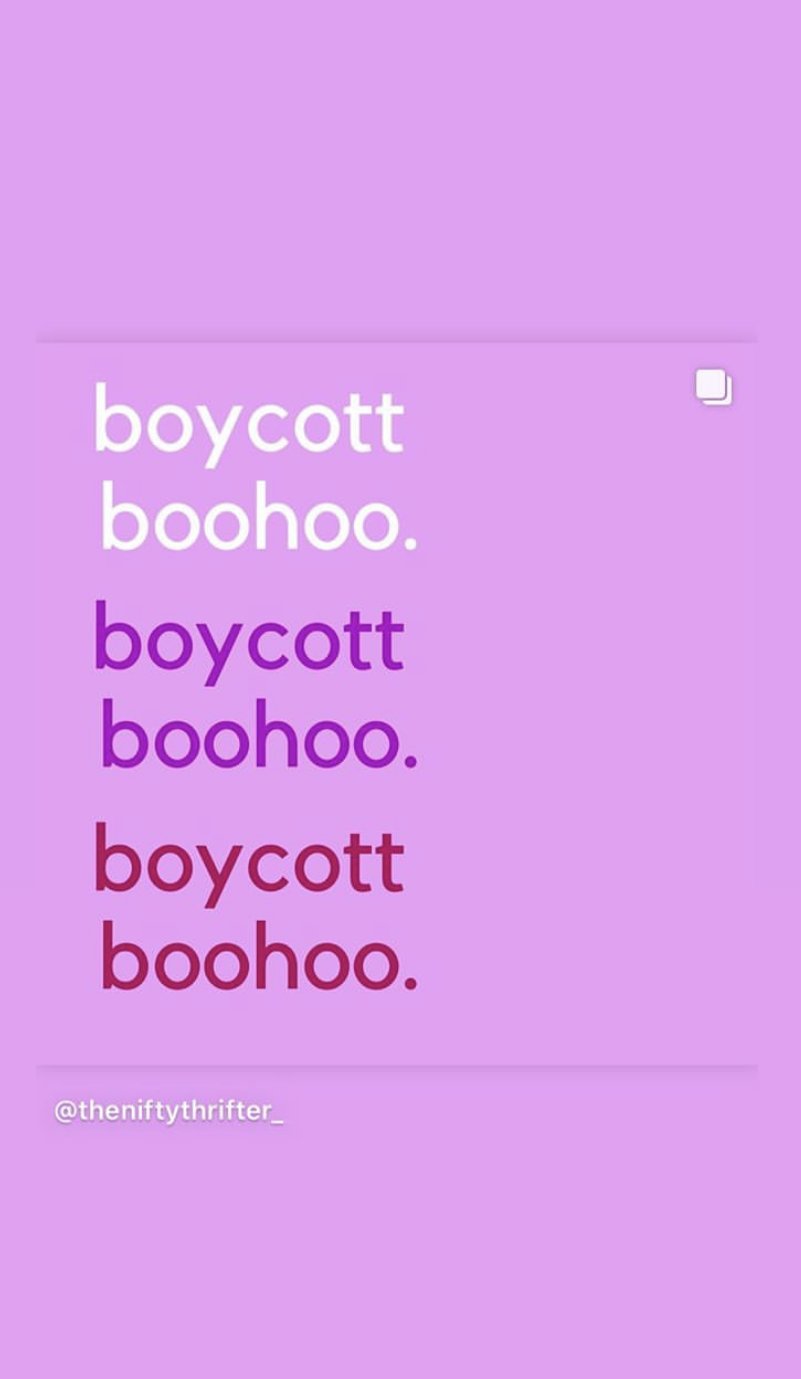 A Sunday Times report detailed workers at a factory making clothes for Boohoo and Nasty Gal wearing barely any PPE and telling an undercover reporter: “These motherfuckers know how to exploit people like us. They make profits like hell and pay us in peanuts.”

Boohoo, which also owns PrettyLittleThing, Nasty Gal, and MissPap, saw £1bn wiped off its value as shares fell by 23 per cent.

Profits surged for the company in the first half of 2020, as lockdown saw fast fashion prosper.

Boohoo is investigating the claims. The Guardian says the company named in the Sunday Times report hasn’t traded at the factory for two years, and that Boohoo believe a different company is using the premises “We are currently trying to establish the identity of this company,” Boohoo said in a statement.

Nasty Gal told the Sunday Times: “Nasty Gal does not allow any of its suppliers to pay less than the minimum wage and has a zero-tolerance approach to incidences of modern slavery.

“We have terminated relationships with suppliers where evidence of non-compliance with our strict code of conduct is found.”

Before this weekend’s revelations, the company had been accused of spreading coronavirus after its suppliers allegedly made factory staff with the virus keep working.

Former employees allege factories kept operating through lockdown with barely any social distancing, and that employees were scared they wouldn’t be paid if they didn’t come into work.

60 to 70 per cent of Boohoo’s clothes are made in Leicester, where the city’s garment industry has been under scrutiny after being linked to a coronavirus spike which put the city in an extended local lockdown.

The company said it had “closely followed and adhered to all aspects of guidance”, and was investigating the claims.

Experts say suppliers should – if practices were ethical – be charging companies like Boohoo more to manufacture certain items of clothing than they’re actually sold for in some cases.

In 2018, the FT took a pair of Boohoo dresses, retailing at £6 and £7 and made in Leicester factories, to a man who operates a “compliant” clothing factory. Mick Cheema, who runs Basic Premier, said suppliers usually get paid around third of the retail price for an item of clothing. However, Cheema estimated that the cost of manufacturing the dresses in his factory would be £6.45 and £5.65 respectively – a cost which a retailer could not pay and then make a profit on the item.

Boohoo explained the discrepancy by saying it may take a loss on some items, and that the dresses did “not reflect the norm for our business”.

Health secretary Matt Hancock said: “There are some quite significant concerns about some of the employment practices in some of the clothing factories in Leicester.”

Stories related to boycott Boohoo, recommended by this writer:

• Fast fashion is worse for the environment than driving, according to research