An Instagram account has been set up which exposes the pay gap experienced by black and white influencers. The account, @influencerpaygap, takes DMs from influencers all around the world to find out how much they are paid for posts and has found multiple instances where black influencers are paid less for similar deals.

The page was set up last week, and in its bio says “more transparency, more accountability”. In a post the creators of the account said: “Over the past couple of weeks we have witnessed a lot of discussion surrounding the ways in which black influencers have been treated by agencies and brands. Now more than ever it is important to take a solid stance against the disparities in opportunities, pay and visibility between black and non-black influencers.

The page’s creator, Adesuwa Ajayi, told The Tab: “One of the reasons why I set this up is because I realised that not every influencer has the privilege of being surrounded by fellow influencers across varying demographics who are willing to speak so openly about rates. It’s so important that transparency is accessible to all. I’ve noticed that many generally approach negotiations with a lot more confidence when they have insight into what others are being paid within the same niche.

“I love how now, black influencers are able to see what others are making and are able to ask for more.” 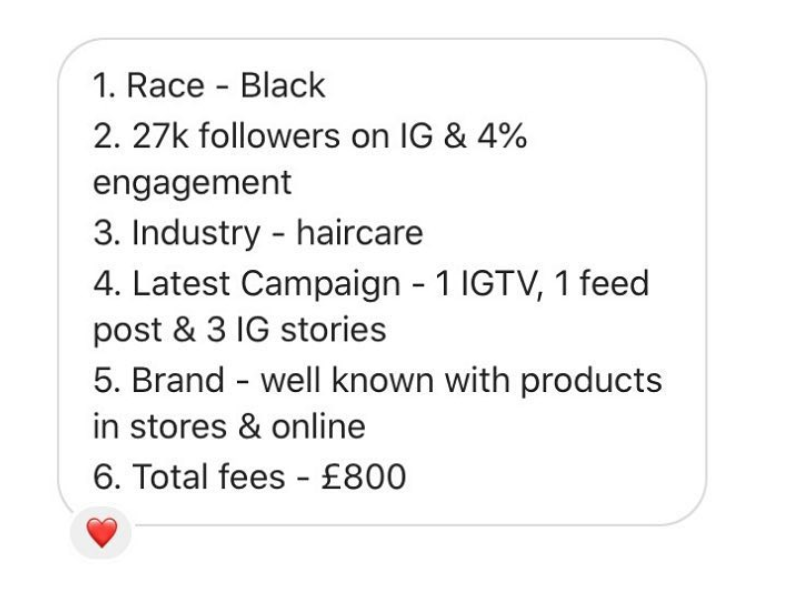 Since it was started, the Instagram account has posted over 150 times and has 19k followers. People have been sharing their accounts of working with all types of brands, on all kinds of different deals and how much they got paid. The page has found many instances where black influencers had to do a lot more work to get even close to the same amount of pay as a white influencer. 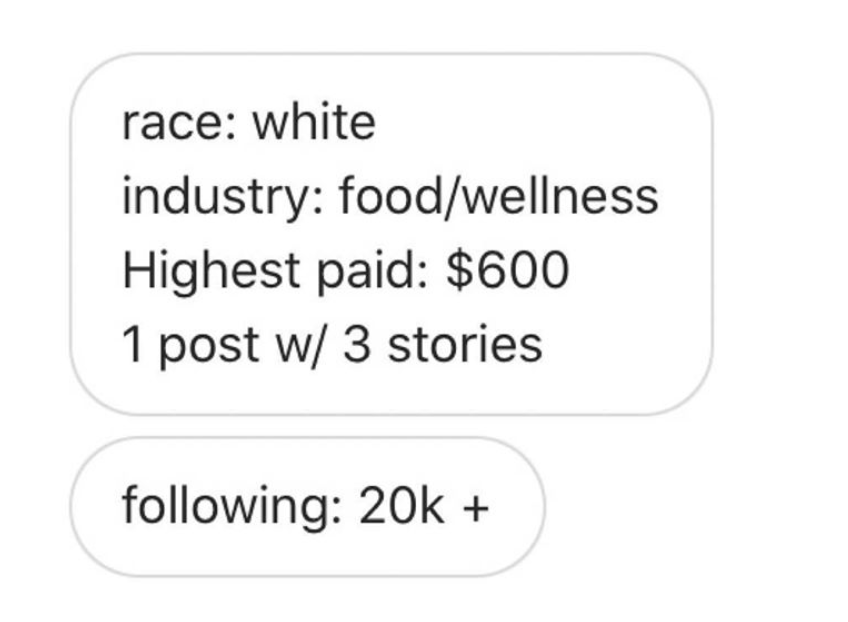 It can be difficult to work out from the some of the posts whether or not influencers are getting paid well for their time, and there are clear discrepancies in some of the findings. Many influencers have varying followers counts, engagement rates, types of deals and it depends highly on the size of brands they are working with. However it is clear that there is no consistency across the board, and there are many influencers who are being sold short. 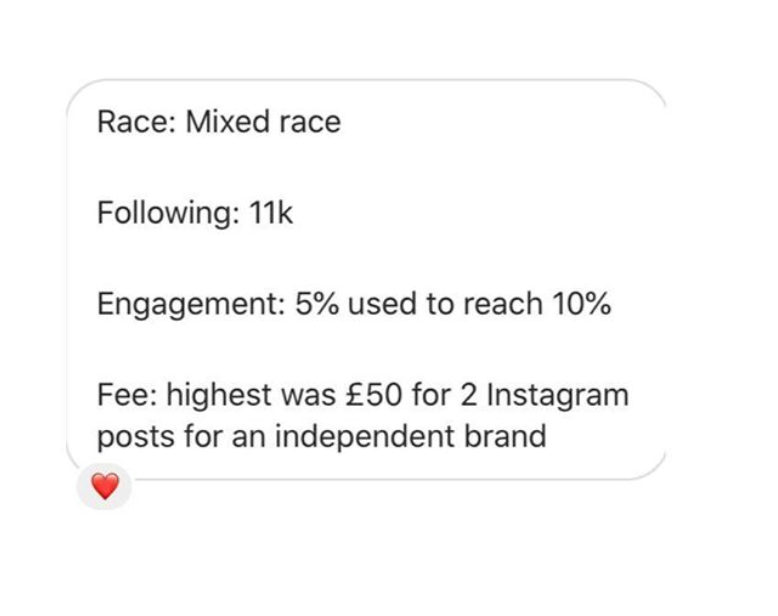 As well as anonymous submissions from influencers, the account has shared what appears to be insight from industry experts about the pay gap. One person said they represent influencers of all races and “without a doubt” have received “insulting” offers for some of the people they work with. 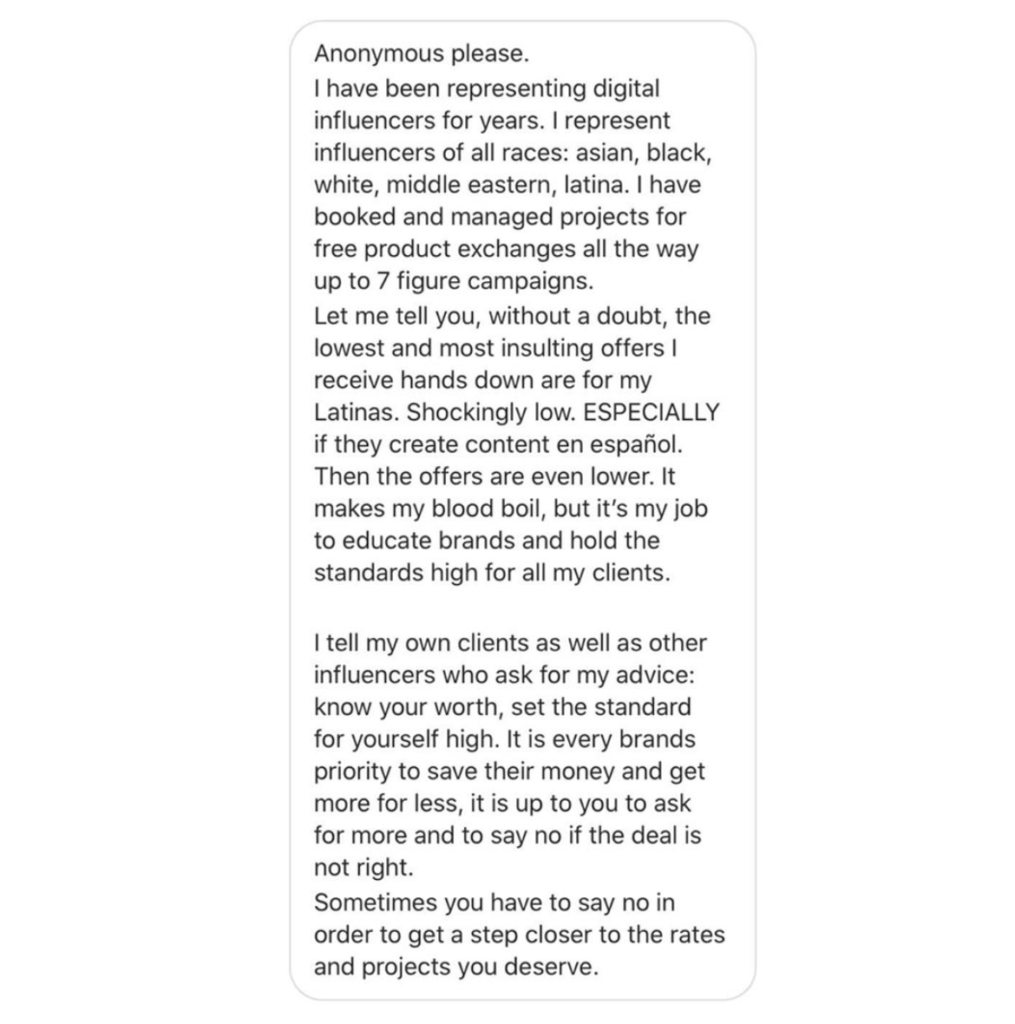 The account has received lots of praise on Twitter for exposing the influencer pay gap experienced by black creators across the world. People are sharing how shocked they are at some of the posts.

My eyes have been twitching all day since I read this. OMGGGGGGG. Na black people need more transparency with regards to this influencer stuff because we can’t be getting bumped.

This ‘influencerpaygap’ page is upsetting me and my homegirls

I’m reading through it right now (@/influencerpaygap) it’s so messed up we, especially black or minority creators, have to demand more or just simply don’t do accept it. It’s hard because i know the market is limited but I’m really starting realize how valuable i truly am. https://t.co/KefK4zVGhQ

The influencerpaygap page on Instagram is so insightful. I’ve been paid more as a creative for a simple IG post.

• To recognise BLM, you have to recognise how you appropriate black culture every day

Featured image (before edits) via Unsplash.