Honestly why do so many of you pass out on toilets and planes?

There’s something magic about uni nights out. Not the good kind of magic – more like when Ron tries to make Malfoy eat slugs and ends up with a mouthful himself. Whatever happens, and however hard you try, a disaster is always around the corner.

Students from around the country have confessed their wildest stories and they are grim. Featuring more than one accidental trip abroad, multiple medical emergencies, and a fire, here they are.

And, honestly, why do so many people pass out on toilets and planes?

“We woke up on a plane to Oslo” – Cambridge

“Picture the scene…two absolutely smashed idiots walking back to college after Wednesday Cindies, when one of us has the bright idea to order an Uber to Luton Airport (we don’t talk about the cost). The lovely lady at the ticket desk did not think to question why we were holding a bottle of vodka and nothing else and proceeded to sell us two tickets to Norway (which we soon discovered is FREEZING in October and horrifically expensive). Waking up on a plane with no memory, having to ask the flight attendant where you’re going, all while knowing you’re meant to be in a compulsory lab is truly…an experience.” 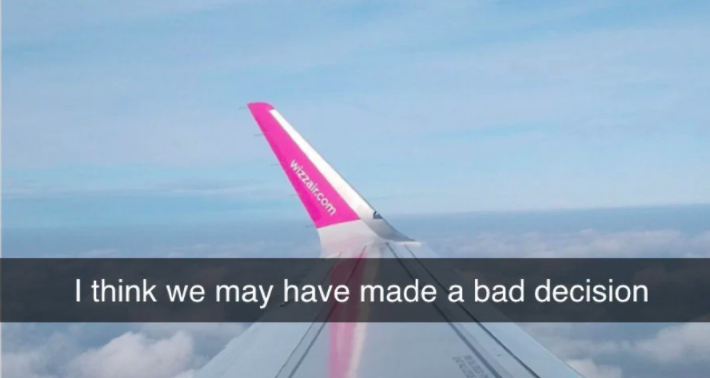 “I got an Uber to Scotland” – Newcastle

“I ended up in Scotland after going home with someone on a night out in Soho, I only realised when I checked snap maps to see I wasn’t in Liberty Plaza, I was in a different country. Safe to say I will never financially recover from that Uber.”

“The bouncer told us he’d seen us switch clothes” – Sussex

“My mate got turned away from Mash Tun so thought we’d be slick and switch jackets and put our hair up or down. VERY embarrassing when we got to the front of the queue in our new disguises just for the bouncer to tell us that he’d seen us switch clothes.”

For most, fainting in a club after a bad reaction to some MD would be the nadir of any night. Not so for this Leeds student, whose night took a turn even after that: “I woke up wrapped in a blanket in the medical tent next to a guy rocking back and forth saying that his name was Holland and Barrett.” 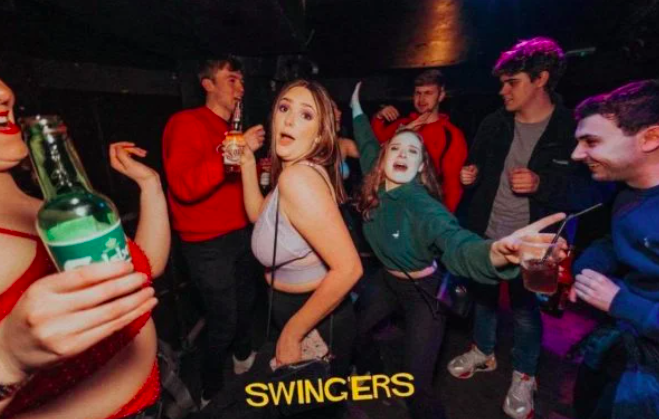 “Barclays had to step in to stop my Jägerbomb spree” – Cambridge

“I attempted to purchase 20 Jägerbombs for myself, and my card was subsequently frozen by my bank for suspicious activity. It’s happened twice now. I should really start leaving my card at home.”

“I ended up going home after a night out with someone to be woken up on their family bathroom floor by the lad’s mother. She asked me who I was and why I was in her house, however I had no idea either. At least the guy gave me a ride home, but only because he lived in the middle of nowhere.”

“I got my foot stuck between the Metro and the platform en route to a night out, then I cleverly decided to use WKD to disinfect it because WKD is a common disinfectant, right?”

If you think you can guess the end to this story, you’re right: “It resulted in a worse infection and weeks on antibiotics.”

“I found my friend helping the bouncers ID people” – Sussex

After a group of Sussex students lost their friend on a big night out, it was anyone’s guess where she’d turn up. Luckily, they “found her a while later outside helping the bouncers ID people who were coming in.”

“I fell asleep in the loos of a nightclub” – Newcastle

This is a classic. A rite of passage. Except you usually wake up before closing time. “I fell asleep in Hobo toilets and woke up to them banging on the door as they’d shut and ended up being kicked out. Mortifying.” 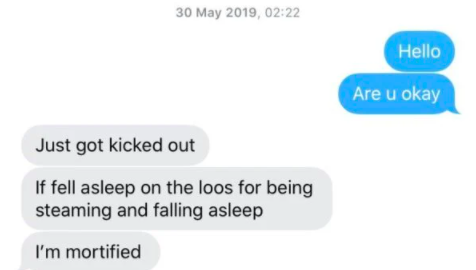 “After a night out in Pryzm I blacked out and ended up inside Cheeky Chicken. I slipped over in the disabled toilets and smashed my phone on the front and back. I bruised the entirety of my right thigh and tried to sleep on the concrete floor outside.

“My friend, who wasn’t even at Pryzm had to come and collect me because I called her 100 times.” No word on if that figure’s an exaggeration, but it’s impressively with a newly-obliterated phone.

Although that sentence sounds like it’s not real, it is. During an attempt at Leeds’ legendary Otley Run pub crawl, one student came a cropper. “It was my second week of first year and I was on an Otley Run wearing a toga made from a bed sheet. I didn’t realise it was going to be so lethal! I thought it would be a good idea to parkour along the benches near Parkinson’s. I ended up falling off the end of one, landing straight on my ankle.”

It gets worse: “My friends were laughing at me but got worried when I told them I’d heard my bone snap. A nice guy carried me back to Charles Morris and it was confirmed that I’d broken my ankle at the hospital the next day. What a cracking (literally) start to my first year.”

“My flatmate after a night out managed to set fire to a set of oven gloves on the hob after a night out. I woke up to the flat full of smoke and her dancing in the corridor as if it was a smoke machine in Cosmic.” You’d probably move out wouldn’t you.

“My flatmate almost died to ‘Not Nineteen Forever’. It was like two weeks into first term of first year and we were headed to Fruity early to get paper tickets. When we got there my flatmate Jess (who has just turned 19) wanted to dance in Terrace. Within five mins of dancing she felt so sick, so ran to the toilets. She fell down the stairs on the way and then passed out in the toilets. I had to call the paramedics and after about four hours of her coming in and out of consciousness, she had three rounds of CPR. All this, to the tune of the Courteeners ‘Not Nineteen Forever’ playing in Stylus.

“We eventually had to go to the hospital overnight and I slept on a plastic hospital chair. When we wandered back through campus in the morning, it was an open day. We got some funny looks from judgy parents.”

• Ranked: The Russell Group unis handing out the most third class degrees