There’s officially 14 drunk lockdown personas, but which one are you?

Is it legal to be a mixture of all of them?

Everyone’s relationship with booze has changed. You’re either unconsciously adding a bottle of rose to the basket a few more times per week than normal, or you’ve decided to become a temple and barely touch the stuff. And you know what – it’s fine whatever category you fall into, there’s no judgment here!! But with this new drinking environment, the usual key players found on a night out, the pub or at pre-drinks have had to adapt, develop and evolve into newer selves – into lockdown versions.

Your usual hot mess smashing her phone on the club stairs and crying into her Uber app has been replaced by the horny swiper, aggressively trying to find a quarantine boyfriend whilst polishing off a bottle of red. The guy who goes to the house night until 6am off his chops can’t do that anymore. Instead, he’s doing it from his bedroom, and live streaming it on his finsta. And your mum? Well actually, she’s still posting embarrassing Facebook statuses, rambling about you and your siblings and how emotional the passage of time is or some shit. So no changes there.

There’s officially 14 drunk lockdown personas, but which one are you?

The guy who gets into whiskey

Not that there’s anything wrong with this at all, but these men have really small dicks. Like reaaaaaaaaly small. It’s a well known fact whiskey is the right up there with football and chopping down trees on the list of things manly men should be into if they want to lay claim to traditional masculinity. Over Zoom you’ll watch them swill the tumbler like they’re Michael fucking Jordan in that new documentary and try not to wince as it burns their widdle tounges. 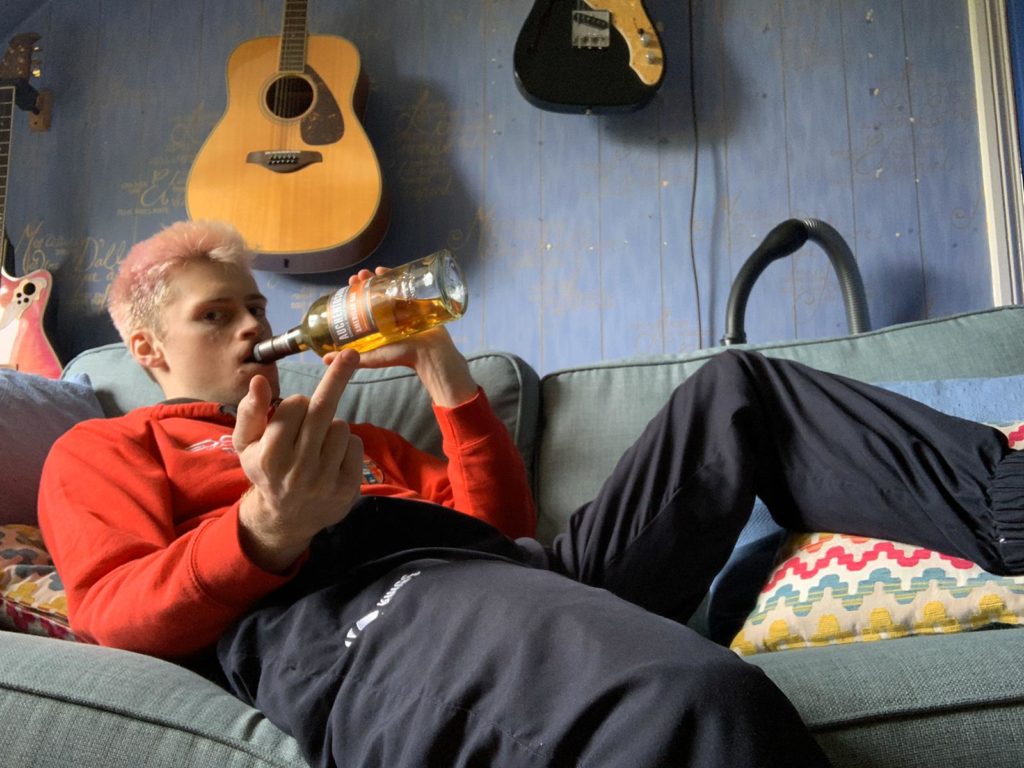 The one who texts all their exes

Look. Things are hard. For everyone. It’s been…I don’t even know how many weeks, and you’re so horny you’re about to call NHS 111 because it’s becoming a medical emergency. But Jessica, that doesn’t mean that after two glasses of white wine you should start messaging all your past exes. Jason hasn’t spoken to since you broke up in Year 11 after you caught him kissing Hannah at Rachel Wilson’s birthday party. He actually doesn’t remember your second name – it’s been that long. Okay the “just checking in to see how you are getting on!” might land you a dick pic from your fresher’s fling – but is that what you really want Jessica????

This person has decided that the only skill they’re interested in mastering during lockdown is how to make a banging espresso martini. Instead of buying paints, gym equipment or dusting off the guitar that’s been slowly eroding in the attic, they went on Amazon and bought a cocktail shaker, martini glasses, and frothers. And on top of that, they’ve spent probably over £100 on spirits that you wouldn’t normally go near, like triple sec and Kahlúa. Come Thursday – they call it “Thirsty Thursday” – their Instagram is full of portrait mode pics of their creations, like they’re on shift at Be At One or something. 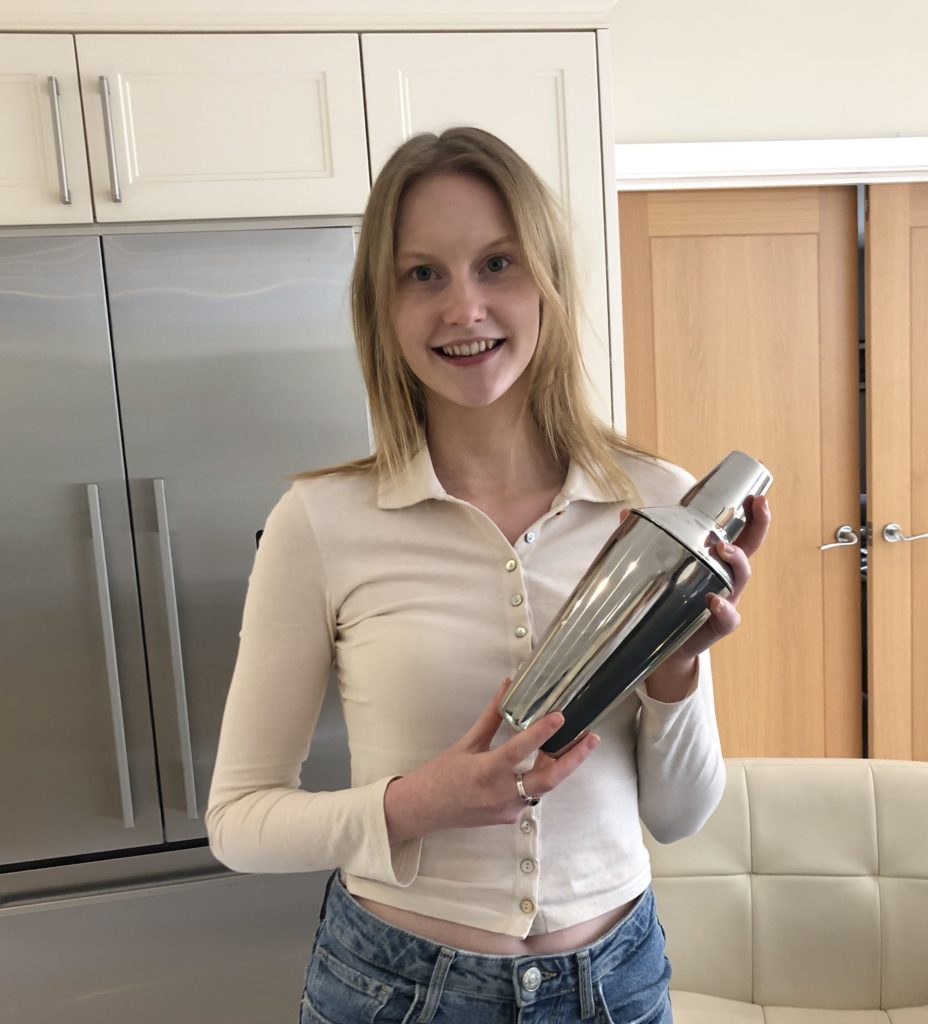 The soft bois of this good nation are single handedly keeping the independent brewers open. The thought of them not being able to get a pint of ‘the good stuff’ (insert pretentious art wanker name of some IPA here) troubled them more than being able to see the mum again before autumn. So they got on their road bikes, little cap, rolled up socks and skate shoes on, and now cycle once a week to pick up their big batch of beers. Naturally as soon as they get home, they post about it to their incredible aesthetic Instagram. 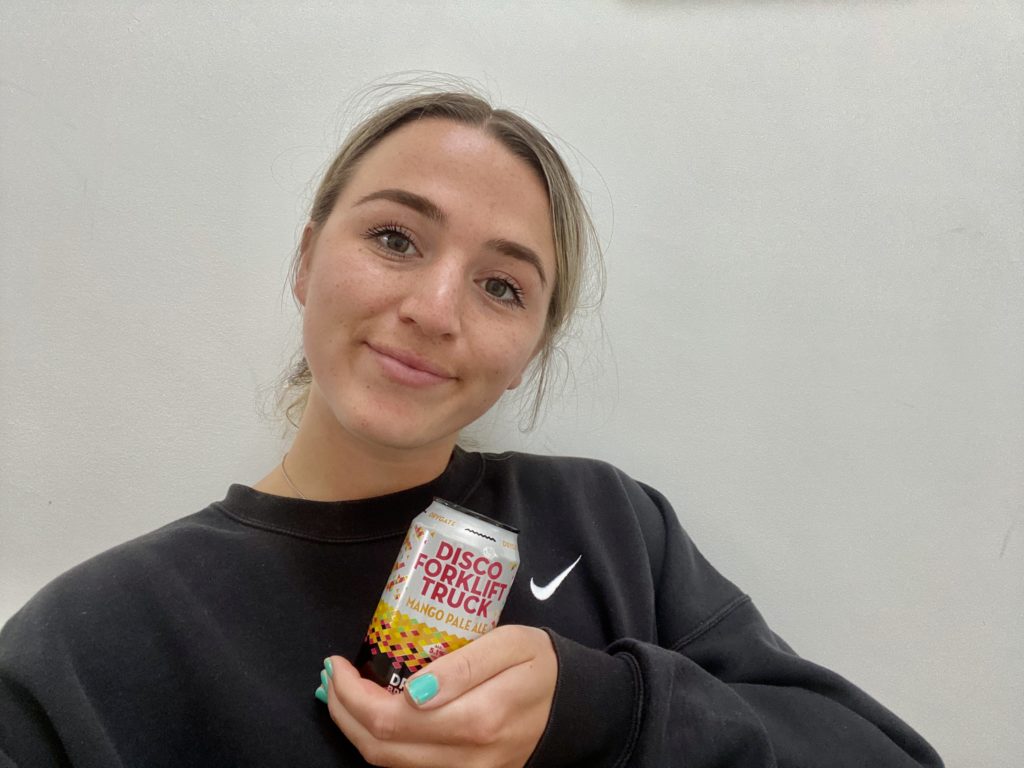 A distant relative of the one who texts their ex, except you don’t have any exes because you’re too afraid of commitment, so instead you fire off nudes to every one of your past Tinder matches like your camera roll is hooked up to a gatling gun. Once you’ve received a dozen replies from people telling you they’re seeing someone now (wtf you’re in lockdown how are you seeing anyone???) you’ll resort to Tinder and frantically right-swiping every single profile you see. Catfish? Don’t care. Married with kids? Come one, come all. Once Tinder boots you off the app for swiping too many people you’ll open another bottle and crack on with Hinge instead. Or maybe you’ll open Grindr to find that *shock* no one new has appeared in your area because they’re law-abiding non-horny citizens. 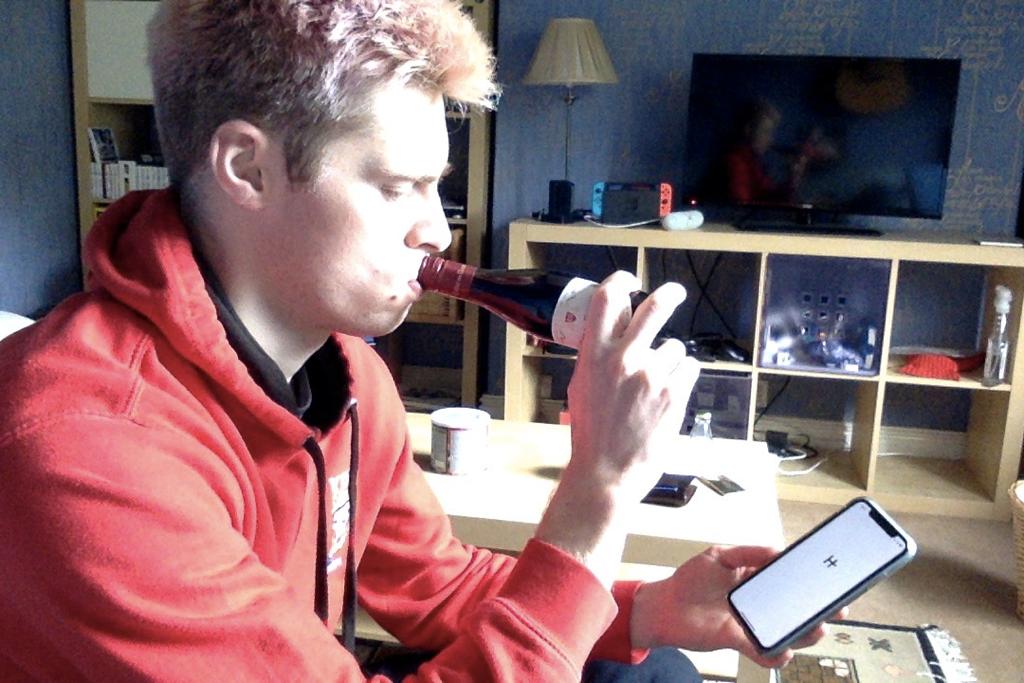 There are few constants in life: Day will always follow night, summer will follow spring, and your mum will always be very very in love with wine. It doesn’t matter that you’re now spreading yourself all over her abode with the lingering stench of your disappointment (as well as your actual bodily odour) your mum has her support system: her fave sauvignon, a series of ladies WhatsApp chats and her Facebook profile, on which she’ll happily post a picture of you with your dissertation print-out. Your mum is a commendable drinker: wine in the bath, gin before dinner, wine during dinner, and wine after dinner. There is a wine for every Zoom call with the girl squad, every walk around the garden, and no one can rock a glass of el vino quite like your mum in a dressing gown.

The boring motherfuckers who don’t drink during the week

Look there are many acceptable reasons for not drinking during certain periods of your life, and even more valid reasons for not drinking at all. But is there a person on this planet more loathsome than the dickweed who lords it over you all because they have the self restraint to have water instead of wine with their Wednesday evening meal. Seriously mate fuck off x 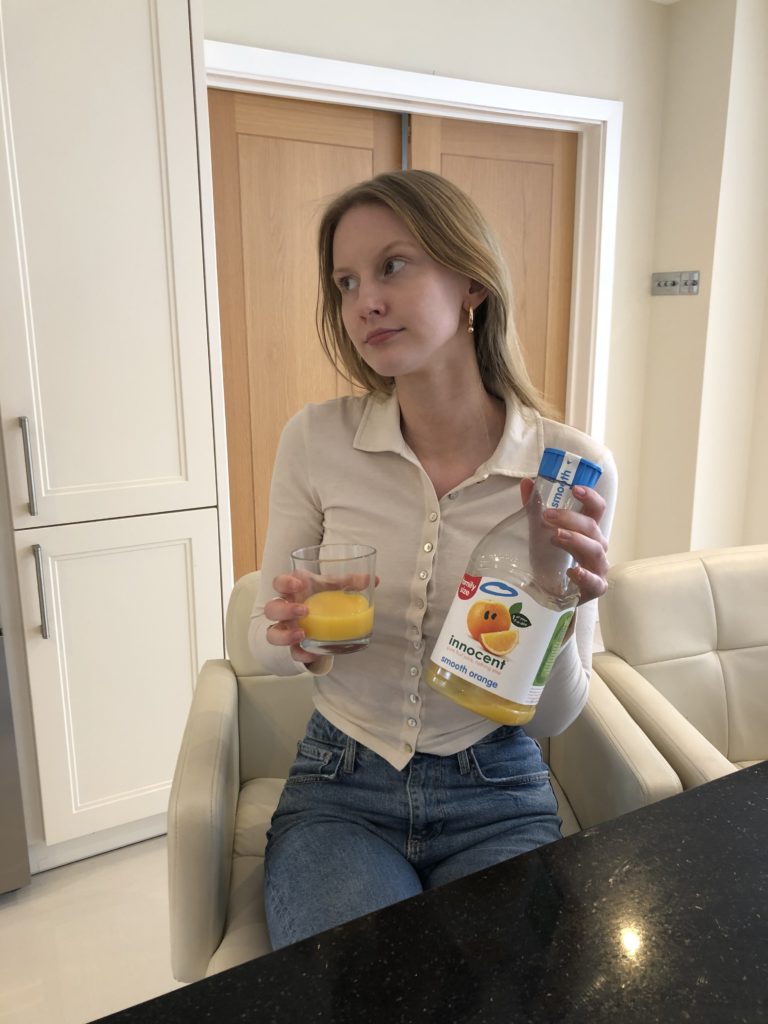 The one who invites a Hinge date over for sex

First of all, you fucking traitor. Second of all, I hope it was worth it, because I bet £20 of my own money, it wasn’t. This person has three glasses of red and boom – they break. And now they have to live with the guilt for the rest of their sad little life. If you thought about going out and clapping at 8pm on Thursday, or you thought about commenting on the VE Day conga line, you’re not allowed anymore. Lalalala I’m not listening to you anymore. Lalalalalalala.

Think of this person in scientific terms. Remember how Boris was prattling on about R? Well idk what that means but I’m told it’s a number or something – anyway, if R in this case is the rate at which normal Timmy consumes a beer while you’re catching up over Skype, the double-speed Zoom meetup boozer drinks at twice that rate. Why do they do this? Well these poor souls miss the atmosphere of a banging pre-drinks, or a late night pub sesh. You know, environments where it was acceptable to get really fucked and wake up the next day with the overpowering urge to vomit barely digested kebab all over your bathroom floor. They know that as soon as the meeting is abandoned the science will hit them like a tonne of bricks and the warm fuzzy feeling will go away, so they take the time they can to smash as much booze as they can while you’re all together. When lockdown is officially ended they will weep with joy.

Tinnies in the park

Better not let Boris find out you’re flouting his rules to drink cans in the delightful sunshine. If he doesn’t come for you then Twitter will. No it doesn’t matter that you’re six feet away from each other that’s not what social distancing means, Kyle. 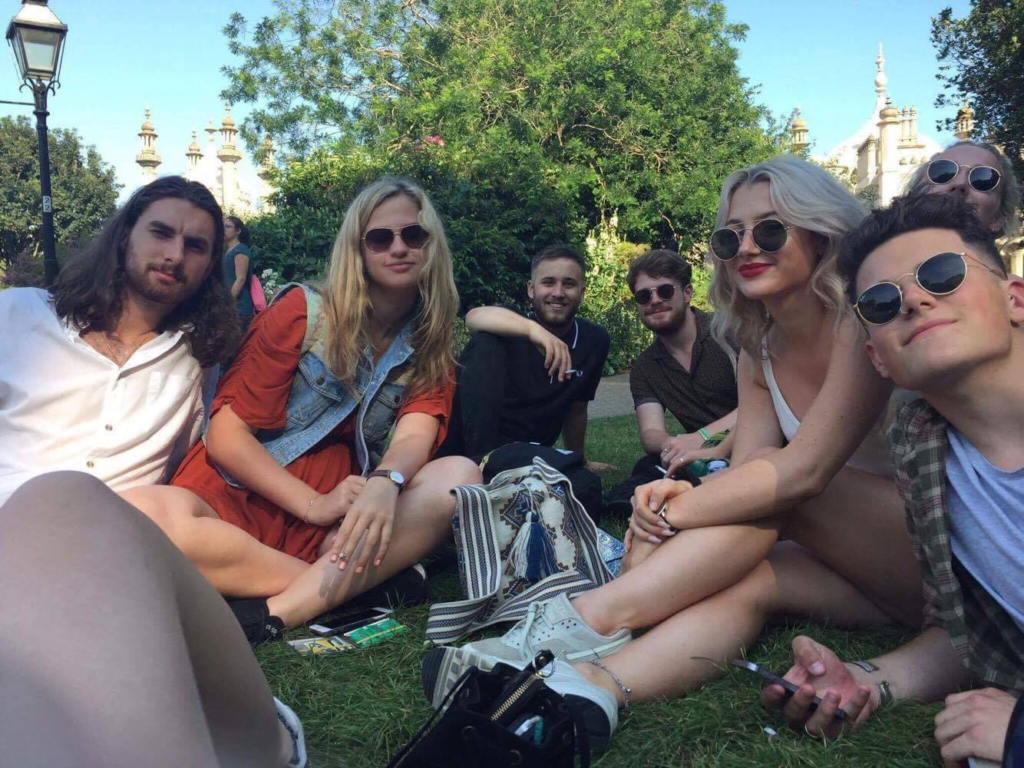 You know what – on paper, this sounds horrendous and cringe and something you’d usually slag off to your mates in a WhatsApp chat, but actually when you’re sat at home with your parents watching a Dad’s Army repeat and your mum telling you to clean up your plates and your younger sibling noisily playing on their Switch all night long, and any sense of independence you used to enjoy seemingly gone and those drunken uni night’s a long distant memory – you will look at these 17 story tiles on Instagram and realise these people are really nailing lockdown, and frankly living the dream. There’s a different DJ in each room, they’ve got disco lights on, there’s beer pong and someone even looks like they’re playing dealer in the corner. Everyone’s gone full out outfit wise – there’s rainbow unitards, glitter, crop tops – I think someone’s even faked tanned??? The last story upload was only four hours ago, which is depressing considering you went to bed at 10pm because you had nothing better to do. 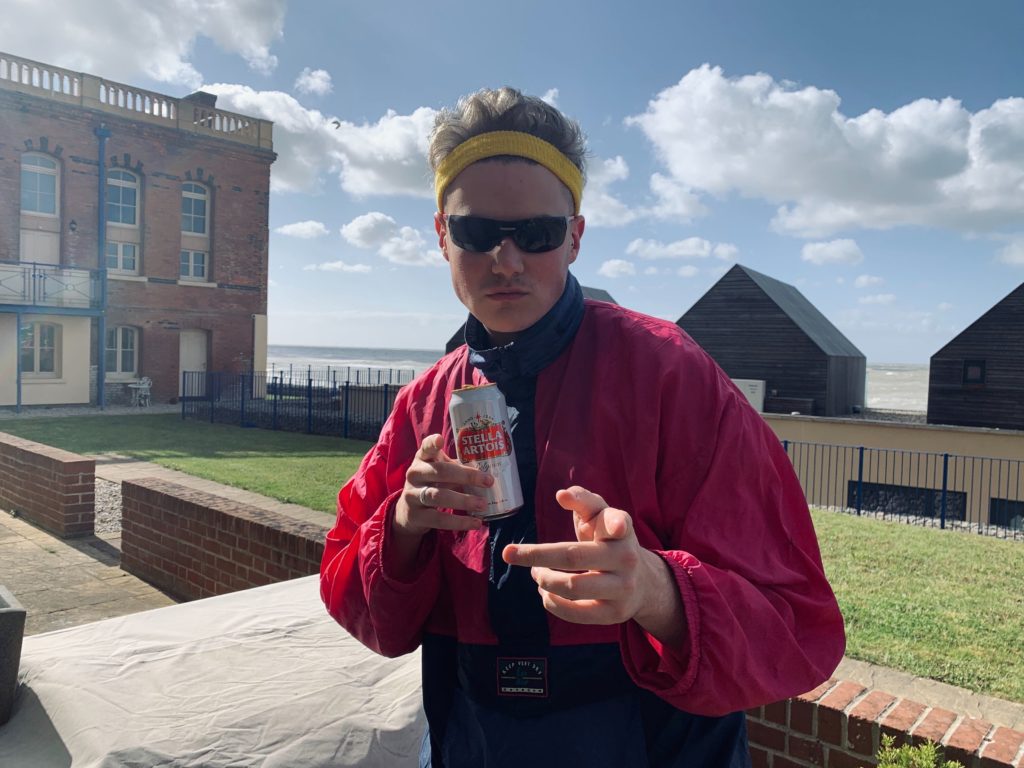 You didn’t really get why your parents would get home from work and crack open a bottle after dinner every night, but now you’re stuck in a house with them for the foreseeable you kind of do. It’s not like you’re getting outrageously fucked off yout tits every night, it’s just that you need that sweet nectar after a day of flying consistently at half mast. It’s like your poor bored brain is getting cuddled. 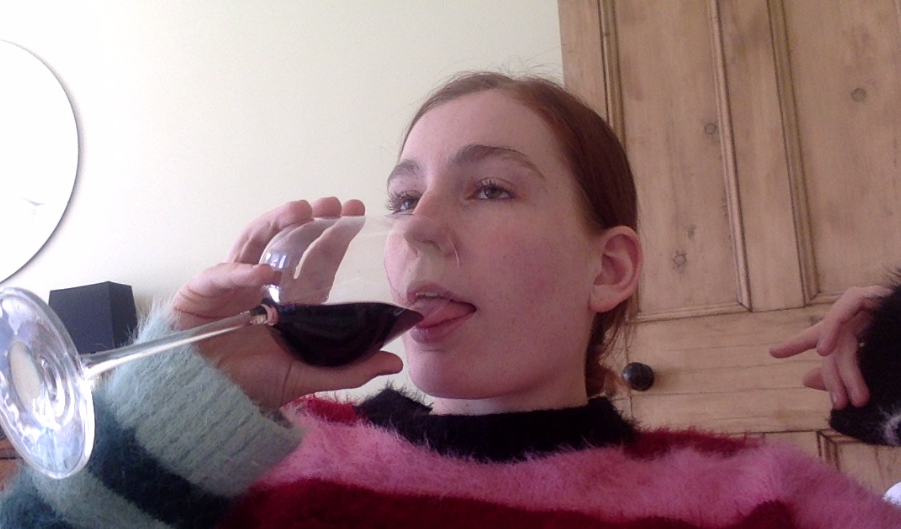 Poor, poor neighbours. This person got a karaoke machine before they even considered buying loo roll or flour. And unlike the ravers who are having a big bash every weekend, this person is treating their road to Celion Dion and Whitney every night. It usually doesn’t take much either, a couple of Dark Fruits and before you know it, Sweet Caroline is being fired up.

The one who went past alcohol and onto the doobies

The one big drawback to getting ludicrously high on a weeknight is that your employers will smell it on you the next day, but in your morning Google Hangout meeting your boss can’t possibly tell you REEK of the acrid smell of the ganj. It’s not like getting baked in your house is scumbagenous or anything like that, you think of it more like Dutch living – you’re not tragic, you’re cultured AND you’re supporting the local dealer economy.

• Which of the 10 lockdown personas are you? Take this quiz and find out