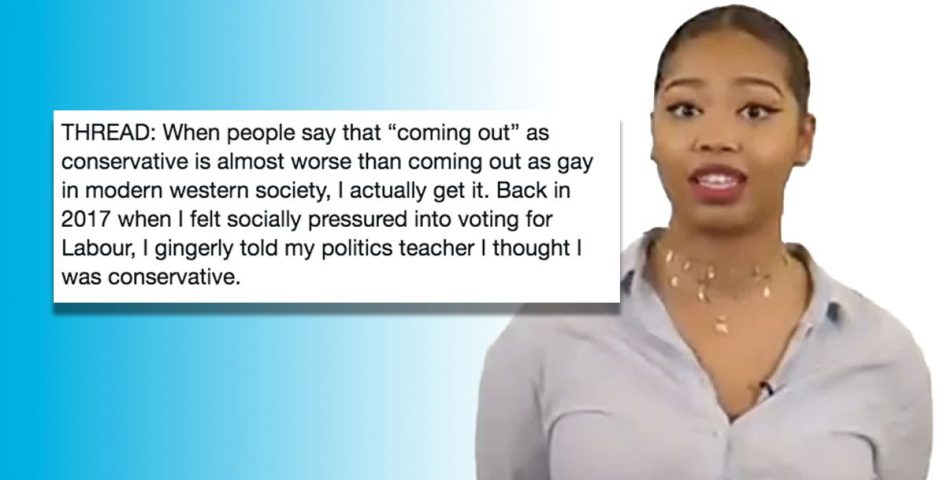 It's a take that seems to never die, and frankly it takes a lot of strength not to write these articles with your forehead, but here we go.

Dominique Samuels, of Turning Point UK fame, writes that when "coming out" as conservative she was "embarrassed, almost ashamed, because of the social ostracism that comes with it".

She was conflicted over being "socially pressured into voting for Labour", and had to "gingerly told my politics teacher I thought I was conservative".

(My politics teacher wasn’t surprised by the way ?), but she wasn’t the type to force her views down anybody’s throat and tried her hardest to be impartial. Shout out to Mrs Hall!

So for those that like to screenshot things and make out like I’m disingenuous, I was genuinely ashamed of my political inclinations. That’s how ingrained leftism has become in our education system.

Look, it would shock nobody if this was done to get a reaction. And, yes, it's kind of playing into her hands to sit here and rinse it.

being tory is a choice & it’s a bad one. you should feel bad x

Imagine having to sit your parents down and tell them that you’re attracted to right wing politics. Must be so hard for you dominique, sending thoughts and prayers https://t.co/xYPsrLHFfh

Yes, I know it's absolutely shocking that people have taken this badly.

Nope, this isn't it. I was outed publicly when I was 15, in the middle of the school playground at lunchtime. 200 kids stopped, stared, pointed, laughed and pelted me with food. I was an outcast, a joke, a pervert, a monster. You have no idea.

Right wing millennials: “My generation are snowflakes! Always whining about oppression! I’m not like that!”

Right wing millennials: “I, a voter for the largest party and party of government, am oppressed. Thread 1/?” https://t.co/YNgD4Av4c8

tories: i’m so sick of the self-victimising attitudes of the left

also tories: i’m basically as oppressed as The Gays

Aside from the torrent of people pointing out the ridiculousness of it all, it's got people in the replies agreeing.

"I am scared that my employer finds out that I'm conservatives. That's how bad things really are," says one.

"If you substitute the word Tory with gay/black/trans, the abuse that is heaped on us is eerily similar to the bad old days of discrimination, bigotry & intolerance #tolerance #manners," writes another.

This isn't the first time this view has been out there. A couple of years ago a Kent Tory said the same thing, and last week a bunch of conservatives were moaning nobody wanted to share a flat with them.

Here, you'd usually get paragraphs of statistics on the discrimination LGBT still suffer, and why that might make coming out as gay harder than getting rinsed for your political opinions.

Instead, I'm going to write two filler paragraphs where I say nothing except encourage you to think about why this is a silly comparison.

This is the second time I'll ask – please just let the tweets marinade in your mind. Consider what she's saying.

Dominique fired back to anyone pointing out that what she said might not have been it. She was keen to point out she means "small c conservative", and that people are wilfully misinterpreting – or too thick to get – what she's saying.

You’re choosing to misinterpret this & revert to extremes to misrepresent what I was saying. If you don’t understand what I meant then that’s your problem not mine. https://t.co/eQRwSGSmyy

Okay, I'll spoon-feed it. Even if you're sympathetic to the idea that right-leaning people are unfairly maligned and ostracised for their views, please don't go comparing it to actual discrimination. And highlighting the absurdity of the analogy isn't the same as making it difficult to be a conservative.

I love the internet. I love politics. I love our country.

• It’s actually really easy to be a Tory at uni: Just don’t be a twat