Influencer is being accused of staging motorcycle accident photoshoot for #Sponcon

Hey Siri, what stage of capitalism is this?

Tiffany Mitchell, who has over 200,000 followers on Instagram, shared a slideshow of photos of her motorbike accident.

The post includes photos of her before the accident, some of her lying on the road as she's being tended to and one where she's unconscious with a bottle of Smartwater placed next to her. 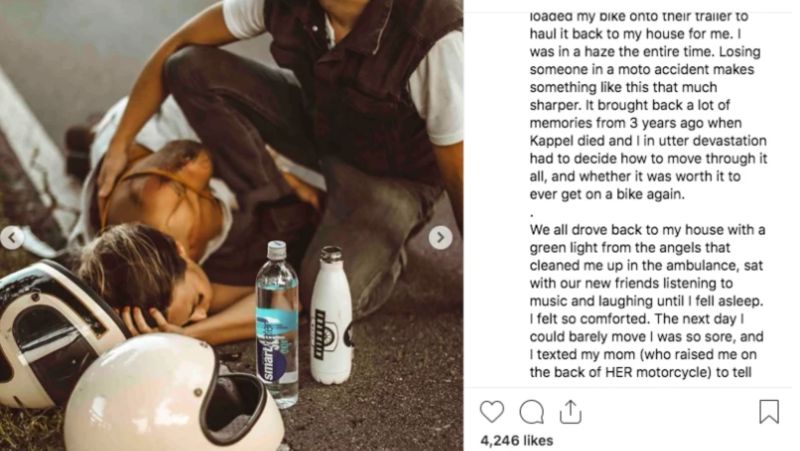 Tiffany has since denied the post was sponsored content and told Buzzfeed News she “would never turn a very important personal story like this into a brand campaign.”

The original post had a long caption. Tiffany wrote: "This is me and my bike an hour before I got into an accident. If you watched my stories Sunday you know all about it, but if you didn't, here's the scary, magical series of events." 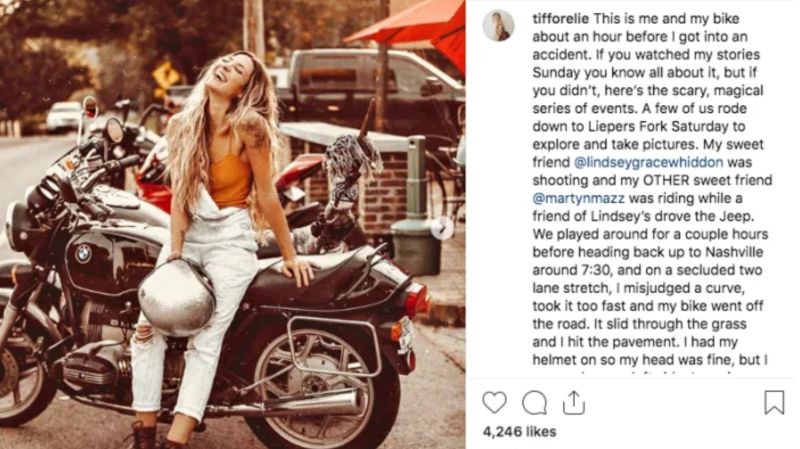 In her post she described the incident as "unreal", because she lost a partner to a motorcycle accident three years ago.

After explaining the traumatic event, she wrote: "We all drove back to my house with a green light from angels that cleaned me up in the ambulance, sat with our new friends listening to music and laughing until I fell asleep.”

Tifanny finished the post with: “I’m resting and healing up my arm, and @ianwhitetattoos may need to touch up my wildflowers, but I am feeling so much better."

She says that a photographer friend was driving with her, taking pictures of her at the time. Her friend continued to take pictures as Tiffany hurt herself in the motorbike accident.

But people became suspicious and accused her of posing for the pictures.

One comment read: "Paid in partnership with Smartwater…”, while another user wrote on Reddit: “Genuinely I am perplexed by the idea of a friend snapping angles right next to your head post-motorcycle crash. What the fuck?!”

Happy first day of summer!!! ☀️?? It’s gonna be a magnificent one guys. ? My top 3 absolute favorite warm weather sunshine activities: paddle boarding lake days, trips to the ocean, and moto rides with friends. ??? I hadn’t taken the bike out since last year and oh myyy I missed it so much!! ?? I met up with my adventure sistor @lindseygracewhiddon (she rides too, TRULY grateful for the number of female riders in Nashville ??), and we grabbed some pics while filling up my front tire and sipping @drinkbai. Such a sweet, refreshing, hilarious moment. ? What are your top 3 summer things?! Tell tell! Oh and help me name my bike. I can’t believe she’s still nameless after 3 1/2 years!! ? Leave a comment and I’ll announce my favorite in stories tomorrow!! ? #firstdayofsummer #Baipartner #flavorlife #whyweadventure

Tiffany told asked Buzzfeed News not to write the story as it would "draw negative attention to it."

She also denied any brand involvement in the post. Smartwater later confirmed the company does not have a partnership with her.

She said: “All motives for taking the photos and sharing them along with the details of the experience were good.

"I’m really sad that raising this topic without all the context may inspire negativity and hatred, but I did my best and hope whatever happens can add to people’s lives in some way.”

These photos have since been deleted from her account.