Rihanna lives in north west London and shops at Sainsbury’s?!?

OH MY GOD. Remember a few weeks ago when Rihanna did an Instagram story and there was a Sainsbury's bag for life in the background and everyone found it hilarious??? Well it turns out Rihanna lives in the UK?!

Finally a celebrity has a bag that I can also afford to have. Me, Rih and half of the UK gonna be twinning with Sainsburys finest💁‍♀️@sainsburys @rihanna #Rihanna #sainsburys pic.twitter.com/yTJgB3RmS7

It was revealed in a New York Times interview that Rihanna moved to London earlier this year, after buying a house last summer.

Here is EVERYTHING we know about Rihanna's recent move to London:

When asked what she's come to appreciate since moving to London, Rihanna replied: "Walking round the block." She says she tries to "keep it a little incognito" when going for a walk.

Rihanna's Fenty brand has recently branched out into fashion, so it makes sense for her to move over to Europe in order to be more involved with her business.

According to The Sun, Rihanna bought a £7m mansion in north-west London last summer. And people are convinced it's in St John's Wood because she's neighbours with Paul McCartney:

Rihanna that has been secretly living in St John’s Wood. That elite area of NW.

A source told The Sun: "Paul favours peace and quiet instead of partying. He does a lot of recording and home and knows Rihanna is renowned for a life of excess.

"A couple of residents have heard rumours she may be planning a basement renovation which can take months to complete and will mean constant noise."

She shops in Sainsbury's, just like the rest of us!!

In her Instagram story last week, there was a "I'm strong but sturdy" Sainsbury's bag spotted in the background. Bet she has a Nectar card too! 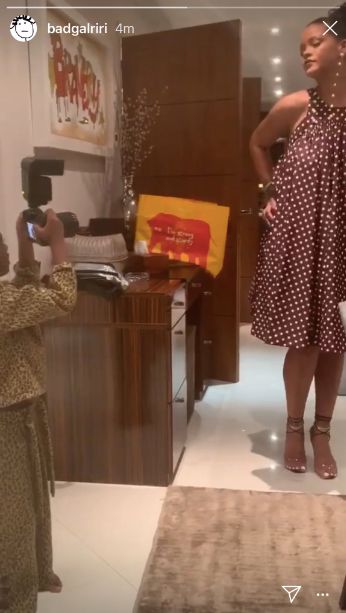 In the New York Times interview Rihanna said: "The world can really make you believe that the wrong things are priority, and it makes you really miss the core of life, what it means to be alive. It could literally be walking outside in the sun. That makes me happy. Like going to the grocery store — you know, there’s a cute little Jamaican market near where I live right now."

Her boyfriend Hassan Jameel lives in London too!

Omg are things getting serious between them?!

Ready for the midnight May drop? Don't sleep on the new @savagexfenty. Get it May 1st!

Move over Liz, the real queen of England is here now.

• The Rihanna birthday meme has got everyone frantically googling their birthdays

• ‘An employee pulled up my wig at work’: Why I quit my job at Fenty Beauty

Meet Demi: The history grad who is promising to finally spice up Love Island

She’s not afraid to step on toes

Every dating app bio to avoid like the plague in 2020

I really don’t care how much you travel