How to pull on a first date, a guide for boys and girls

We asked a group of girls and a group of boys how to pull on a first date, and wow, the techniques are different.

For girls it's all about eye-fucking, triangle methods and situating yourself in some dim lighting. For boys, it's all about nodding along, giving a compliment every ten insults (what??) and asking lots of questions.

If you need some instructions on how to pull on the first date then look no further. Pen and paper at the ready:

How to pull a boy, by girls

Pulling a guy on the first date is simple: it’s all about eye fucking. If you look at a guy dead in the eyes with the look of “I want to have sex with you” they will undoubtedly get the hint.

But because boys are stupid they probably will be thinking two things: 1) I think she wants to have sex with me because she’s giving me the eyes, or 2) why is she looking at me like that, I don’t understand, what is sex? Because of this, you’ll probably need to do some breezy touching like lightly on their arm, or play with your hair. And if they don’t get the hint after that, they’re probably not worth it and shit in bed. – Lucy, 23

Guys like girls with confidence, so if you sound sure of yourself and keep the conversation going, you'll up your chance of pulling. IIf you’re feeling extra fruity and extra confident, go for one drink, have a chat and then just flat-out ask if they wanna go back to yours (only if you think they’re really into you). What guy is gonna turn down that offer?? – Sophie, 20 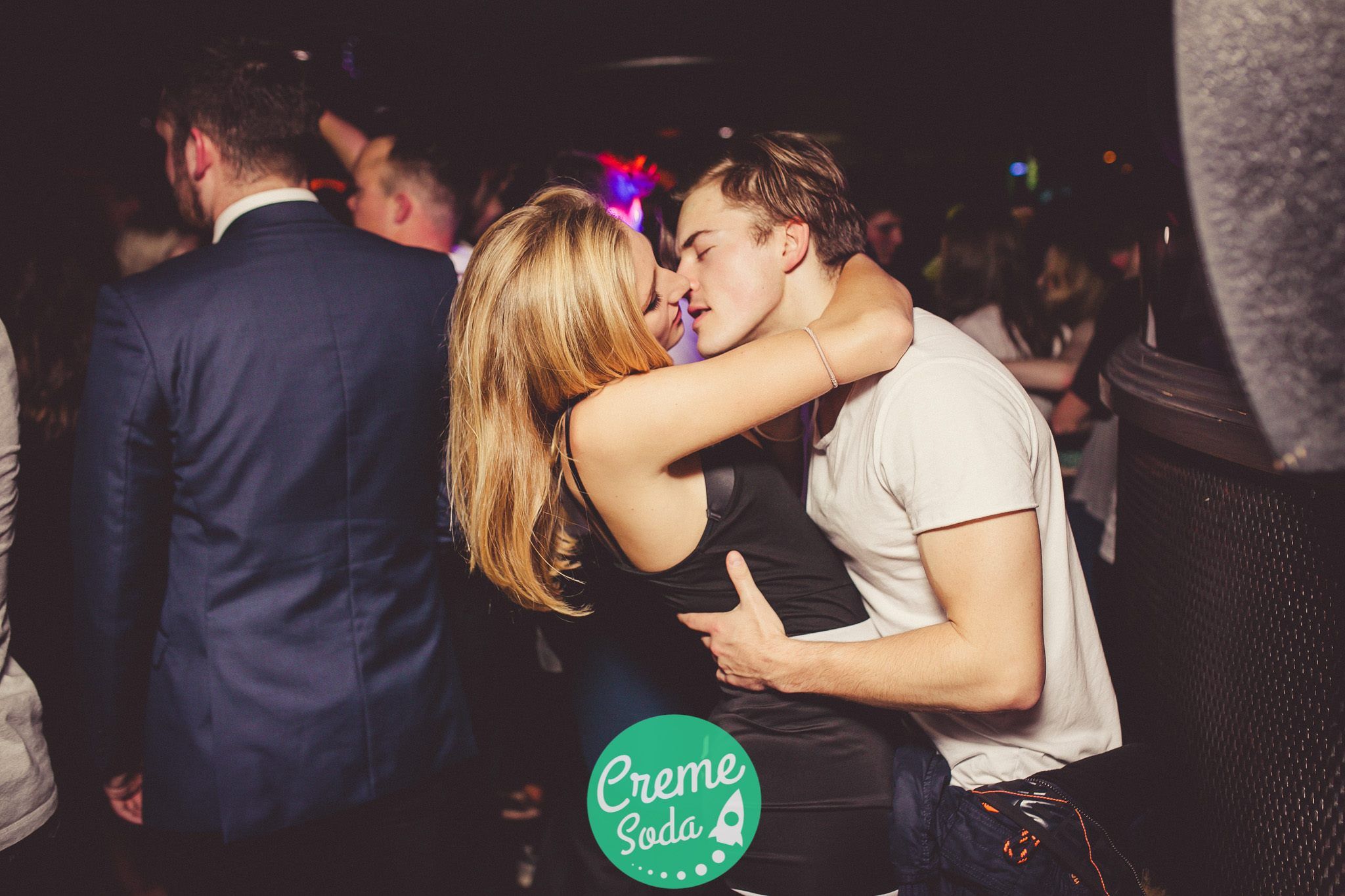 ASK LOTS OF QUESTIONS ABOUT HIM

Talk about him. Boys love talking about themselves and it’s a good excuse to ask questions and act interested. Or fake interested if you’re genuinely just in it for the shag. – Marissa, 21

It’s always good to ask a lot of questions and move you head and eyes to show you enthusiasm (or feign an interest if this is more a hookup). Boys like to talk about themselves, and will love it if they think you like talking about them too. – Chloe, 21

When you are ready to kiss: use the triangle method. Slowly look at one eye, then the other, then stare at their lips for five seconds. They will know you want it. You will get it. – Grace, 25

WHERE TO TOUCH, AND HOW MUCH

Find any excuse to touch them, not in a weird way, just like a light arm touch every now and then. Do the classic move of giggling and then lightly touching their arm. Hahah Dan you are so funny let me touch your bicep. Also other small touches can be just as subtle but sexy too. Like knees touching under the table. No one would ever think knees could be sexy but in this instance they kinda are. – Shanice, 18 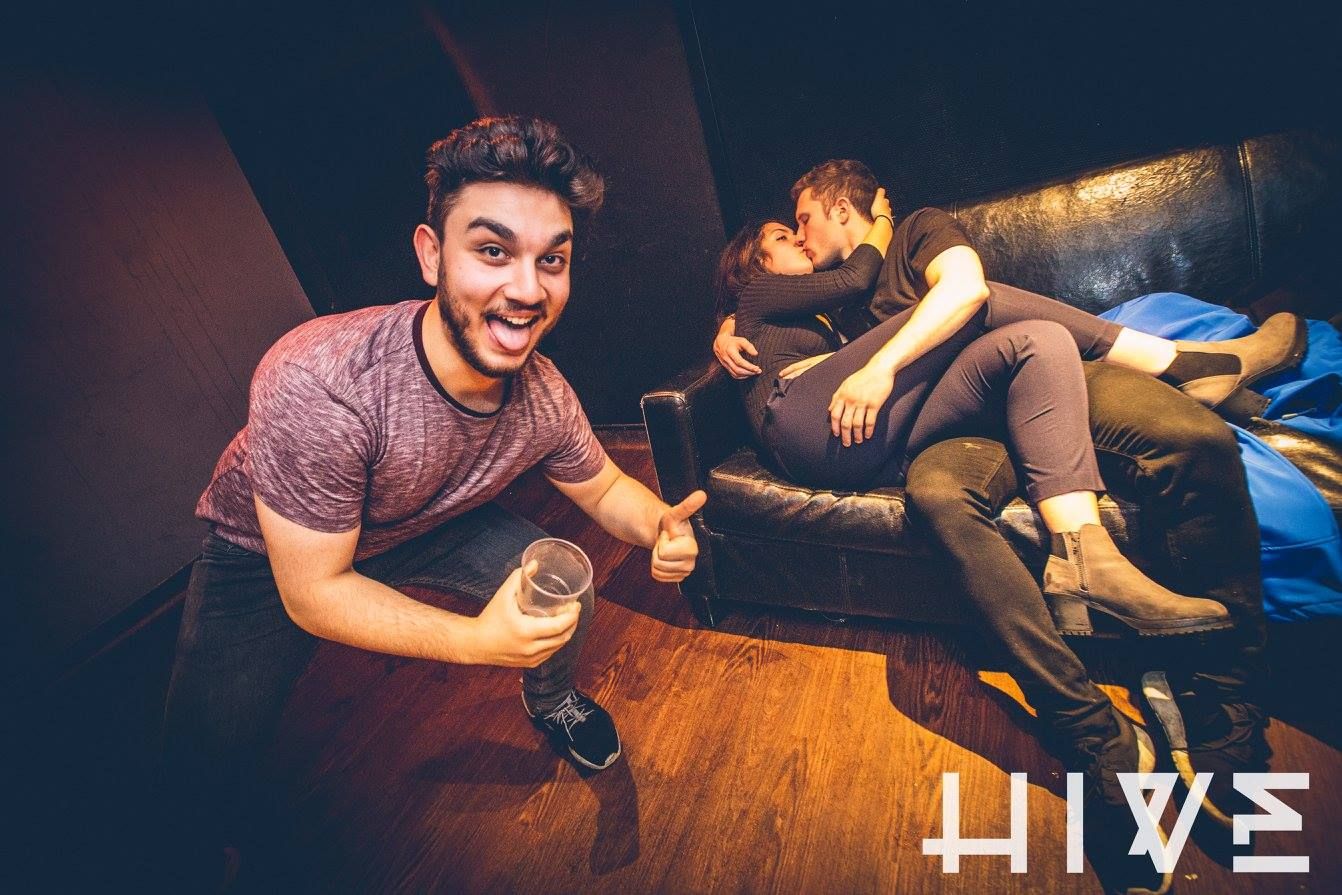 Don’t go too heavy on the compliments because boys literally don’t know how to process compliments. They aren’t like girls who compliment each other in every possible instance, so if you’re too nice they’re like a deer in headlights. – Maddy, 19

It all starts with the setting: go for somewhere with dim lighting where you can sit next to them, not opposite them (this isn’t an interview). On the outfit: I always go for something that’s pretty covered up but with a very low neck. It’s almost like a test: will they look or not? – Evie, 24

Smiling (and laughing) is a big one for me: it makes you look enthusiastic (don’t be cheesy though) but it’s super flirty. If I’m sat a table, I’ll lean on the table and rest my chin on my hand but in a delicate way. It makes you lean forward and look interested. Don’t you dare flirty take your eyes away from their eyes for even one teeny tiny second. – Hannah, 20

HOW TO GET CLOSER TOGETHER

If a date’s going well and you want to get closer, my move is: slide closer to them, lean into the seat on your elbow, and lean your head on your fist. It’s a good way to get close to their face, look cute and get some leg touching involved. – Grace, 25 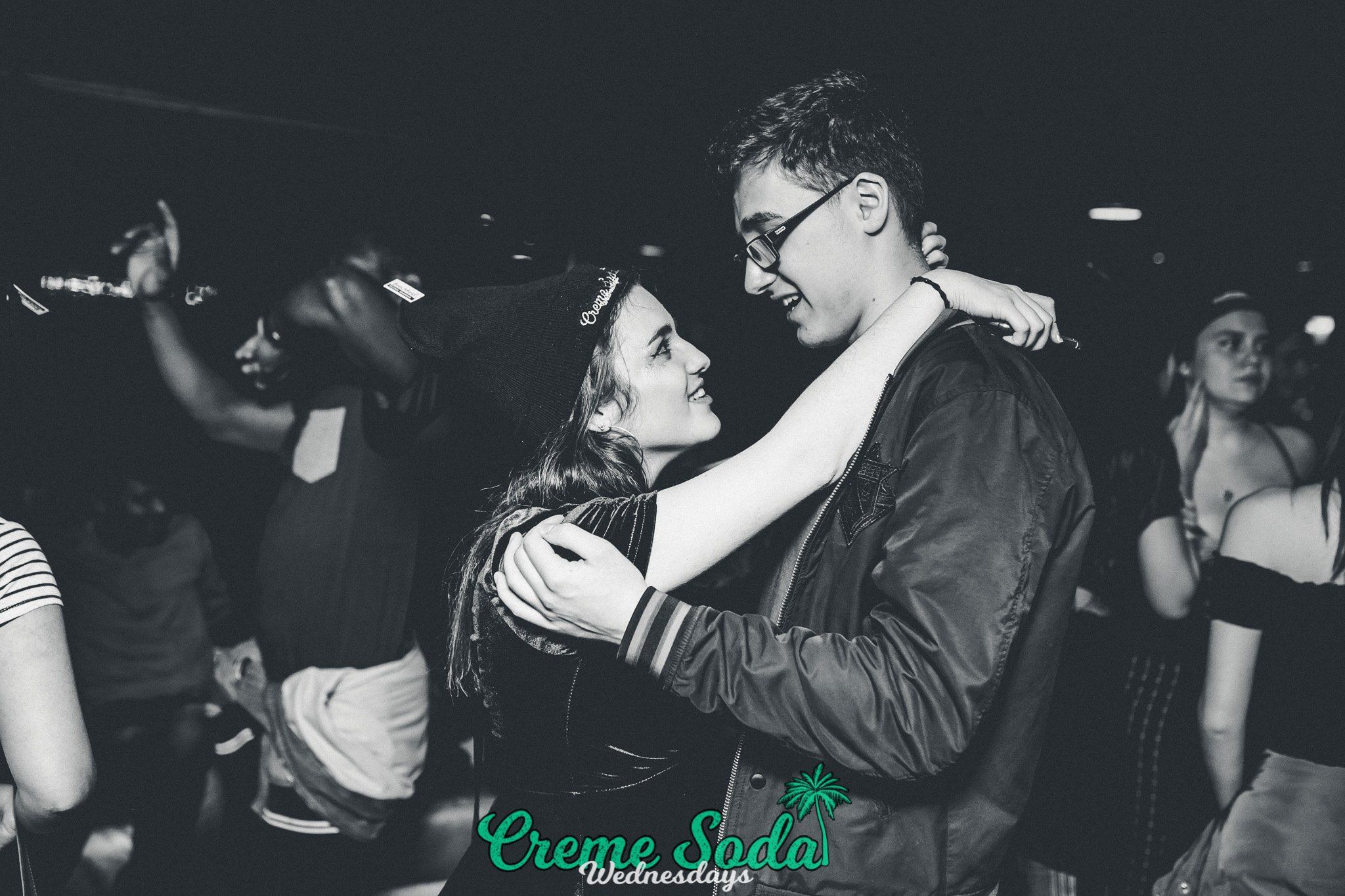 How to pull a girl, by boys

VISUAL CUES TO LOOK OUT FOR: EYE-FUCKING

Pulling a girl is often quite simple but us boys make it overly complicated. Often it is just about listening to what they are saying or looking at them and taking in visual cues. It’s not necessarily our fault, no one ever told us these things and we’re just meant to figure them out for ourselves. Come on, we are not rocket scientists.

The easiest way to explain pulling to dumb boys is that it is a step-by-step process involving simple calculations and rules, like working out whether it’s better to bet on there to be three corners between 60-70 minutes or over 1.5 goals in the second half.

Exhibit A: If she is looking at you in the eyes, smiling, and not speaking, this is what ‘they’ refer to as “eye-fucking”. This is basically their way of saying “let’s go have sex” but making you figure it out for yourself. Like when you think you’ve completed a level of Super Mario but then there’s the tricky bit with Bowser at the end. – Tom, 24

A date requires flirting, it’s almost like a clubcard situation where you have to build up in order to eventually cash in. Flirting is a simple combination of being mean (in a funny way !) with the odd compliment thrown in. I’d say one compliment for every ten times you take the mick out of them. – Ollie, 20

ENGINEER A SITUATION WHERE ONLY YOU TWO WILL BE THERE

After you’ve built up a rapport, the situation requires balance and composure. Don’t just ask them out in conversation, that would be ridiculous. You have to engineer a situation where either you end up on an impromptu date “randomly” or be out with a group of mates and suddenly you are the last two left. – Mark, 21 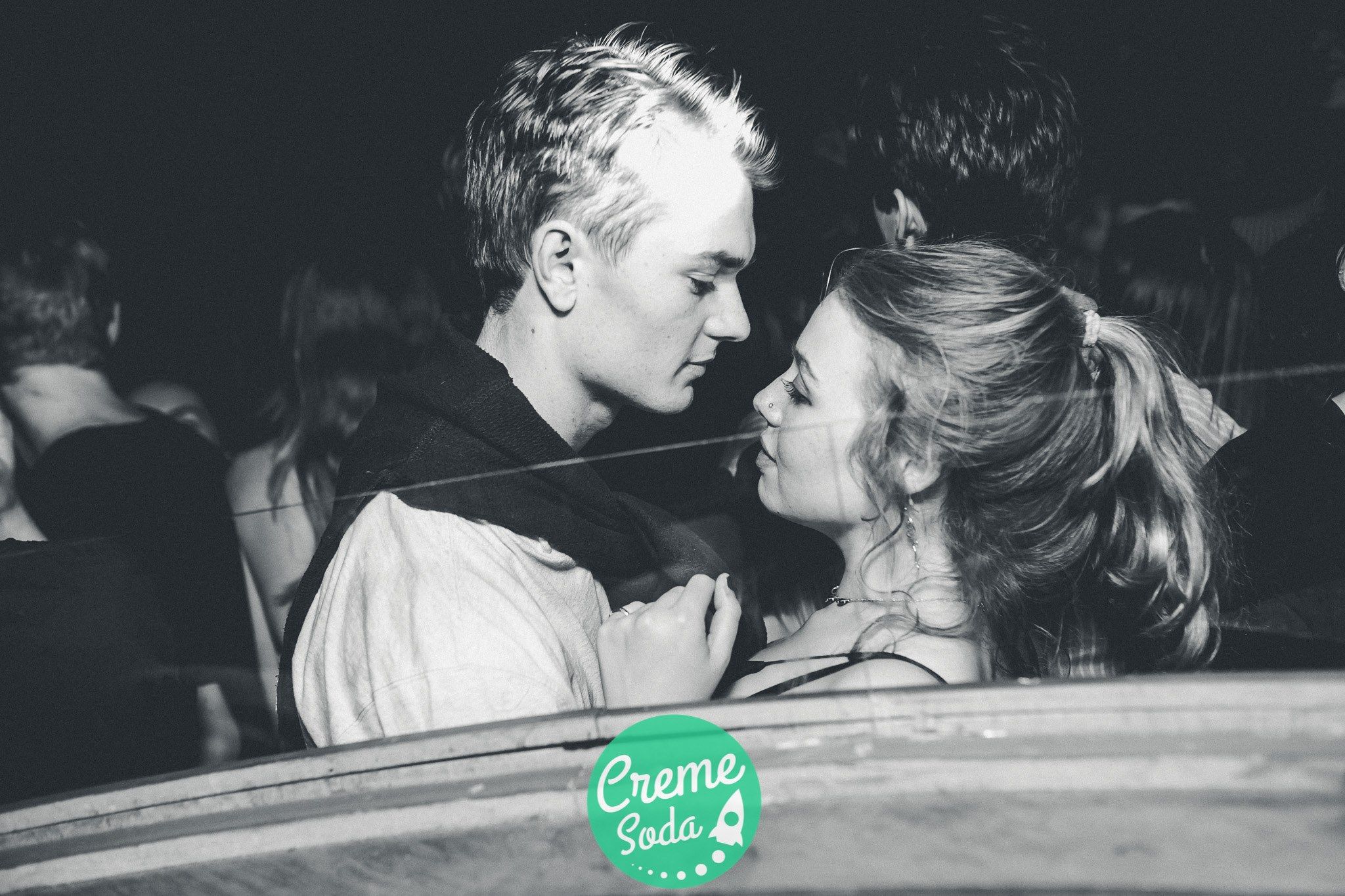 HOW TO READ THE SITUATION

This is the trickiest part, fraught with danger. This stage is basically like an episode of Golden Balls, you have to do all you can to try and figure out what the other person is thinking. Sure, you’re not competing to win a life-changing amount of money, but the pressure is still on. Your best bet is literally to just listen and try and pick up on body language that says in as many words, “I want to fuck you”. At some stage you’re going to probably have to gamble and go for it if you’re sure. As the saying goes, if you don’t buy a ticket you can’t win the raffle. – Rob, 25

IF SHE INVITES YOU TO STAY OVER YOU HAVE DEFINITELY PULLED

If she invites you up to visit her in Nottingham then you can be pretty sure you’re both on the same page so just crack on. I realise this is a very specific situation but helpful nonetheless. – Jonny, 23

Compliments are the key to a smooch-session. What a girl wants to hear 24/7 is how cute she’s looking: whether just rolled out of bed, in pyjamas, or in her recently bought PrettyLittleThing dress. Call her cute when you first see her, tell her how pretty she looks in her outfit today, treat her like a princess in the streets, and she’ll definitely treat you like a king in the sheets. – Ed, 18

DON'T TALK ABOUT YOURSELF THE WHOLE TIME

Try not to talk about yourself for the whole evening, if you manage to pull this off you immediately separate yourselves from about 90 per cent of the male race and this quality is something that is definitely attractive, increasing your chances of pulling, and also something she will actually report back on to her mates. – Dom, 20

TAKE HER SOMEWHERE DECENT FOR A FIRST DATE

Never think going on a date to a college bar is a good idea. Surprisingly, girls tend to think that sharing a bowl of nachos and having pints of Carlsberg is a bit of a shit first date. Nothing more screams interest and confidence than making the effort to go to town and order fruity cocktails in a bar with neon lighting and hawaiian palm trees lining the walls. – Gabriel, 21

Other articles this author recommends:

1) The Tab’s guide to dating

2) What gaslighting is, and how to spot the signs of it in a relationship

3) Bored of Tinder? Cut straight to the sex with 10 of the creepiest dating apps around