Around Valentine's Day women always go on about how they want to find a guy who will bring them chicken nuggets. I mean what is more romantic than processed deep fried chicken?

happy valentines day everyone… I have a date with mcdonalds ?????

for valentines day id be happy with a mcdonalds feast

Lucky for me, this year McDonald's have created a romantic menu for two. Surely I can get a guy whilst eating this?

For starters you get a choice between Cheddar Bites, chicken nuggets and carrot sticks with Philadelphia. Unable to see any of them, I get mozzarella sticks.

For the mains you can choose from any burger, so obvi I go for the Big Mac.

And for desert you can either get a McFlurry, fruit bag, apple pie, or a muffin. I go for the fruit bag. Lol jokes. I got a McFlurry. 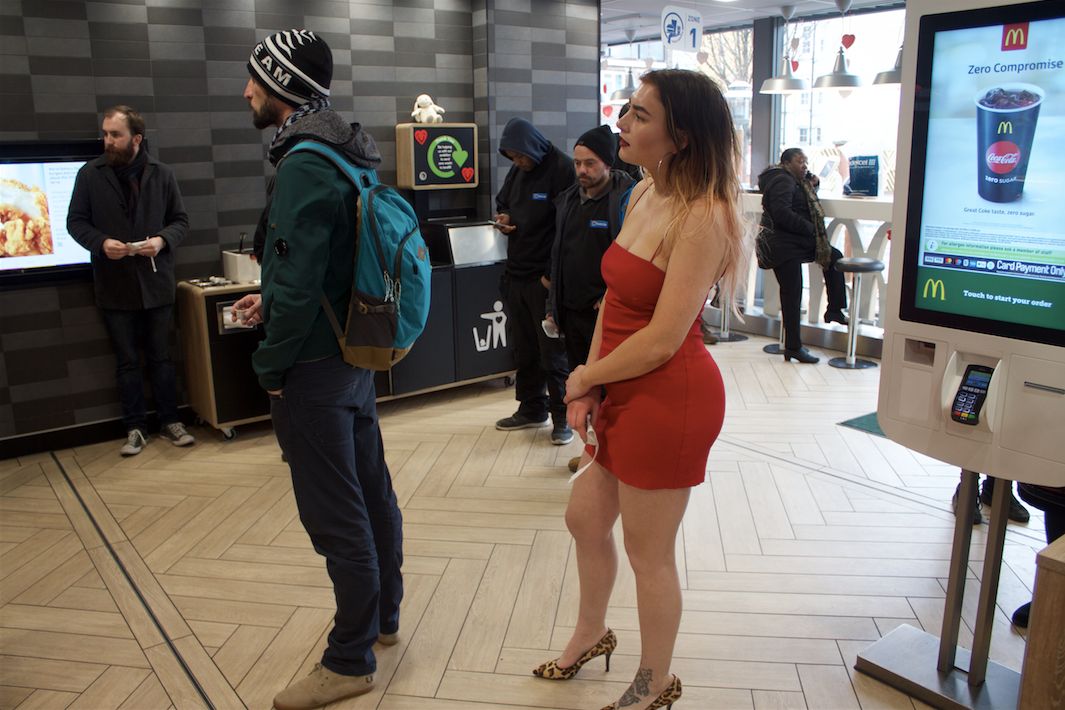 I am wearing heels in Maccy's: Bit more attention please? 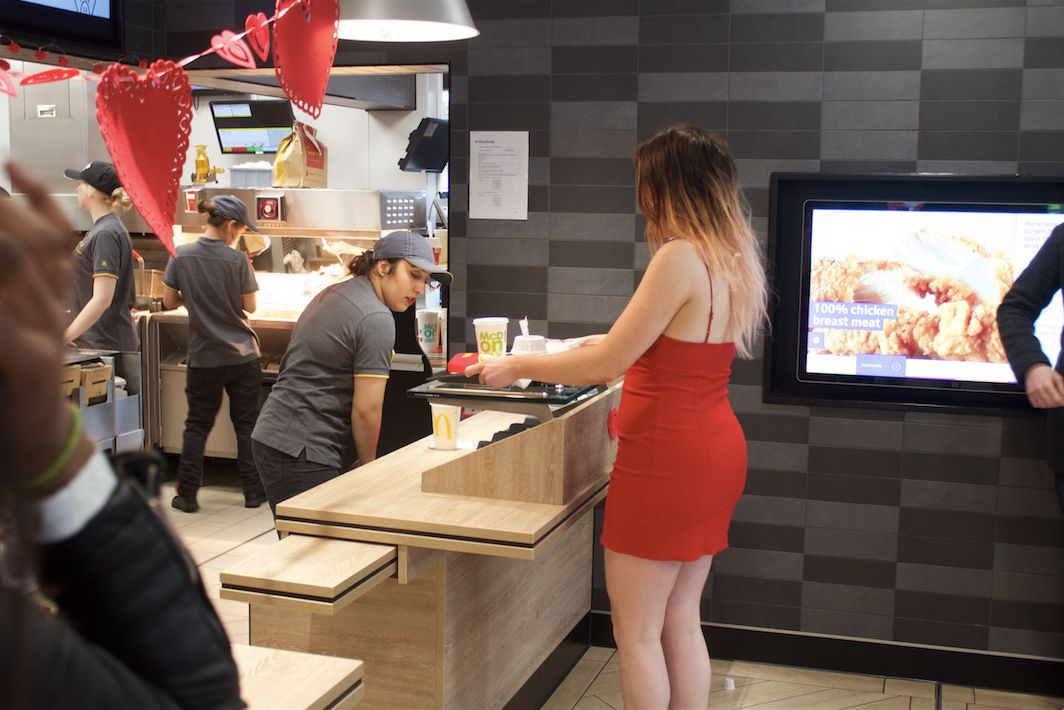 Absl shook that I was not offered table service

I take my food and sit down, turns out this place is an absolute dead zone. I thought their might be loads of lads, the sort that talk about Fifa and lurk around shopping centres saying, "hey beautiful". Naturally there are a lot of kids. 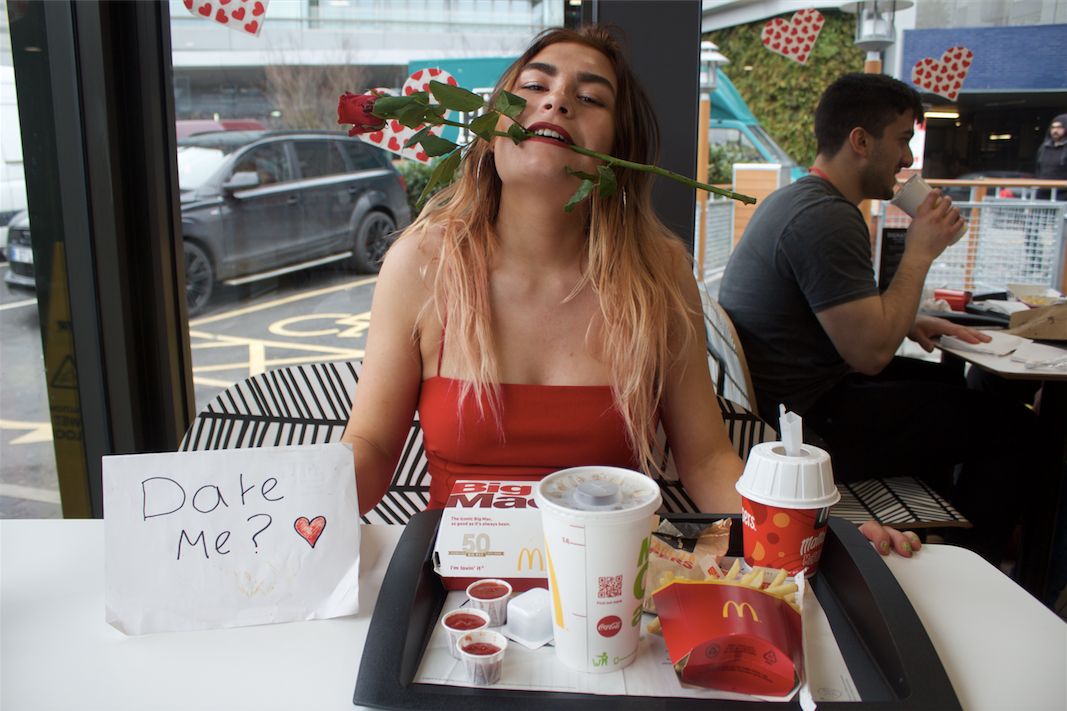 I finally spot a guy, he is a construction worker because apparently builders don't call themselves builders anymore. But guess what? This loser is eating a Fillet 'O' Fish. 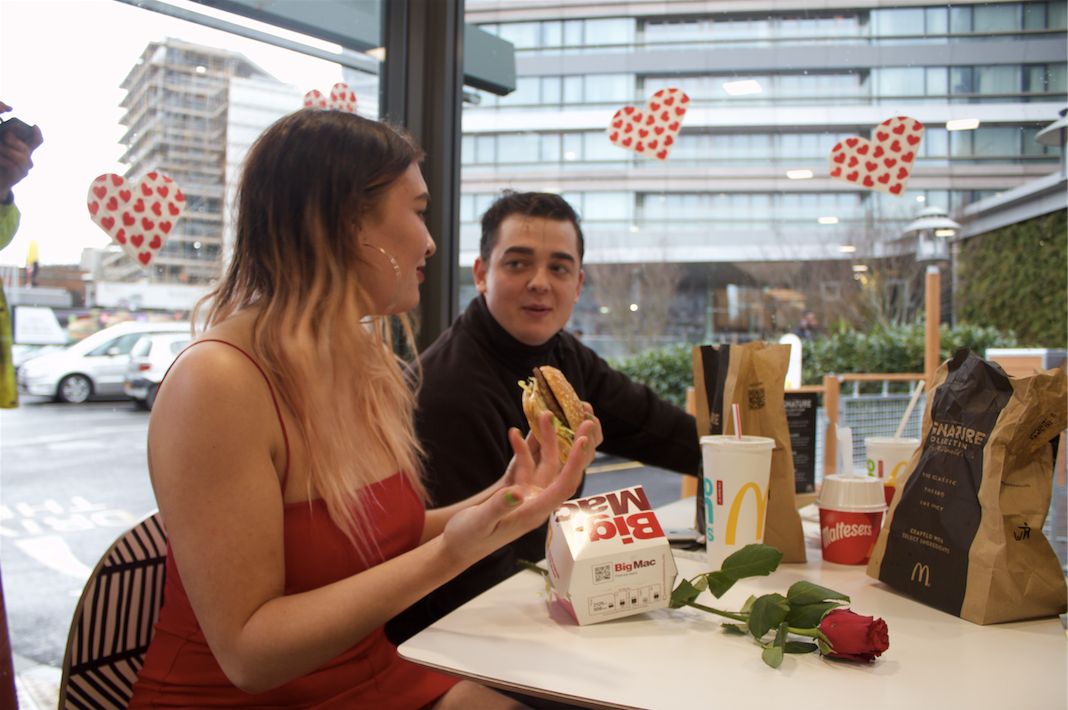 He is okay though, swear down he is not even that weird. He manages to hold a conversation with me.

His whole posture sort of subtly leans away from me like you do when you're at a family party and some woman called Sharon comes up and starts telling you about how she used to change your nappies when you were "a wee bab".

I asked if he wanted a chip and he said no, I think he was concerned I might have spiked it.

A hot Deliveroo driver walks in. 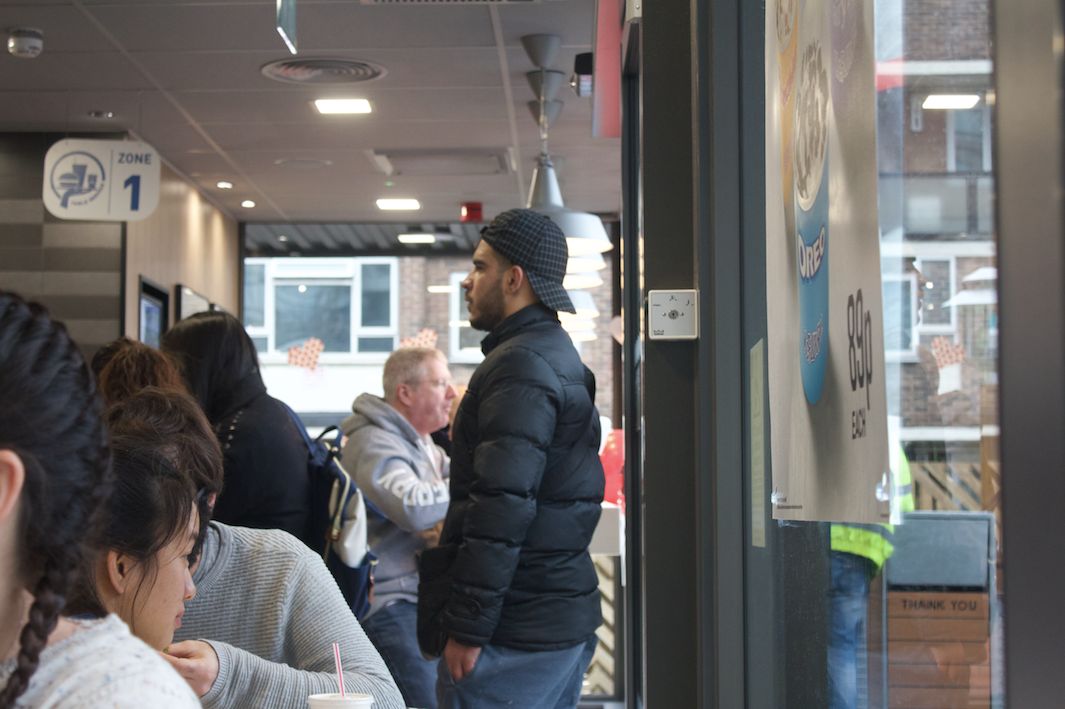 He looks pissed off and I am into it. I can imagine us cuddling up on the sofa together in from of Don't Tell the Bride, talking about how hot/cold/hungry/tired we both are, because let's be honest, that is what relationships predominantly consist of isn't it?

I wave at him, like I really wave. He just shakes his head and turns away. It wasn't actually a question but okay? 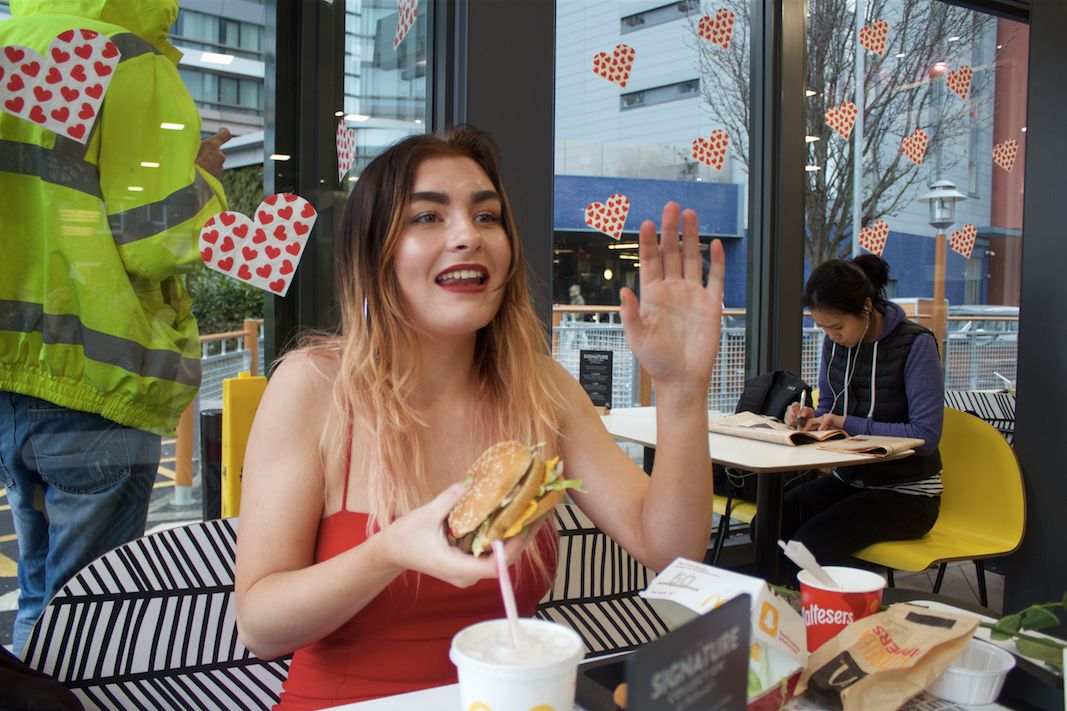 The only love I have is for the processed beef, limply sat before me. The mozzarella cheese bites have congealed and hardened. This chewy stick is probably the only long thin object going in my mouth tonight. 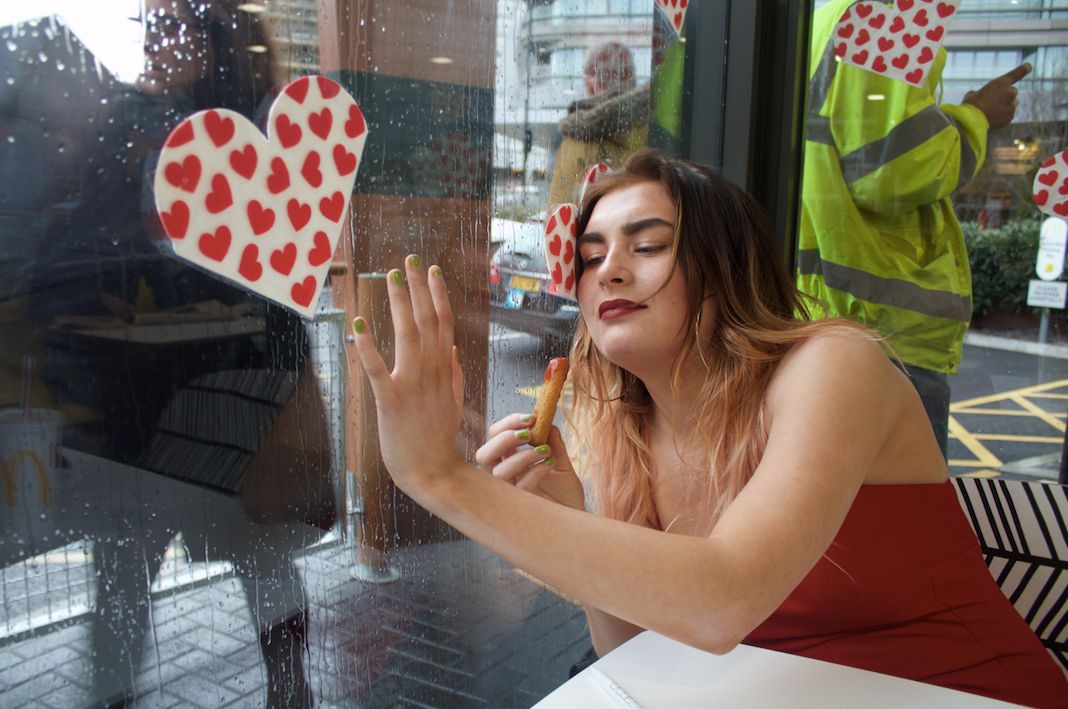 Maybe I have come to the wrong place? Students don't eat Maccy's anymore, they go on the cross trainer and eat Tuna and cucumber baguettes from Pret. 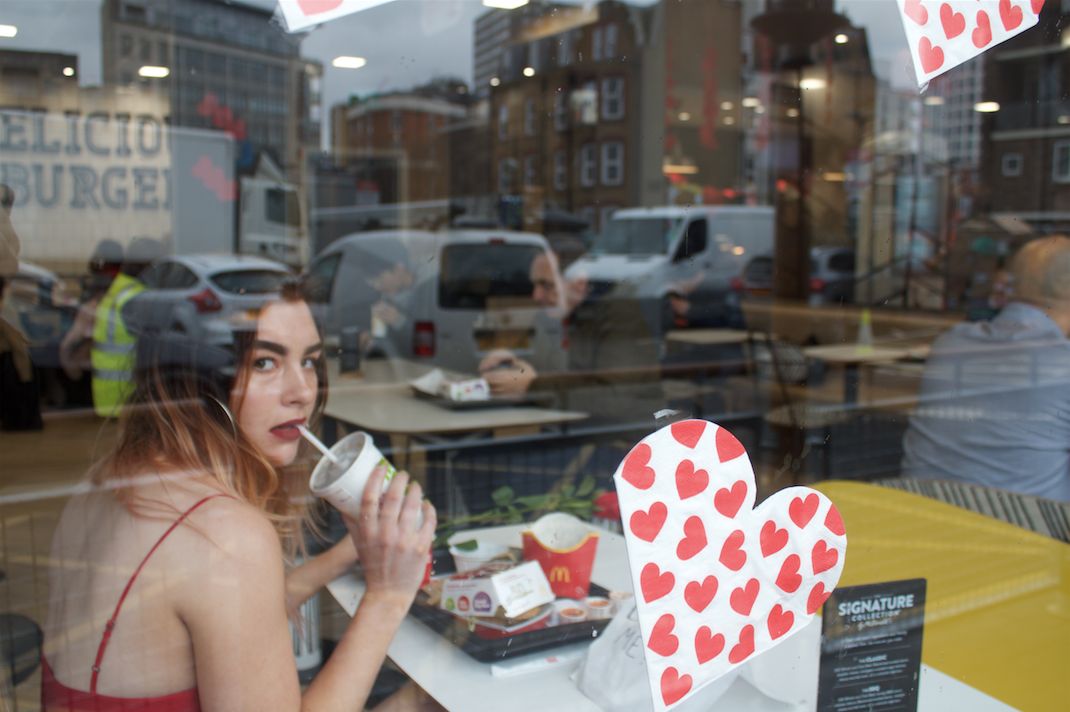 Maybe I should have got a Happy Meal?

But I am not one to give up, I ruffle my hair, push my boobs out and pose with my burger like it's a really cute clutch bag. 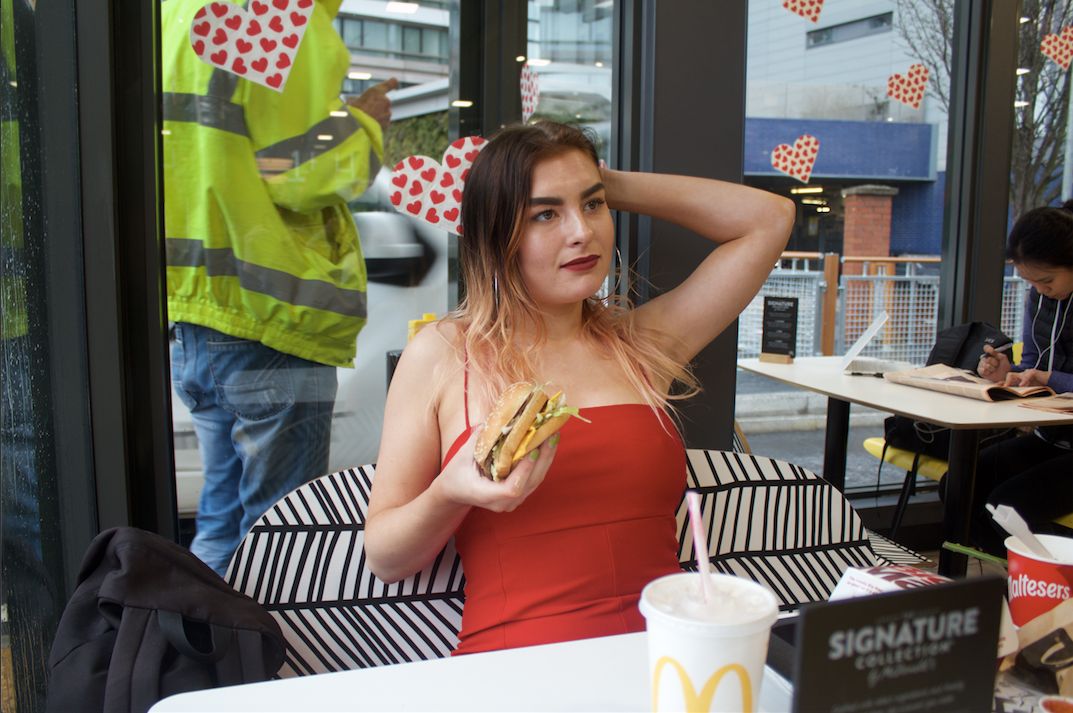 I am eye fucking everyone so hard, I should win a Bafta for this performance. 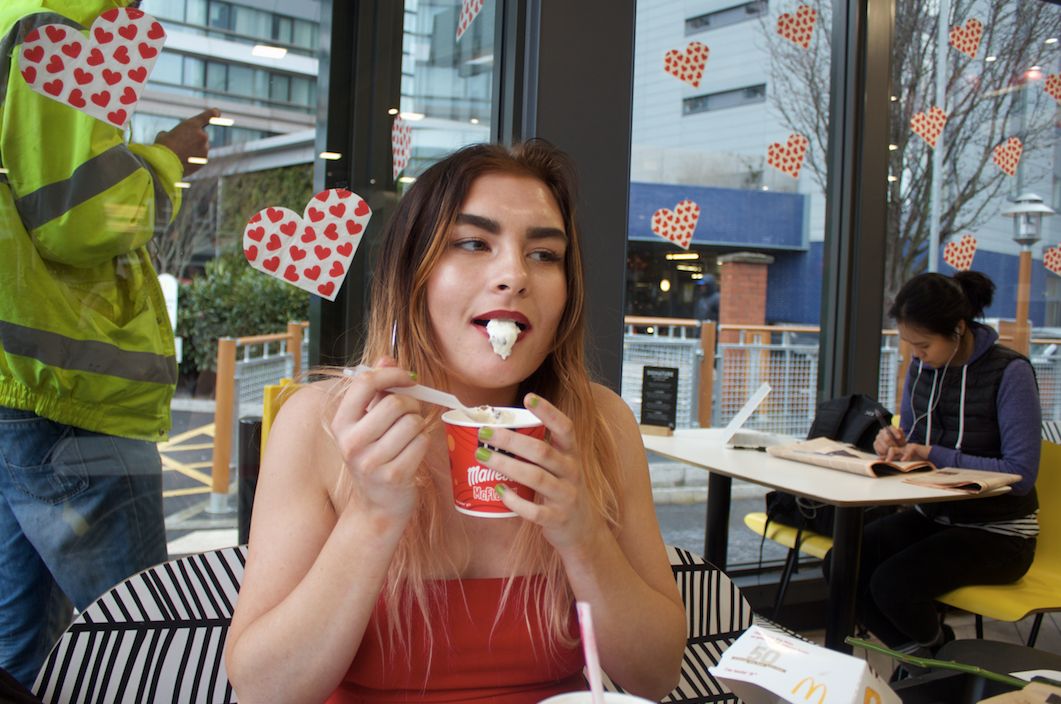 Can confirm this is a McFlurry x

It works. Another builder approaches and this one is eating a Chicken Legend. 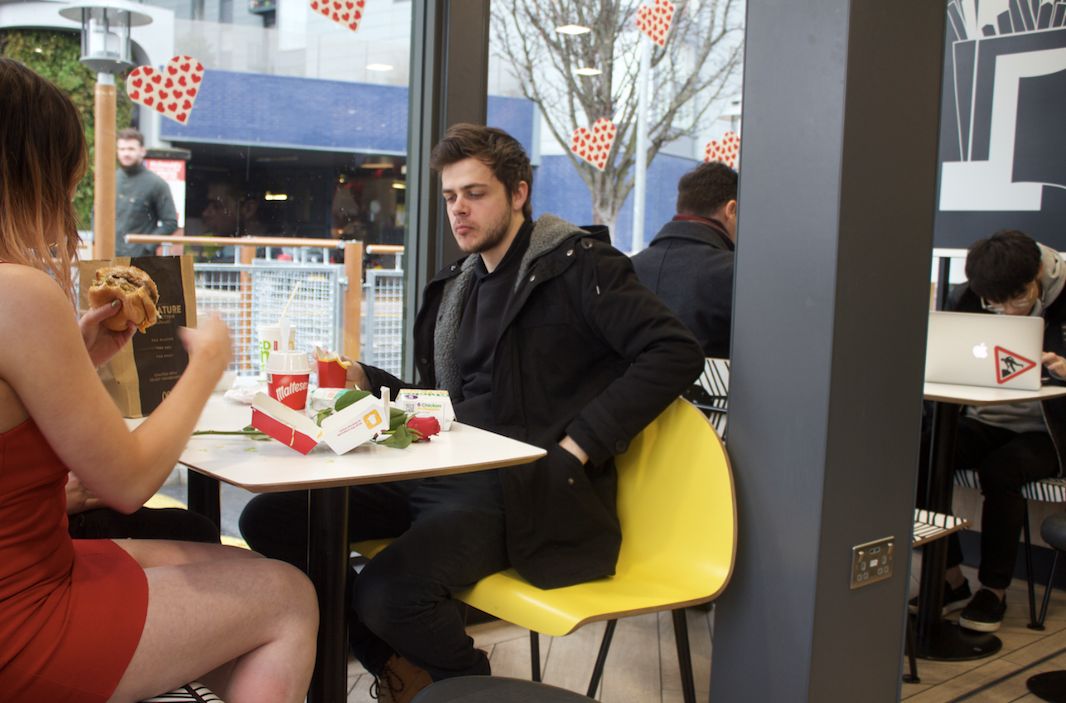 He doesn't give much away and by that I mean, he doesn't say anything. I ask him what he is constructing.

Yeah cool man. It gets so quiet, the only thing I can hear is my spit smacking around.

He gets a phone out his pocket. "Who is she? I'll fight her" I say.

"Not anymore", I don't even get his name and he chomps the rest of his meal and leaves. 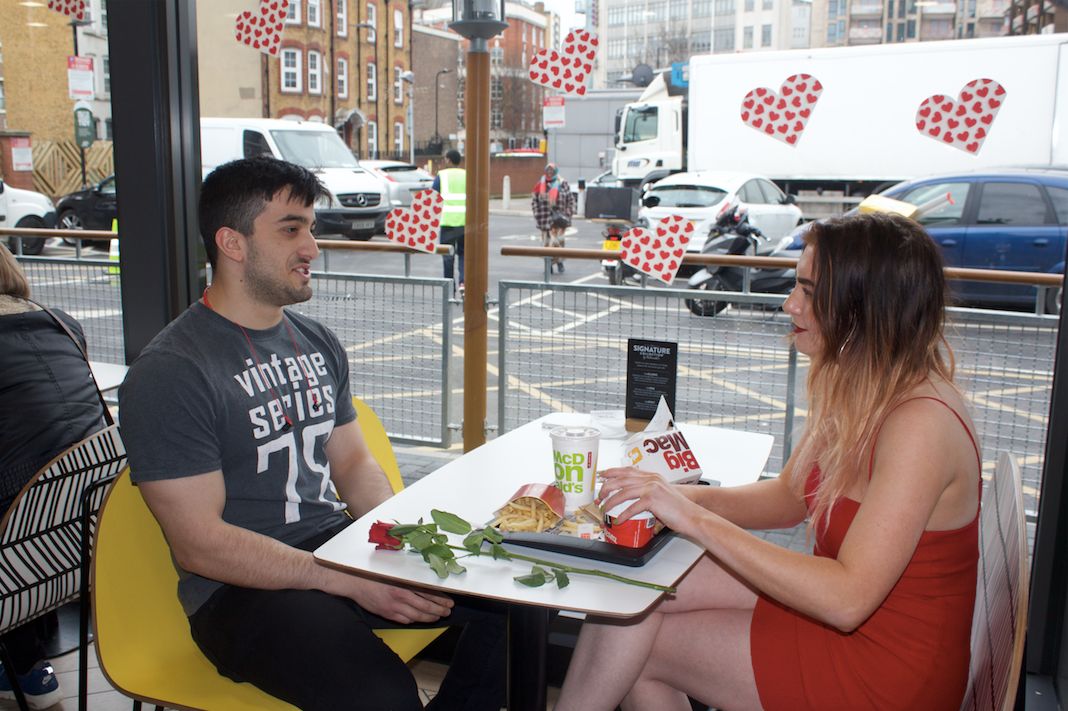 After the limpest dating session of all time, I see a guy chuck the remains of his Big Mac in the bin, he's heading out with his mates, his arms are as big as my thigh and at this point bulk is enough for me. Tbh as long as there is a heart beat, we good.

I start the conversation like an actual pre-teen, "hey this is so random but…"

Turns out he's an Engineer. Makes sense, he wears a serious expression, his top was definitely purchased from Next and he has the solid jaw line of someone who can put up shelves.

The chat is a bit dead, I mean he asked me what I was doing tonight twice. The first response of "watching First Dates and exfoliating off my fake tan" was obviously so dry he actually forgot. But look at this spicy chemistry: 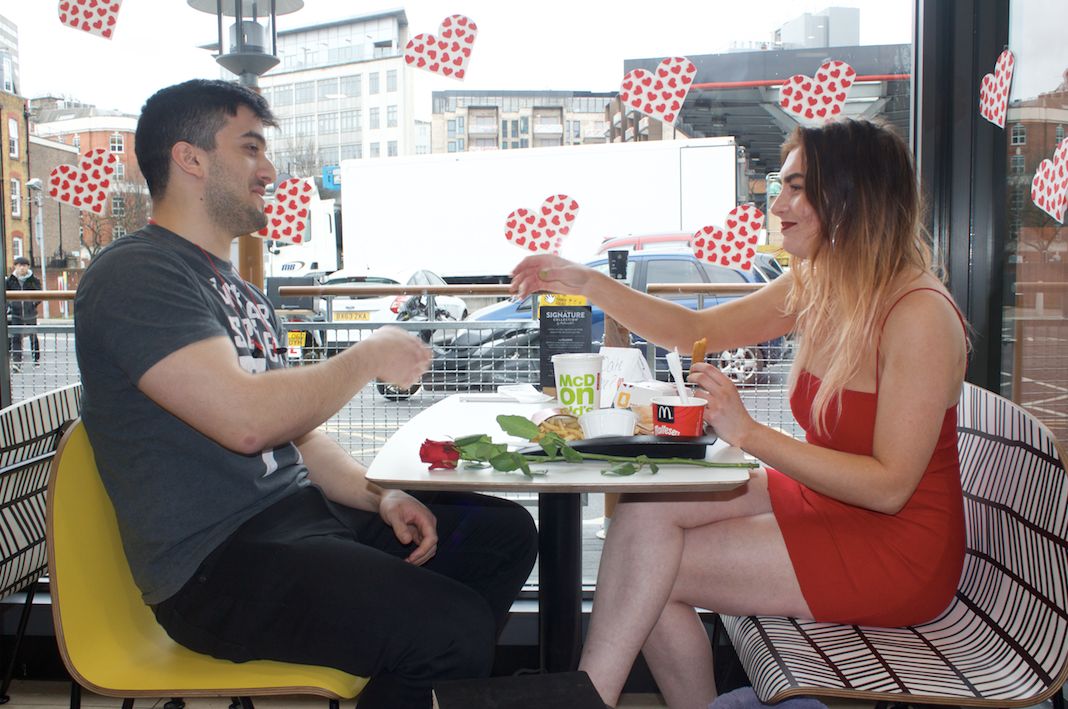 He asks for my Facebook which seems quite year 9 but whatever.

The night draws in and I see if I can get one more number. The next guy is cute, although when I nick one of his chips everything gets frosty. 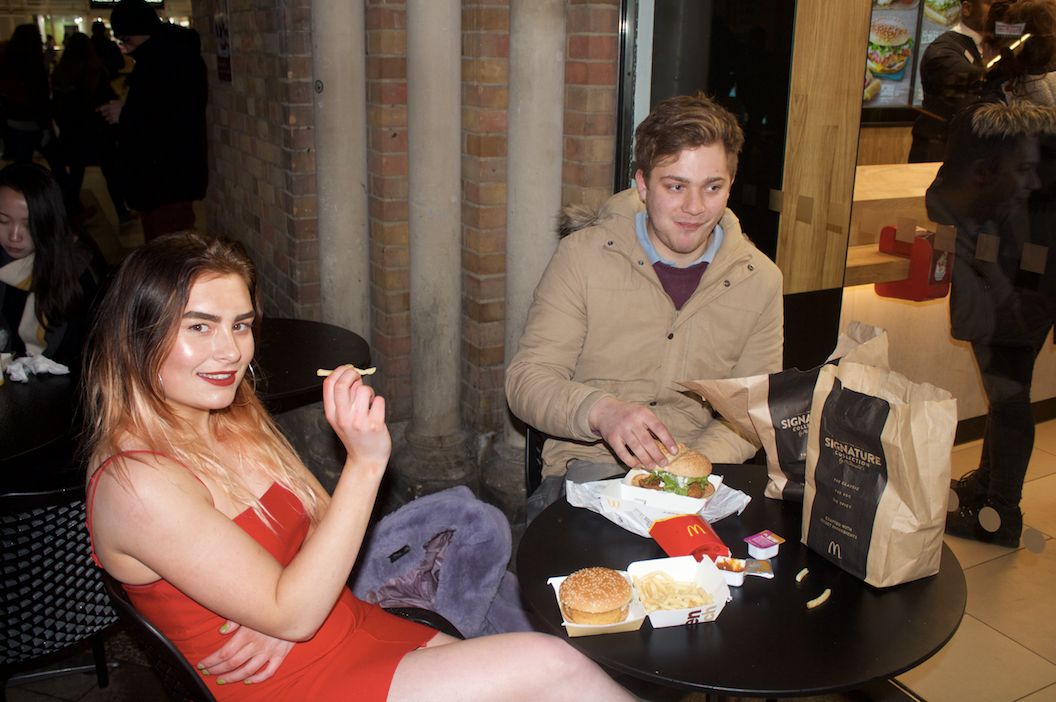 So basically, you can get a man in McDonald's. I mean I got two numbers. Would I recommend it? Probably not. My mouth is so lined with grease it tastes like I licked the back of an oven and my chat with most of these guys was like slowly banging my head against a wall. Although Mr Engineer could fix my broken heart?