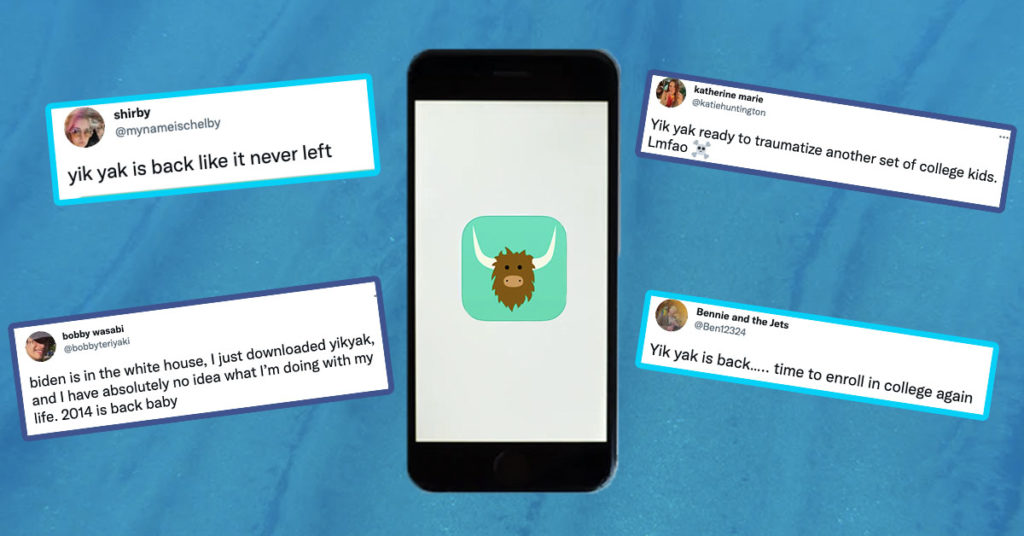 No one asked for this

It’s official, Yik Yak, the app no one asked to return is back after a four year break. And seriously, who thought it was a good idea to bring back an app long associated with cyberbullying, death threats, racim and sexism?

Yesterday it was announced on the app’s official Twitter page Yik Yak had returned to US with more locations and availability on Android soon. They promise anonymity and the hot feed we have all apparently missed.

They said: “ICYMI: After a 4 year hiatus, Yik Yak is available in the App Store again! Anonymity, location-based, the hot feed & more — everything you used to love about Yik Yak!

“Now available on iPhone in the US — more countries and devices coming soon!”

📣 ICYMI: After a 4 year hiatus, Yik Yak is available in the App Store again!

💭 Anonymity, location-based, the hot feed & more — everything you used to love about Yik Yak

👋 Now available on iPhone in the US — more countries and devices coming soon!

In case you’d pushed the memories of Yik Yak into the depths of your brain or you were in year eight when Yik Yak first launched then let me give you a run down of the app’s short but intense history.

The app launched in 2013 and was a place where you could post anonymously based on your location. It was big in uni and college (unless your college banned it) as the location proximity meant everything you were posting was relatable to most people in your area. Users would post about parties, lecturers they thought were fit or mad things they’d seen on nights out.

However it was quickly hit with accusations of cyber bullying that included death threats, racism and sexism. In 2017 a lawsuit was filed by students over the app and around this time it was shutdown.

Now though it’s back and whilst some people are keen to feel all nostalgic, many are remembering what really went down on the app.

Yik Yak’s revamp includes community guidelines which outlaw sharing personal information and bullying and harassment. Some people have already downloaded it with users in New York using the app to plan hook ups and reflecting on the old app.

The app is yet to be available in the UK and honestly it can stay that way.

•Um guys, Bebo is coming back next month