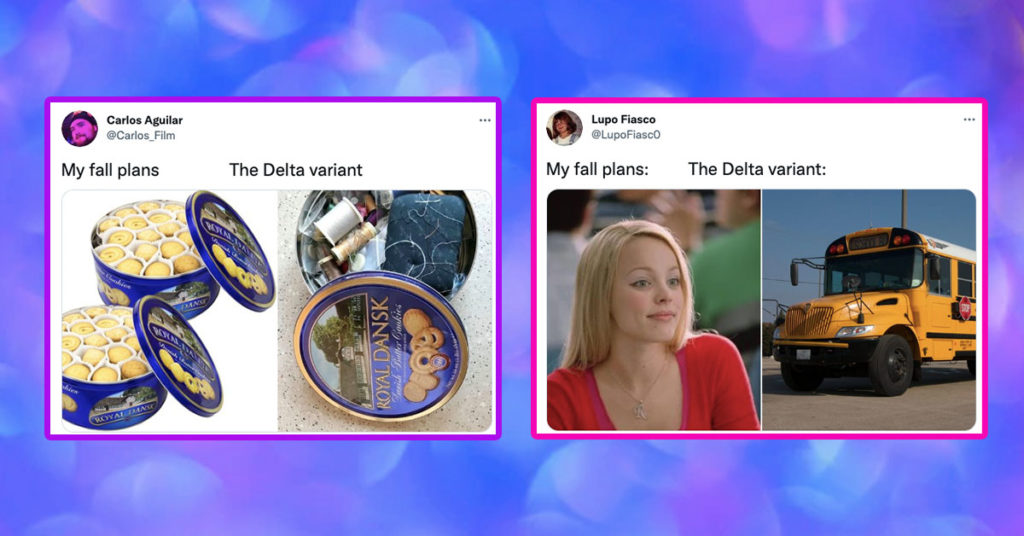 That sewing tin is always a disappointment

It’s been a while since we had a pandemic themed meme but now the Internet is back in full force with the “my fall plans, the delta variant” memes. The meme has been doing the rounds on Twitter after a surge in COVID cases in the US due to the Delta variant, another strain of coronavirus.

It’s a pretty straight forward meme and uses two pictures from popular culture to sum up expectations vs reality. The expectations are fun and exciting fall (autumn) plans and then the reality of them all being cancelled because of the virus. Usually the meme references moments in TV and film that were disappointing, surprising or ruined by something.

According to Know Your Meme the first meme was tweeted on 8th August 2021 by @jush_for_fun and featured Shea and Sasha from Drag Race season nine. Since then everyone has been applying the format to Mean Girls, Love Island and Scooby Doo.

These are the funniest “my fall plans, the delta variant” memes:

2. He needs to be dumped ASAP

3. If it weren’t for those meddling kids

6. All rise for Queen Dakota

7. Imagine getting dumped for the woman who wears curtains

8. That iceberg has a lot to answer for

10. All that faff for a drop of blood

13. An iconic film to say the least

14. Still not over the betrayal

My plans The Delta
For Fall Variant pic.twitter.com/zajFCKHkds

19. Meredith is the greatest movie villain

•Goblincore: What is the viral TikTok aesthetic and how do you get the look?