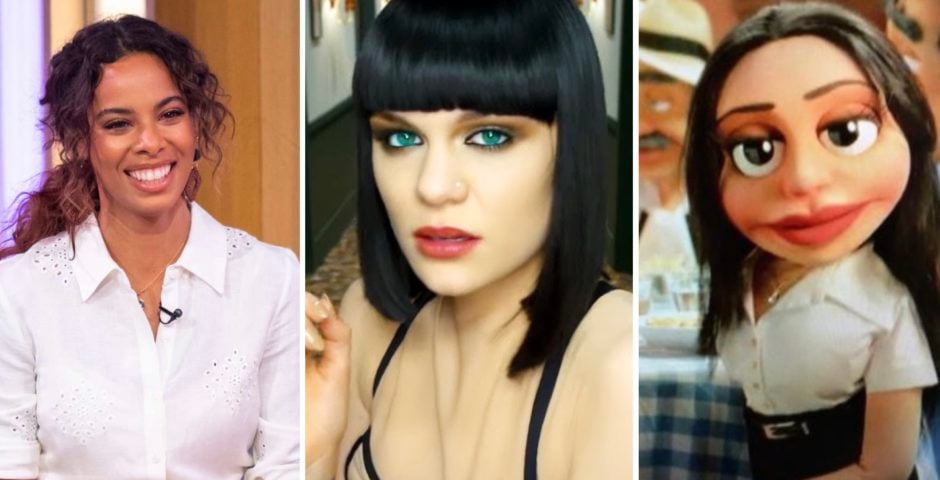 Fake Rochelle and fake Marvin really have it rough

The parody account remains to this day the best thing on the internet. It literally never misses. Never gets old. Just a consistent stream of absurd and obviously fake situational laughs.

Ellie Goulding says she can’t believe there are more than 800 missing people in the UK.

“Where the fuck are they all?” she said pic.twitter.com/zOTtDm5sEf

The stray tweets are golden on their own. Just a celeb making a sweeping statement with a bemused picture to accompany it.

But where Fake Showbiz News hits its stride is with the sagas. The running jokes. There’s some poor celebs who now have become so wrapped up in the weird, imaginary FSN lore that I’ve had to set up Twitter alerts so I don’t miss the latest fictional update on the plotlines.

It’s the kind of stuff that has you sat wheezing to yourself on the train. Proper belly laughs.

Here’s 10 of the best ongoing sagas over on @FakeShowbizNews:

Louise Redknapp SCRAPS plans to switch her Dolmio Day from Wednesday to Thursday.

I don’t care if it’s about the changing of the all important Dolmio Day or if it’s an update on what Sofia Dolmio, aka the most iconic puppet in Italy, is up to. If Fake Showbiz News tweets the word Dolmio, it’s funny.

Cat Deeley says you know the expression ‘throwing someone under the bus’? Well that’s what she’d like to do with Snow Patrol – but for real! pic.twitter.com/WWxOkXDeeo

Cat Deeley reveals her intense dislike of Snow Patrol is the main reason she has spent the past 15 years living and working in the US.

“I just had to get away from them,” she said pic.twitter.com/jfd7ayHcKm

One of the most prolific sagas is Cat Deeley’s endless FICTIONAL hate for Snow Patrol. Fake Cat Deeley really wants that band to be erased off the face of the earth and it’s hysterical.

Richard Hammond being unnerved by gays

Richard Hammond says he imagines the rule of six and the warm weather means gay men will be having all sorts of lewd garden fun this evening pic.twitter.com/YwXuRucMZC

Richard Hammond says it annoys him that gay men can just stroll around swimming pool changing rooms looking at all the willies.

“I make sure mine is never out for long,” he told reporters pic.twitter.com/eJjeSOOHn8

Richard Hammond says he’s proud to report there’s nothing in his record collection that could even remotely be described as a “gay anthem” pic.twitter.com/9vy0RBmNuK

It’s an exaggerated saga, but one that is based on truth. Richard Hammond came under fire for saying in reference to eating a chocolate Magnum: “It’s all right, I don’t eat ice cream. It’s something to do with being straight.”

Adrian Chiles says he isn’t completely sure what ‘hot mess’ means but he thinks he might be a hot mess pic.twitter.com/NKiPa90fWM

Adrian Chiles reveals he’s thinking of writing a book about some of his wildest sexcapades pic.twitter.com/UoaFwx3ltI

A gross one but a good one.

Jessie J announces 15 redundancies at her abattoir in Hampshire.

Jessie J reveals she’s ordered some “truly horrendous” machinery from Russia that she hopes will generate record-breaking profits for her abattoir pic.twitter.com/kgOHaPq7j8

“We pay minimum wage but there’s no toilet,” she warned pic.twitter.com/gThaTo3AbN

This one is so absurd but so golden. Jessie J and an abattoir chain are two things that just have no right working in such perfect harmony. Fictional Jessie J being a tyrannical CEO of a pig slaughtering empire is so visceral and evil – always a laugh from me!

Emma Bunton says if you’re ever in New York you should go and check out the Statue of Liberty pic.twitter.com/Z6h0y12KVO

Emma Bunton says whoever invented the kettle was an absolute genius.

“I use mine most days,” she told reporters pic.twitter.com/fFIRiBib1F

Emma Bunton says it breaks her heart to see ‘vanilla’ used as a derogatory term.

“It’s a wonderful flavour and we’re lucky to have it,” she told BBC Radio Solent pic.twitter.com/zKUPCApUp3

The depiction of fictional Emma Bunton as that really boring mate of your mum’s that you bump into in the supermarket and have to listen to their crap small talk is too real.

*insert literally anything* VS. Predator

‘Inbetweeners vs Predator’ to hit cinemas on 23 June pic.twitter.com/kscqluDLwC

‘The Royle Family vs Predator’ to hit cinemas and streaming servces on 18 December pic.twitter.com/McHA4EV7fk

Release date of ‘Girl With A Pearl Earring vs Predator’ delayed to October due to coronavirus pic.twitter.com/BZEOCWpTrI

Jokes aside, I’d literally pay to see all of these.

Olly Murs being a bit thick

Olly Murs admits he has no idea what his pronouns are pic.twitter.com/9lDmuB0xI2

Simple but efficient comedy. No shade to Fake Olly, but these don’t feel too far fetched really.

Kylie Minogue says it fucks her off when cunts don’t move out of her way when she’s spinning around pic.twitter.com/bjN3SUTIJh

Kylie Minogue says she can already tell today’s going to be dreadful pic.twitter.com/LaZcwIEzLN

Kylie Minogue calls for the return of public hangings.

“It would send out a strong message and would also be fun to watch,” she said pic.twitter.com/iCQ8F1nv49

These are so funny because real Kylie is an absolute angel on earth – a ray of sunshine and a national treasure. Fake Showbiz News Kylie is a borderline sadist.

Rochelle Humes tells Marvin he needs to do more round the house. He says he’ll start by drinking lots of beer to make more space in the fridge but she tells him it isn’t a laughing matter pic.twitter.com/6ulJa71HaF

Rochelle Humes says it’s a good job Marvin isn’t in charge of looking after the Pfizer Covid vaccine as he’s left their freezer door open overnight TWICE in the past two weeks.

Marvin says it only happened because she was rushing him to do other stuff pic.twitter.com/VoRfuTpgOm

Rochelle Humes asks Marvin if he’s phoned the plumber yet about the problem with their en-suite but he says he hasn’t had time.

Rochelle says well that’s interesting seeing as he found time to make some changes to his fantasy football team and order some fancy beers online pic.twitter.com/aayvCjhWds

Marvin Humes reveals Rochelle is annoyed with him this morning because he was browsing his phone while she slept last night and a video started autoplaying really loudly and woke her up.

“I’m in the doghouse again,” he sighed pic.twitter.com/0Jah7Zki4i

Rochelle Humes tells Marvin he’s not rinsing the plates enough before putting them in the dishwasher.

He mutters to himself it’s starting to feel more like a dictatorship than a marriage pic.twitter.com/5cSRPgCzJx

Rochelle Humes asks Marvin if he washed his hands after handling raw meat and he says yes of course he did.

She says what hand soap did you use then and he says the bubble gum flavour one but she says well that’s funny as it ran out three days ago pic.twitter.com/75tKwqTpFO

Poor, poor, poor fake Marvin and fake Rochelle Humes. In real life, they have one of the happiest marriages in showbiz.

In Fake Showbiz News land, all is not well. But GOD, it’s comedy gold.

• They’re all over your TikTok, so finish the lyrics of all these Olivia Rodrigo bangers

• Students shouldn’t have gone back to uni in September, says Dominic Cummings