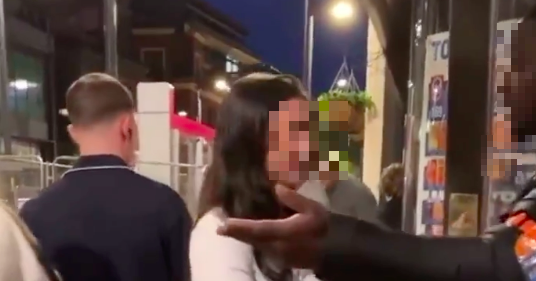 Police have arrested a 24-year-old woman after a video of a Wetherspoon bouncer being called the n-word and spat at went viral.

Footage of the rant, where a woman on a night out in Birmingham pushes a black security guard, spits at him, and calls him a “black cunt”, surfaced after it was shared by the security guard.

The security guard, who works at the Figure of Eight Wetherspoon on Birmingham’s Broad Street, said the incident “is something I, or anyone who looks like me shouldn’t have to go through.”

A spokesperson for West Midlands Police confirmed a woman had been arrested after attending a police station: “We’ve arrested a woman on suspicion of racially abusing a pub doorman in Birmingham city centre on Saturday night (22 May).

“The woman was detained at 1pm today after she attended a police station at our request.

“It’s alleged the 24-year-old, from Worcester, used racist language towards the member of security staff outside the Figure of Eight in Broad Street at some time between 10pm and 11.30pm.

“She’s also accused of racially abusing another man who was stood near the pub entrance and earlier damaging furniture inside the premises.

“She remains in police custody for questioning.”

Officers added that they were trying to get in contact with the victim of the incident.