To those who keep dressing like Peaky Blinders, you are not Tommy Shelby

This is peak hatfishing

Every time I log onto Facebook there's another group of guys trying to look like extras from Peaky Blinders, wearing flat caps, tweed waistcoats and lace up chelsea boots, standing with their legs unnecessarily wide apart.

I mean, it beats grubby five panels and purple leavers hoodies. Peaky Blinder boys look mature, like they have issues, they might say things like: "you don't want to get close to me". And everyone knows issues are hot. Especially when it is Tommy Shelby sat topless in bed, smoking a crack pipe.

Interestingly, it's not just uni students trying to look like a character from the BBC period drama, Brooklyn Beckham has been donning the look and so has David Cameron. Although he looks less like a gangster and more like a closed cup mushroom you'd buy from Tesco:

Then there is this absolute donny 8-year-old from Birmingham who was sent home from school for his Tommy Shelby haircut. "I don't want it to knock him what has happened, I don't want it to affect his learning" said his concerned mother after the incident.

These Peaky Blinder boys are not hard to miss. They walk in slow-motion, their arms rigidly held by their sides, chewing tooth picks, forever raising one eyebrow and smirking their lips to one side.

They drink ale and even though they have never been in a fight they are thirsty for the moment someone spills their mates drink so they can square up to them. But there won't be razor blades in their hat seam, more like a Topman label.

They always have rusty tins for their fags and clipper lighters. They take long indulgent drags, and smoke right down to the filter, huffing through about 30 a day. 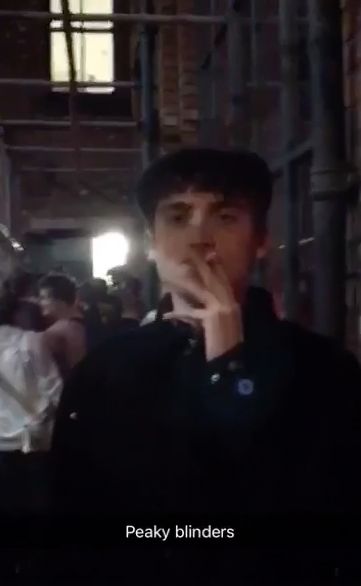 They love going gambling but they are not fixing horse races, more like putting on William Hill accys on the new phone app. They might look quite sophisticated wearing a waistcoat inside a nightclub, but watch out for sweat seeping through the fabric. They would take the tweed off but all they're wearing underneath is a white school shirt from M&S.

Peaky Blinders boys pretend the pocket watch they have started wearing ironic, but really they make a conscious effort to check it over their IPhone.

These guys might look the part (ish) but don't expect them to have a hot, breathy Brummy accent. They will never say shit like: "BY ORDUH OF THU PEAKY FOOKIN BLOINDERS", or "ROIIIGHHHT!" In fact, they've probably never been to Birmingham. If they did they'd be surprised to find cobbled streets aren't a thing and the city centre largely consists of several Nandos and a massive Primark.

Objectively Cillian Murphy's trim is a bad haircut, one part promotor, one part bowl cut from your mum. He only gets away with it because of his glorious cheekbones. And guys keep tagging their selfies #peakyblinderhaircut, even though it just looks like they got a short back and sides with a bad fade. It's the sort of thing you'd complain to Tony and Guy HQ about.

If you dream about snogging Tommy Shelby, preferably with blood dribbling down his jaw or a black eye or something which indicates how fucked up and mysterious he is. Then head to the centre of town of any city in the UK and you can find your own version, be it the Essentials range.

Went to a fancy dress party. We all loved it thanks pic.twitter.com/bxAc0Xchls