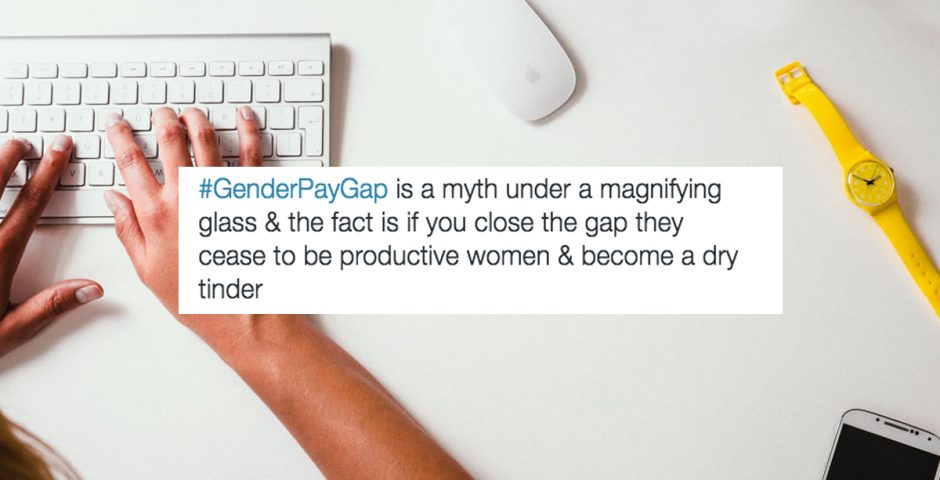 I literally hate the internet

Women will not earn the same as men for another generation, according to new research from PWC.

The company found that the gender pay gap is not predicted to close until 2041, and predictably the news has divided Twitter. PWC’s Women in Work report found that while “opportunities for women in the workplace have rapidly improved in the UK since 2000”, Britain still trails behind other economically developed countries in terms of equal opportunities.

Financial services was the industry with the largest gender pay gap – 34 per cent – while the report also found that women were more likely to work in industries which don’t pay well. Women currently make up 70 per cent of health and social work jobs, and 60 per cent of jobs in education.

Yong Jing Teow, an economist at PwC, said: “It’s positive news that women in the UK have benefitted from the improving economy and there are now more women in work than ever before, but we still have a way to go. By fully closing the gender pay gap we could boost women’s earnings by £85 billion, which is an average of £6,100 per woman per year. It’s not just about getting more women working, but also about getting more of them into high quality jobs that offer career progression and flexibility.”

Based on the historical trends they identified, the company predicts that the pay gap won’t close entirely in the UK for another 24 years. While for a lot of people, regardless of their gender, that’s pretty depressing news, some of the idiots and meninists on Twitter today are living for it and still maintaining it does not exist. Here are the best of their worst comments, just in case you wanted to get in touch with them or something. You do you.

Are they still spouting the #GenderPayGap bullshit?

i swear there's only a pay gape in wages but in earnings.
well, i consider it a complete myth.

The #GenderPayGap is a vicious myth which promotes cultural Marxism.

It's a fucking myth! Let it fucking drop for fucks sake #GenderPayGap

#genderpaygap is a myth. Men work harder fields, more overtime, and take less leave overall. It's only different in earned income, not rates

haha lets ignore the data and reputable economists so we can perpetuate the myth that the pay gap actually exists :^) #genderpaygap

#genderpaygap is a myth, doesn't exist in western world.
£/h same for both genders. Career £££ disparity due to lifestyle choices. Fact.

The #genderpaygap is still a feminist myth. How many more times do we have to go over this?

LADIES! The day u cease being a bitter cunt about EVERYTHING, youll INSTANTLY notice the myth of the #GenderPayGap dissipating. I promise

YAWN!!!!! The #genderpaygap is nothing but a feminist myth

The #genderpaygap the myth that will never, ever Bloody die. It should have been buried decades ago.