The Women Don’t Owe You Pretty author has been accused of profiting from ‘black ideas, black activism and black work’

If you are in any way a follower of Instagram feminism, then you’re probably familiar with political activist Florence Given, and her debut book, Women Don’t Owe You Pretty. The feminist self-help book aims to provide an accessible entry point into progressive feminism for people of all ages and genders.

Florence Given faced criticism this week after her book was accused of being incredibly similar to What A Time To Be Alone, a 2018 self-help book by Chidera Eggerue, better known as The Slumflower on Instagram.

The Slumflower has come forward about the similarities between the books, arguing that Florence Given acknowledges the black women who inspired her book but hasn’t used any of the wealth generated to give back to the black community.

An Instagram user posted a five minute IGTV broadcast, where they explained they were “scared” to talk about the book, as they knew “how many people love that book”.

They said: “It’s really, really similar. A lot of the ideas, a lot of the phrases. It’s all there. A lot of it is copied or reworded.”

The video goes on to point out the primary difference between the two books: Florence addresses “queerness” in a chapter titled ‘Maybe it’s a girl crush, maybe you’re queer’, whereas The Slumflower does not cover that.

“We need to have a conversation about white people profiting off of black people’s ideas, black activism, black work. They don’t give money to that black person, that black person is not paid. In this case, The Slumflower wasn’t paid, approached about donating a portion of the profits to a charity of her choice”, they said.

“You cannot call it feminism if you’re not crediting black women and you’re not paying them. If your feminism doesn’t uplift the most marginalised groups within society then it’s not feminism. I know so many people love this book, and I really hope it’s helped you, but I hope you can look at it from my perspective and The Slumflower’s perspective. It’s not okay.”

What has The Slumflower said about Women Don’t Owe You Pretty?

In a series of Instagram stories that have since been deleted, The Slumflower shared her own thoughts on the controversy, claiming Florence’s new book “wouldn’t exist” without her own works What A Time To Be Alone and How To Get Over A Boy. The Slumflower also said they “look like the same book” and could easily be mistaken.

A quote from The Slumflower can also be seen on the cover of Women Don’t Owe You Pretty, calling Florence “an absolute powerhouse”. She has since revealed in a thread of tweets that she provided the front cover endorsement before seeing the “published product”. She also wrote that Florence is “aware” of her feelings.

Hey, for clarity I gave Floss' book a front cover endorsement quote before I saw the published product. We have spoken and she's aware of my feelings towards her book looking and sounding a lot like my already published works. I do wish her the best and hope we can use this-

In her Instagram stories, The Slumflower filmed the acknowledgements page of Women Don’t Owe You Pretty, in which Florence thanks “the voices of marginalised people” for helping her “understanding of prettiness, desirability, privilege, unconscious bias and systems of oppression”.

Florence goes on to write: “I had to listen and I had to learn, predominantly from black women. My understanding of these topics would not have been possible without the work of the following women, who I am dedicating this book to.”

The Slumflower read out the names of nine black women listed, including herself, explaining “donations to black charities” could have been made for these women, and merely acknowledging them is “performative”. 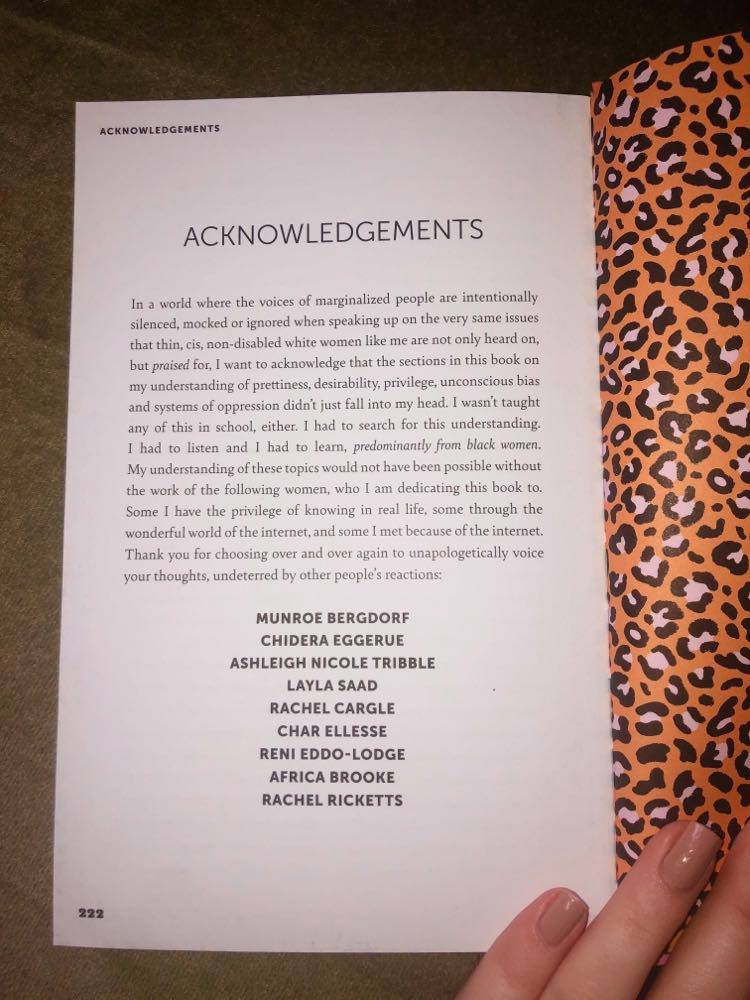 The Slumflower proceeded to point out the “white supremacy” behind Google’s algorithm. In a series of screenshots of Google searches for ‘Chidera Eggerue feminist book’, Women Don’t Owe You Pretty appeared alongside The Slumflower’s own works.

The Slumflower captioned these screenshots: “Remember that Google’s algorithm is designed to show you what your own bias wants to see. So depending on your location, browsing data and internet usage habits, your search results may slightly differ but there is still something to be said in algorithmic bias and white supremacy. 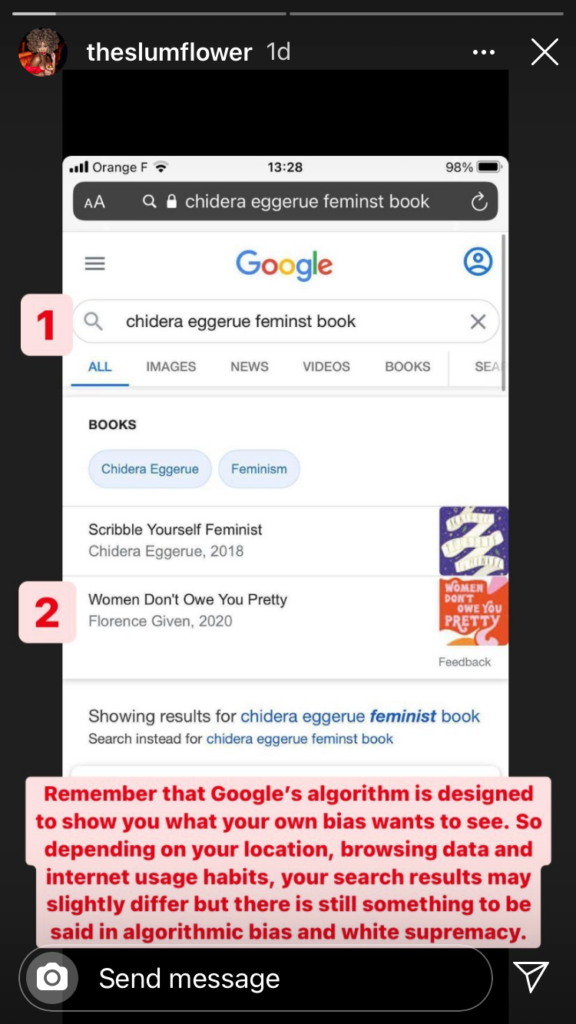 “These Google search screenshots are sending me, proves my point that everybody (especially black people) needs to stop being satisfied with representation. Our visibility is often a tool to boost white people’s capital. Even when things appear to be wholesome. Reparations > representation.”

In another screenshot that has since been deleted, The Slumflower suggested Florence write her “a fat cheque” because her name was helping boost sales, as Women Don’t Owe You Pretty appeared in all of her searches.

The Slumflower urged viewers not to bully or harass Florence or her social media pages. She said the situation was rectifiable, and that Florence should make amends by donating to charities that help Black communities. 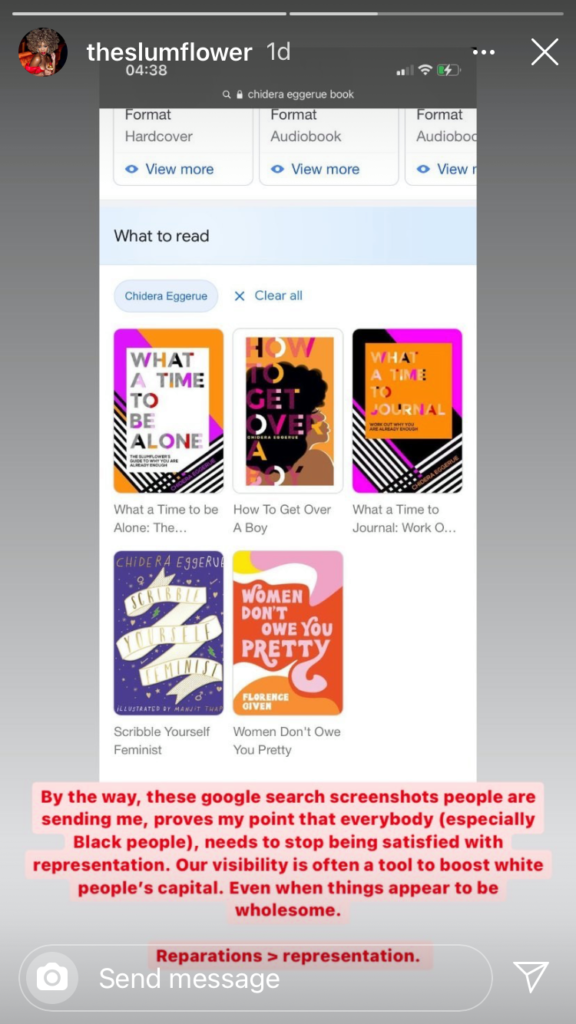 Florence Given has not commented on the videos, nor has she posted on any of her social media pages.

The Slumflower and Florence Given are both under the same management team, Diving Bell, committed to “representing a new breed of changemakers and innovators”.

The group represents four black women and four white women, all of whom are influencers with a feminist message.

The Slumflower and Florence Given have frequently been paired together for press pieces and have been each others guest speakers before. One Twitter user, Moya Lothian-Mclean, tweeted about this, including screenshots proving the pair’s history.

She said: “Of course Florence Given’s book uses the same design etc as The Slumflower’s because both of them are positioned as 101 feminist entry points for Gen Z and publishing houses love to beat a bestselling design or schtick into the ground. These two keep getting packaged together.”

Related stories recommended by the author: