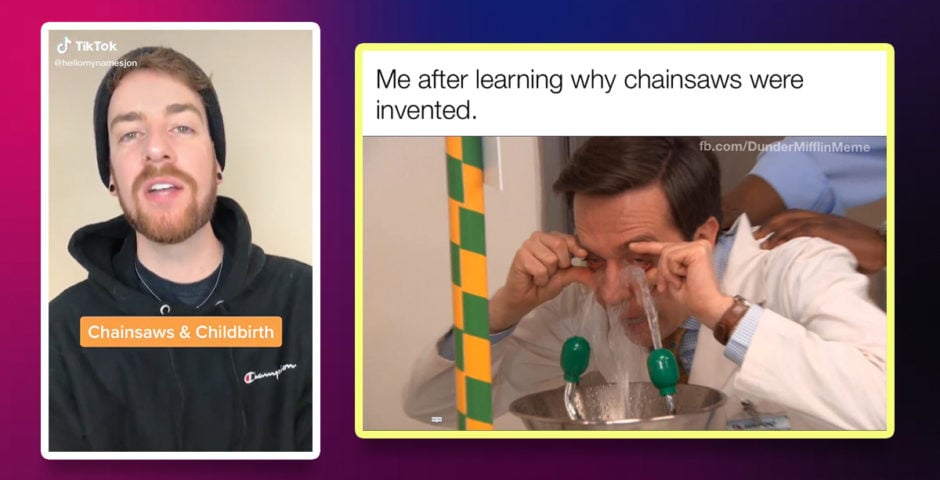 The world is a sick, sick place

Today in things the internet made you find out and now you can’t unknow, is the simple question: why were chainsaws invented? You may think this is quite simple, maybe someone wanted a sharp object to cut down a tree? Maybe a builder created it? Something innocent surely? Oh, no. It is dark.

A meme is going viral of people reacting to when they find out why chainsaws really were invented and a video on TikTok has claimed chainsaws were originally invented to help with childbirth. So if you’ve found yourself here because you want to know the answer, you’re about to find out.

So then, why were chainsaws invented?

You might want to sit down for this, because chainsaws were literally invented to cut through bone during childbirth. The prototype of the chainsaw familiar today in the timber industry was pioneered in the late 18th century by two Scottish doctors, John Aitken and James Jeffray. They invented it for a procedure called a symphysiotomy and excision of diseased bone respectively.

This procedure was used during childbirth, before the days of C-sections, when babies were too large or breech, so they could be delivered naturally. Originally, a small knife would be used to remove bits of bone and cartilage around the pelvis to make more room for the baby, but this was found to be way too messy and take a long time.

So in the 1780s, the two doctors invented the chainsaw – to make this procedure easier. The chainsaws back then were a lot smaller, but it’s been said the operations took place without anaesthetic. Yes, the chainsaw would literally cut human bone to make it easier to give birth. Honestly, I feel sick.

For more of the best TikTok videos, trends and memes – follow The Holy Church of TikTok on Facebook.

• Ok so who is Bunny the talking TikTok dog and can she actually talk?