Protests have been and will continue to take place across the world in the coming week, in light of the death of George Floyd. The issue of police brutality towards black people has been a huge issue of injustice not just in America but in the UK as well. The incident has sparked uproar across the world and since the George Floyd petition has become the most signed petition in history.

Yesterday across London, Cardiff and Manchester people to took to the streets to join the Black Lives Matter movement grieving the loss of all those who have died from police brutality. Whilst the protests have sparked much controversy with many believing they are unnecessary and dangerous due to the current COVID crisis, we spoke to people involved in the organisation and attendance of the protest and why it is important people still take to the streets.

For those uncertain on how to protest safely, we have collated advice and measures put out by various organisations so that you can attend putting as little risk as possible to yourself and others.

Dress appropriately (for safety and practicality)

What does this mean? Wear masks, gloves, non-identifiable, close-fitting clothing and sensible shoes, as advised by BLM Yorkshire. The measures set out are for both practical and safeguarding reasons. The London protest yesterday involved over four miles of walking, so be practical with your footwear. Likewise, masks and gloves are in an attempt to protect people from contracting or spreading the virus whilst on protest. BLM UK is advising people to wear non-identifiable clothing to protect their identities and safety.

We spoke to Tianna who made sure to wear black and use a face-covering during the protest. She told The Tab: “Everyone I saw yesterday at the protest was wearing a face covering and people were trying their best to stay safe.”

TODAY I MARCH , TODAY I PROTEST , TODAY I SHOUT , TODAY I INFORM, TODAY I FIGHT!! Today I stand up for my black brothers and sisters who have lost their lives to a lost cause to a social and periodical injustice to a generational curse no longer will we be silent NO MORE! #justice #freedom #justiceforgeorgefloyd #justiceforahmaud #justiceforbellymujinga #blacklivesmatter #antiracism #problack #blacklove

Organisers do not want people breaking the two metre guidelines that were put in place by the government, therefore they were imploring people to stay two metres apart from other protesters for safety reasons, so make sure you do so to keep yourself safe and out of custody. Yesterday seven arrests were made because people were not obeying social distancing.

They do recognise that especially during large city protests it can be impossible to maintain social distancing because of the sheer quantity of people attending the marches. Please attempt to do so as much as possible.

Bring sanitiser and use it often

Protest leaders and organisers are being supplied with hand sanitisers and antibacterial wipes, if you are offered some, use it. It is being handed out to participants throughout the day, so utilise it. Likewise if you have your own sanitisers, take them with you.

Before you take a sign from someone else, make sure that you are either wearing gloves or that it has been sanitised before it was handed to you to prevent the spread of the virus.

Make sure you know your rights

@ldnblm, a group of advisors separate from the protest organisers, have been trying to keep those participating informed of their rights with five messages:

They have also been advising all those participating in the protest to be aware of the protest support line on 07946541511. For more information on protestor rights check out their Instagram account.

Choose what to take and what not to take carefully

This tweet outlines all the things protesters should and shouldn’t take for their safety. Protests went on for over four hours yesterday and so organisers are keen for those involved to stay hydrated and safe. They also do not want people putting themselves at risk, hence why they have given strict guidelines on what not to bring.

• Anything you don’t want to be arrested with

Make sure to disable Face/Touch ID and notifications on your phone for safety.

Do what’s best for you and stay safe

If you feel unwell, consider yourself to be vulnerable or have any kind of respiratory condition  do not go to the protest. Organisers and protesters alike want everyone to stay as safe as possible stating: “It should be a choice and how you feel towards the cause. You MUST do what makes you as an individual feel safe.”

Quarantine for 14 days after protesting

If you do decide to attend any protests this week, you need to isolate for 14 days after doing so to prevent the spread of the virus. This way the risk of infection is lowered and enables more people to safely attend future protests.

This advice is being given by all major UK BLM networks to those going out and protesting, however, they respect the wishes of individual protesters who may believe the cause is more important.

If you don’t feel safe attending protests, know that you can digitally protest

Many from the BLM movement are imploring people to stay at home and stay safe and to find new ways of protesting. Much of this comes through acting on social media. Whilst performative activism and Instagram chains are also facing a lot of backlash, there are lots of constructive ways to support online through resources such as those attached here.

Likewise, students have been protesting to their universities directly for change. We spoke to UCL student Afiya Amesu who is involved in the address to the academic institutions who are remaining silent on the matter.

She said: “In times such as these, we are reminded of the racial disparities that continue to exist in society. We witness the contradictions of the ugliness that exists in humanity, that sits alongside the beauty of a united people, rallying for change. Now, more than ever we must stand together, not divided because of colour or creed, but supporting those who remain oppressed.

“With their collective resource and influence, universities have the opportunity to make that stand by supporting their black students and acknowledging their fears and concerns. Amidst racial tensions and the COVID crisis, black students must be able to find reassurance in the efforts of university institutions, in recognising their struggle. Being ‘non-racist’ is no longer sufficient- an ‘anti-racist’ stance must be adopted.” 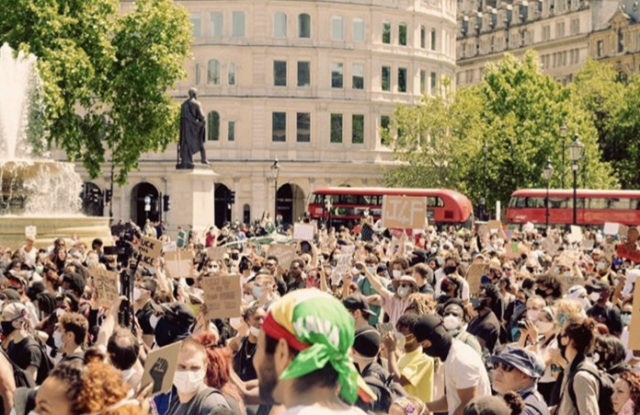 Thank you to everyone who spoke to us about keeping protesters safe.