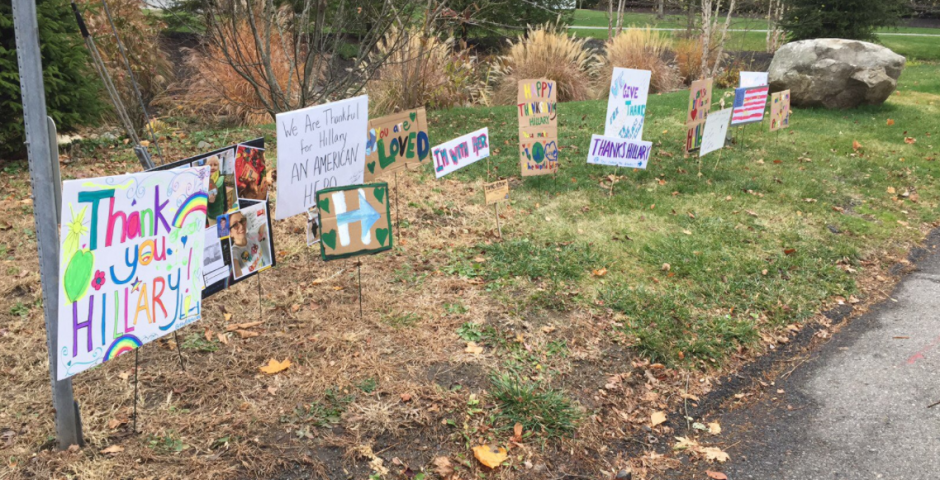 If it’s been a tough year for us collectively, it’s been an even tougher one for Hillary Clinton, who was forced to see her life’s work ruined by a giant orange cunt with tiny hands. But it’s not all bad in the world, and if you need a reminder of that, here is one:

I was greeted by this heartwarming display on the corner of my street today. Thank you to all of you who did this. Happy Thanksgiving. -H pic.twitter.com/b69mW3Oqbf

Hillary today tweeted a smattering of supportive messages from people who still believe that maybe – just maybe – the person with a 2 million lead in the popular vote might have made a better president than Trump. Among the handmade placards are “we are thankful for Hillary AN AMERICAN HERO”, and “loved”.

After tweeting the picture Hillary had a deluge of support on Twitter, with one person writing: “I don’t know you but I love you. You still made history.”

Another supporter tweeted: “You are an incredible woman, role model and human. Happy Thanksgiving to you and your entire family.”

So if you’re currently stuck at home with family who voted wrong and gritting your teeth through political discussions remember it’s not all bad. There are still good things in the world. This is one of them.