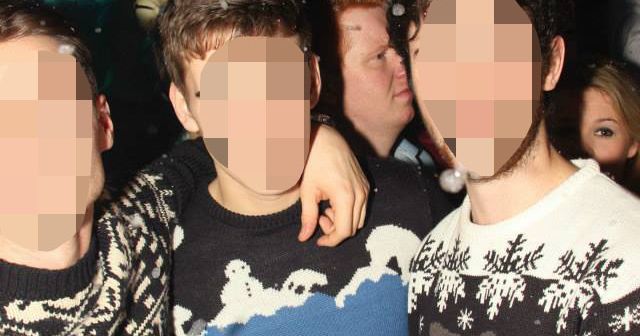 You wouldn’t sing the N-word

Take a look at this six-year-old clip from Text Santa. In it, Gary Barlow, Nicole Scherzinger, Tulisa Contostavlos, and Dawn French are singing the best Christmas song not recorded by Mariah Carey – "Fairytale of New York". The clip reeks of 2012: Post-sex-tape Tulisa is fed up of it all, Nicole is trying too hard, and Gary is just sitting there with his classic shit-eating smirk the whole time.

Nostalgia aside, the main draw of the clip is Dawn, who concedes that she can’t sing, but does want the chance to belt the iconic line from the second verse – “you scumbag, you maggot, you cheap lousy faggot. Happy Christmas your arse, I pray God it’s our last”. She really wants to sing the line – like, a little too much – and when she misses it, Gary replays a section of the song so that the line comes as a climactic finish. It’s played off as a spontaneous bit of comedy, but you’d be forgiven for thinking it had all been meticulously planned.

More importantly – the scene of a packed crowd cheering on a straight woman for successfully uttering a homophobic slur is fucking bullshit.

do straight people realise that we don’t care if fairy tale of new york is still played in nightclubs or on the radio, we just don’t want you to say one word. that is it. one word out of three hundred and one words. you still have three hundred others to say. it’s not difficult.

It’s a scene not unlike what you’ll see in any bar nearing closing time in December. The Pogues (fronted by Shane MacGowan and featuring Kirsty McColl) track is laser-targeted towards heaving crowds of pre-Christmas drinks; reuniting with old friends, getting with new ones, celebrating how much of a mess you are amidst the crystalline perfection of Christmas adverts, dazzling decorations, and idyllic family life. People love the “faggot” line. Like Dawn, they gear up to sing it to their mate in an endearing “you’re a bit of a state, but I love you” kind of way.

"All I Want for Christmas Is You" notwithstanding, Fairytale of New York slaps to the extent that it’s the only Christmas song you actually want to hear on a night out. That blend of Christmassy wholesomeness and drunken slurring ensures it will always appeal to tragic student pub crawls, and guarantees it’ll straddle Radio 1 and 2 for the rest of time. The “faggot” line is predictably censored on radio, but that won’t stop straight people singing it at the top of their lungs when it comes on in the pub. Only when you take a step back does something seem off with that picture in 2018.

Earlier this year, reports of a group of students singing the N-word to “Freaky Friday" at pres caused such controversy that Piers Morgan weighed in to defend them, which, if your woke-ometer is functioning properly, means they’d for sure fucked up. The clip has since been removed for "violating YouTube's Terms of Service", presumably because YouTube wants to discourage non-black people from singing racial slurs.

Why then, despite Kirsty McColl not being gay, is Fairytale of New York, a song in which a straight woman tosses out a homophobic slur, still on YouTube? Groups of straight people never get called out for singing “faggot” in Fairytale of New York when they're out in public, and that's not because it's uncommon.

One Twitter user has even suggested an alternate line you could sing, and he's not the first to start picking up on it. That being said, Twitter has always been ahead of the woke curve when it comes to nostalgic things being problematic – even Christmas songs – so it might be a fair while before Piers Morgan inevitably defends his right to call people faggots.

straight person:
you scumbag
you maggot
you cheap lousy-

Like the N-word, “faggot” has been dryly repurposed by the LGBT community as a term of endearment. This sort of thing depends on those not in that community nixing the word from their own vocabulary. Eminem has doubled back on his once frequent use of it, there's a scene in Glee where Kurt's Dad kicks off at Finn for using it, all of which paint a progressive picture. But Dawn French begging to sing it doesn't fit into the picture so well.

No there’s a huge write up complaining about Fairy Tale of New York and the use of the word faggot. I won’t stand for it, ITS A SONG written in fucking 1987. STOP CRYING

For some, "faggot" is just another weapon turned against homophobes, a way to way to snigger at "the straights" being bone-headed and ignorant. But for others it will always evoke very specific memories of being bullied either online or in real life, or having to listen to their mates band it about as an insult. For certain members of the LGBT community, that one word might have screwed over their entire coming out process. Regardless, whether your gay mate gets annoyed over you singing it to him at 1am isn't up to you, but whether or not you chose to sing it is.

This Christmas, give yourself the gift of not being an arsehole: When Fairytale of New York plays on your next night out, just don't sing one word of it. That's all – one word, two syllables. Not too much of a stretch, right?

• Dear Freshers, please don’t sing the N-word in the club

• A definitive ranking of the best, and most heart wrenching Christmas adverts 2018