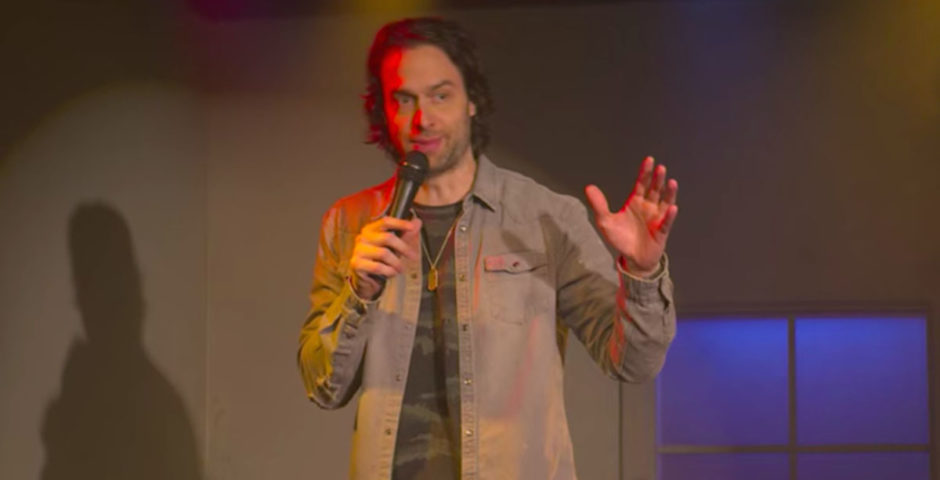 He allegedly asked a number of girls for photos

Chris D’Elia, who played Henderson in Netflix’s You season two, has been accused by multiple people as being a “groomer” of underage girls and sexual misconduct.

On Tuesday, a Twitter user, Simoné Rossi, posted a photo of screenshots of her alleged interactions with Chris D’Elia. In the messages D’Elia appears to ask her for photos and suggests they meet up to make out.

Chris has denied “knowingly pursuing underage girls”. In a statement to TMZ Chris said: “I know I have said and done things that might have offended people during my career, but I have never knowingly pursued any underage women at any point.

“All of my relationships have been both legal and consensual and I have never met or exchanged any inappropriate photos with the people who have tweeted about me.

“That being said, I really am truly sorry. I was a dumb guy who ABSOLUTELY let myself get caught up in my lifestyle. That’s MY fault. I own it. I’ve been reflecting on this for some time now and I promise I will continue to do better.”

In the screenshots of the interactions dated 11th July 2014, Chris appears to ask for a picture, though it is not clear what of. Simoné sends a picture of a panda the following day. Chris allegedly replies: “Hahah the fuckin panda. Dick.”

Simoné then replies: “They’re very exotic.” Simoné captioned the series of pics: “Imagine getting owned by a 16-year-old”. It is not clear whether Simoneé had communicated her age in the messages. 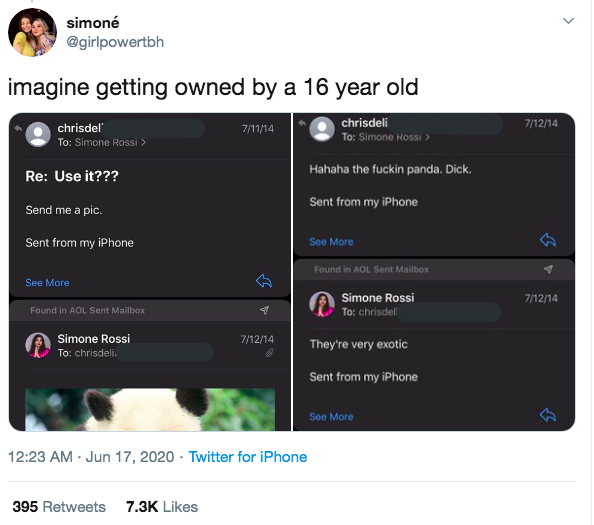 She then posted another picture which was captioned: “Imagine being 16 and being groomed by a stand up comedian twice your age and the only reason you never met up and never got physically m*lested was because you had just gotten a boyfriend your own age.”

In the picture she posted of the interactions dated 1st January 2015, Chris appears to ask her if she wants to hang out. Simoné replies with: “Do you wanna meet up tonight?”

Chris allegedly replies with: “Yesss can we make out?”

imagine being 16 and being groomed by a stand up comedian twice ur age and the only reason you never met up and never got physically m*lested was because u had just gotten a boyfriend ur own age pic.twitter.com/xq7XDrat8i

Since Simoné’s claims have come out many other Twitter users have claimed they have had similar experiences with D’Elia. One user wrote on Twitter that Chris D’Elia allegedly “solicited nudes from minors” and “tried to fuck [her] friend when we were 16.”

The anonymous Twitter account SheRatesDogs shared a number of DMs they had received from other girls who alleged to have similar stories.

One of messages sent into the account claimed Chris tried to “hook up” with a 17-year-old and their friend. 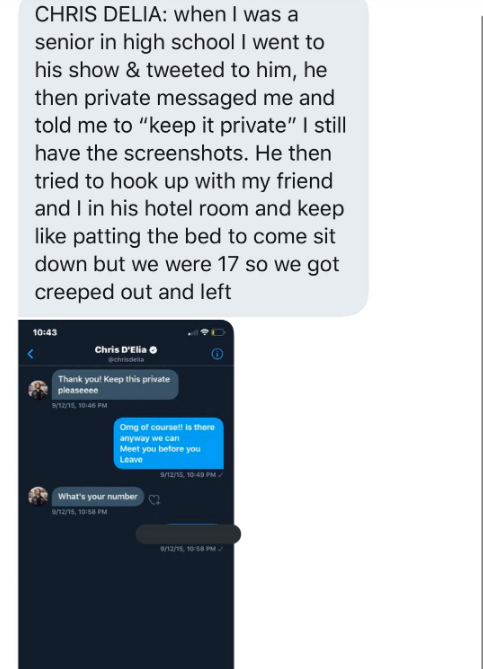 The anonymous message also included a screenshot of a DM which appeared to be sent from Chris D’Elia’s official Instagram account which asked the recipient to “Keep this private” before asking for their phone number. US states vary in their age of consent and it is therefore not known if the individual was a minor. It is also not clear if the individual communicated her age to Chris D’Elia.

The comedian Emma Arnold also took to Twitter. She claimed one of Chris D’Elia’s best friends warned Emma not to send D’Elia nudes as he allegedly memes them to show other comedians.

She said: “When I was a brand new comic, one of Delia’s best friends warned me to never send Chris nudes bc he made them into memes and showed to other male comics at shows. Looks like some of those memes were probably of underage girls. No wonder I don’t miss comedy yet.”

On You season two Chris played Henderson, a pedophile who is accidentally killed by Joe.

The Tab has contacted Chris D’Elia’s representatives and Netflix for comment.

•Netflix has officially confirmed You season 3 is in the works

•The 11 wildest yet most believable theories about You season three