Wonder if she calls anyone an idiot sandwich

Oxford Brookes is well known for enrolling children born to the rich and famous, such as Gary Lineker's son Tobias. But as classic as the Linekers, there's another legendary British family who are on the scene: the Ramseys.

Gordon Ramsay's daughter Megan Ramsey is a student at Brookes. The 20-year-old is in her second year of a Psychology degree and has over 124,000 followers on Instagram, which is quite something.

Of course having Gordon Ramsay as your dad gives you quite the following, but she also has been on TV herself, alongside her siblings, and travelled the world cooking and getting to visit some super cool places. She also looks a right laugh to be at uni with.

Here's everything you need to know about Megan:

She's one of four Ramsay kids, with 18-year-old twins Jack and Holly, and 16-year-old sister Tilly

They've all starred on a CBBC show together, and Jack looks exactly like his dad – it's freaking me out a little bit.

She's the daughter of Gordon Ramsey, the Hell's Kitchen chef who swears a lot and calls people "idiot sandwich", the babe

Happy birthday to this gorgeous lady have a great day darling. Love you daddy xxxx @megan__ramsay

Megan is a second year at Oxford Brookes, and can be found out in Ox clubs like Anuba

Megan is doing her degree in Psychology 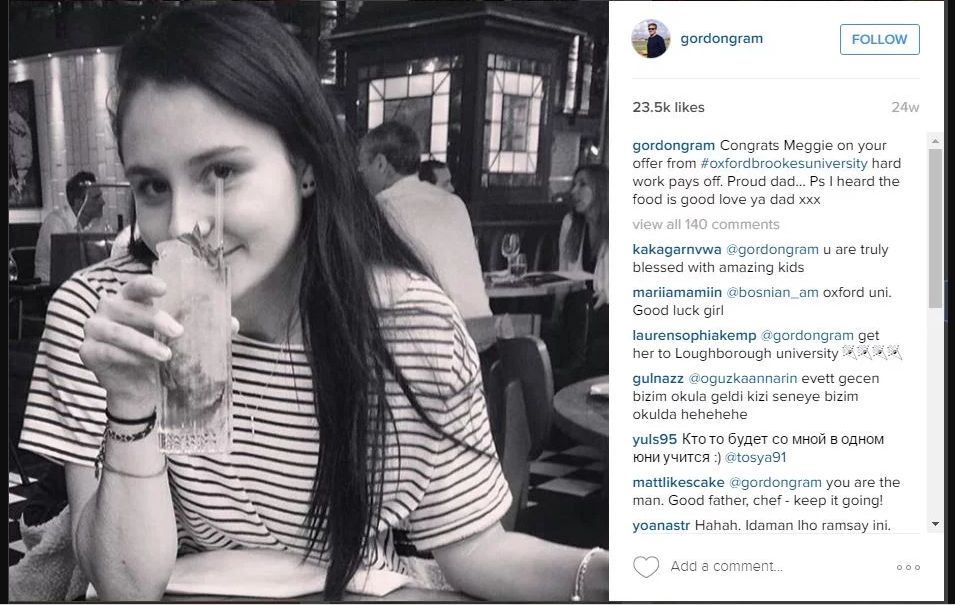 With this average-looking house in LA, Megan splits her time between there and the UK

Your neighbours get aggy about you playing music, hers are Stevie Wonder and Kim and Kanye.

Christmas Eve with my fav ???

Christmas 2018 by the beach anyone?

However she admits she's not great at skiing…

But Megan is way, way better than you at fancy dress

Whether it's pub golf or a Gatsby themed party she's got the lewk, making your "binbag and a weak pun" effort look embarrassing.

Just off to play golf ??

A little party never killed nobody ???

Celebrating it early with the fivesome ??❤️

Throwing it back ??❤️

Don't tell me you don't think they were the cutest kids ever.

Whilst Gordon and Becks are best mates, the chef has said his kids aren't allowed to date the Beckham kids.

Although they're not allowed to date, they are good mates. Birthday posts for Brooklyn were a regular fixture on Megan's Insta, but she didn't do a birthday post for him this year, so who knows ?

Also she posted THIS and we can definitely all relate