Pour one out for Flume’s publicist

Let’s cut to the chase here: Flume ate ass on-stage at Burning Man. It is probably the most iconic three seconds of film recorded in 2019. If you haven’t seen it, it’s on The Tab’s Instagram story.

Few things are better than the video of Flume eating ass, including actually eating ass, but one thing that is better is the memes about it.

We’ve rounded up the 41 best memes and reactions to Flume eating a whole ass and if you don’t find at least one of them funny your sex life is probably really vanilla, soz.

I see what you did there

2. The Flume eating ass memes are probably great for business 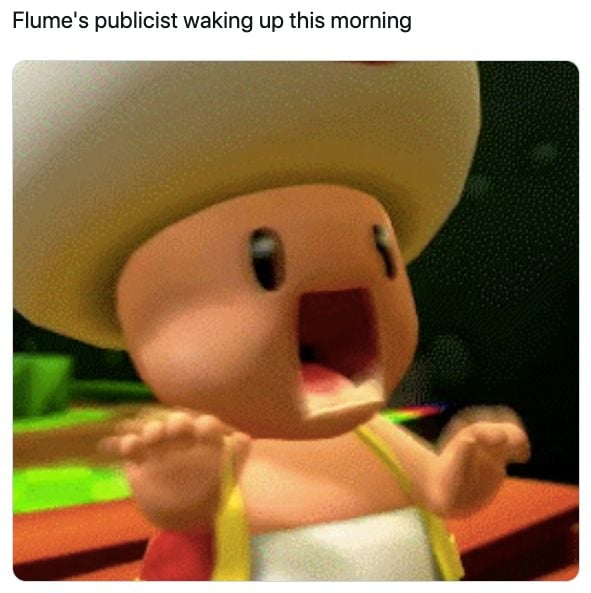 3. Why is no one talking about this?

Honestly tho, Flume didn’t even “eat” ass. That was the equivalent of Squidward trying a Krabby Patty for the first time ?? pic.twitter.com/9KpBdipVp5

5. Honestly you have to envy his confidence

6. I mean weird flex but okay

7. The most well microwaved takes here ladies and gents

I dunno what all the fuss is about, everyone has had their tongues up flume’s ass for years ??‍♂️

10. You should see what they get up to at Reading

11. Just look at those exclamation marks

Y'all impressed with Flume eating ass at Burning Man?

Just wait until I suck my own dick at EDC!!!

Flume is an artistic genius. From making instant classics in 2012, to making a whole new genre called future bass, and to his final form of playing insane music while eating ass in front of thousands of people. This man isn’t human, he’s far more complex than that

15. The music festival thing is an important distinction to make

16. Peak times when you’re not Flume

so when Flume eats ass on stage it's cool but when I do I'm asked to leave the Petersham Bowling Club???

17. Yes and I’m living for Flume eating ass memes so thanks

It's Flume's world we're just living it in it.

18. Have you ever considered Flume is a pioneer for eating ass

flume: a pioneer and visionary music producer who helped bring catchy yet hard hitting, experimental electronic music to the masses

Flume waking up to see what all the fuss is about pic.twitter.com/cKZ6QdyUWo

23. I want to know the stories behind this

24. Don’t bring cats into this please

25. I am in desperate need of Flume energy

Ladies if your man isn’t putting out like Flume, leave him. You deserve Flume energy

26. In all honesty this is the best meme

Cackling thinking about Flume’s mother getting on the phone and sternly saying ‘Flume,’

In honor of flume, we will be eating ass today. I mean listening to flume all day today.

Hi, This Is Flume pic.twitter.com/Xbr19SU5rZ

Every chick at Burning Man looking for Flume like…. pic.twitter.com/fIl7nQ0iwF