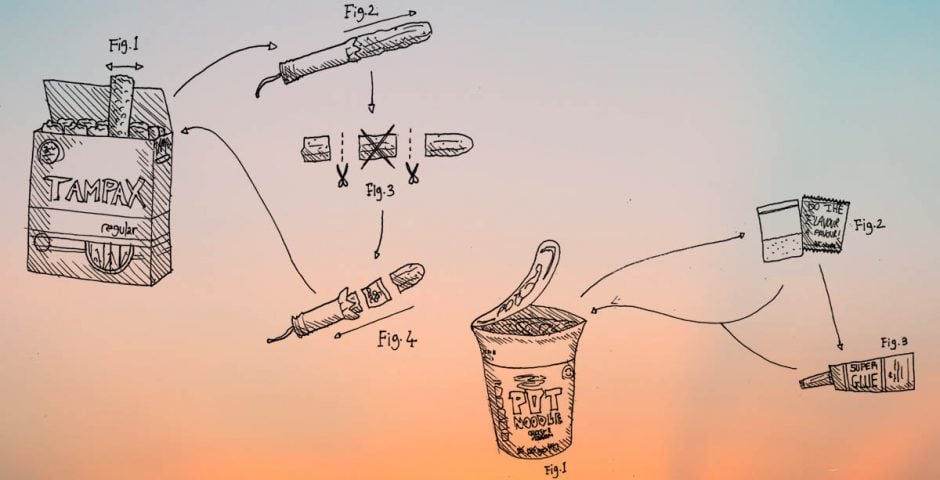 We asked festivalgoers for their tried-and-tested smuggling methods

Summer’s here. Secret Garden Party, Glastonbury, Bestival or Reading and Leeds. It’s a time where festival stereotypes are fulfilled so hard they really need no further analogies. But the feds aren’t too keen on that happening (thanks, Tim Farron). So you’re posed with a question. How do I get drugs into a festival? 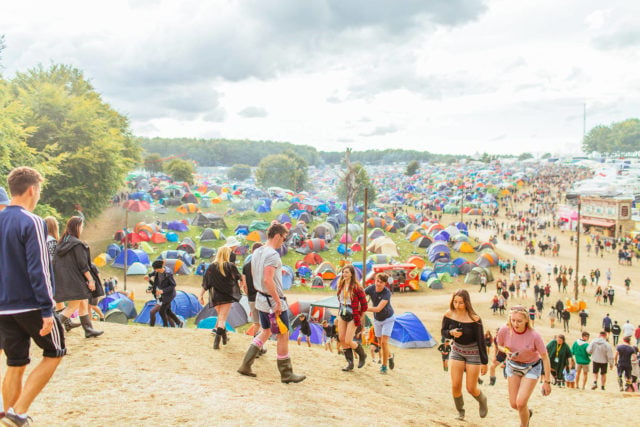 How to get drugs into a festival

We asked self-proclaimed proseshionals their preferred smuggling methods – here’s what they had to say. 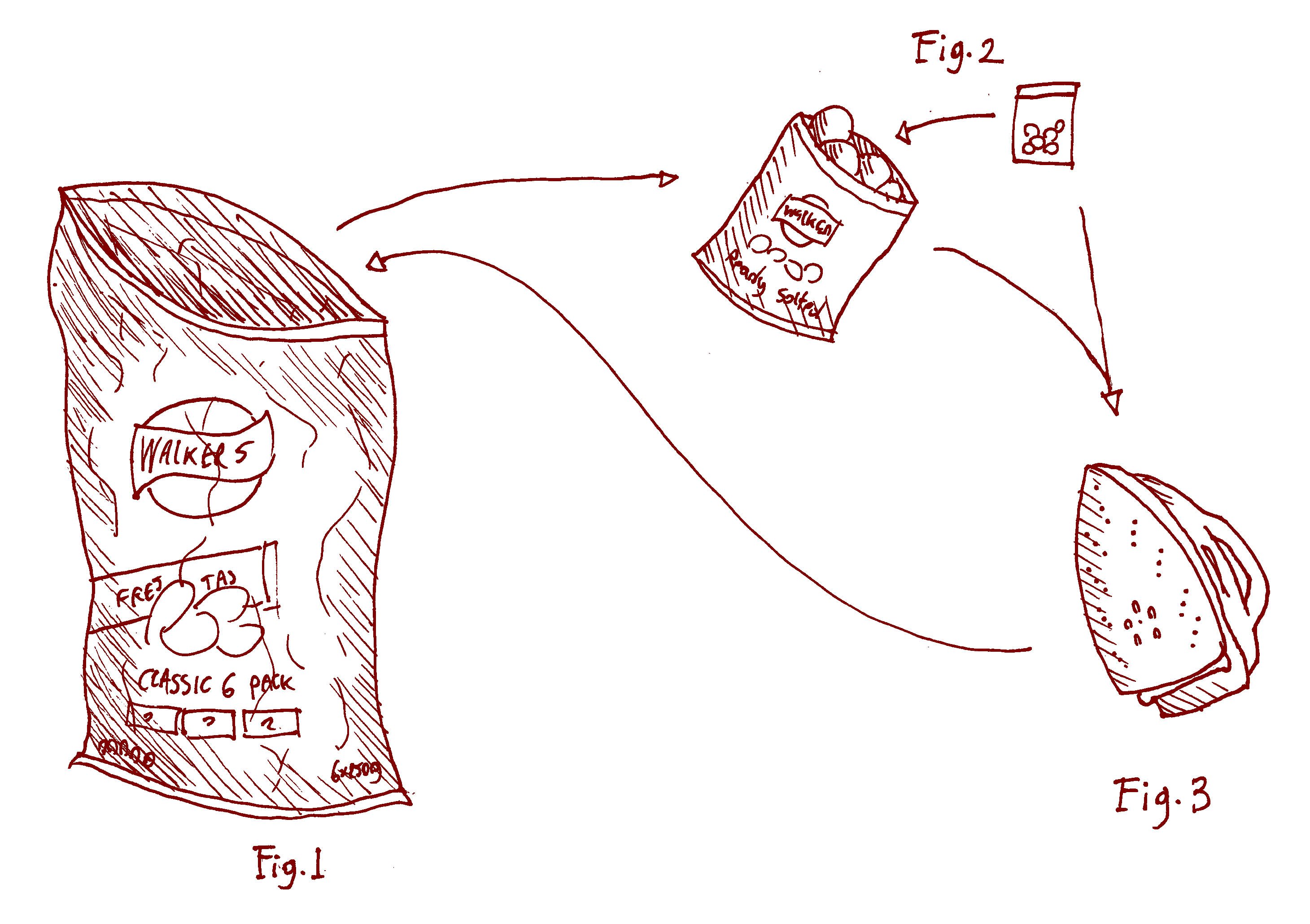 “My tried and tested method for getting naughty shit into festivals. Get yourself a multipack of crisps and open it up (Fig. 1), open one of the individual bags and put all of your contraband in one of the crisp packets (Fig. 2). Iron it shut and do it on a low heat so the fumes don’t get to you (Fig. 3). Voilà you’ve got a discrete yet tasty snack waiting for you once you get inside.”

“The Cadbury’s Brunch bar. Surgically open the packet and take a bar from its wrapper. Eat it. Now construct a hollow fake bar. You literally need double sided tape and a sheet of cardboard. A primary school child could do it, a well-drilled production line can really churn them out. Fill, reseal, back in box, seal box. Done.”

“Yeah I’ve been searched with that set up, that rig. They shook the box and were none the wiser.” – Dale: Bestival, Boomtown, Glastonbury, Secret Garden Party, Latitude 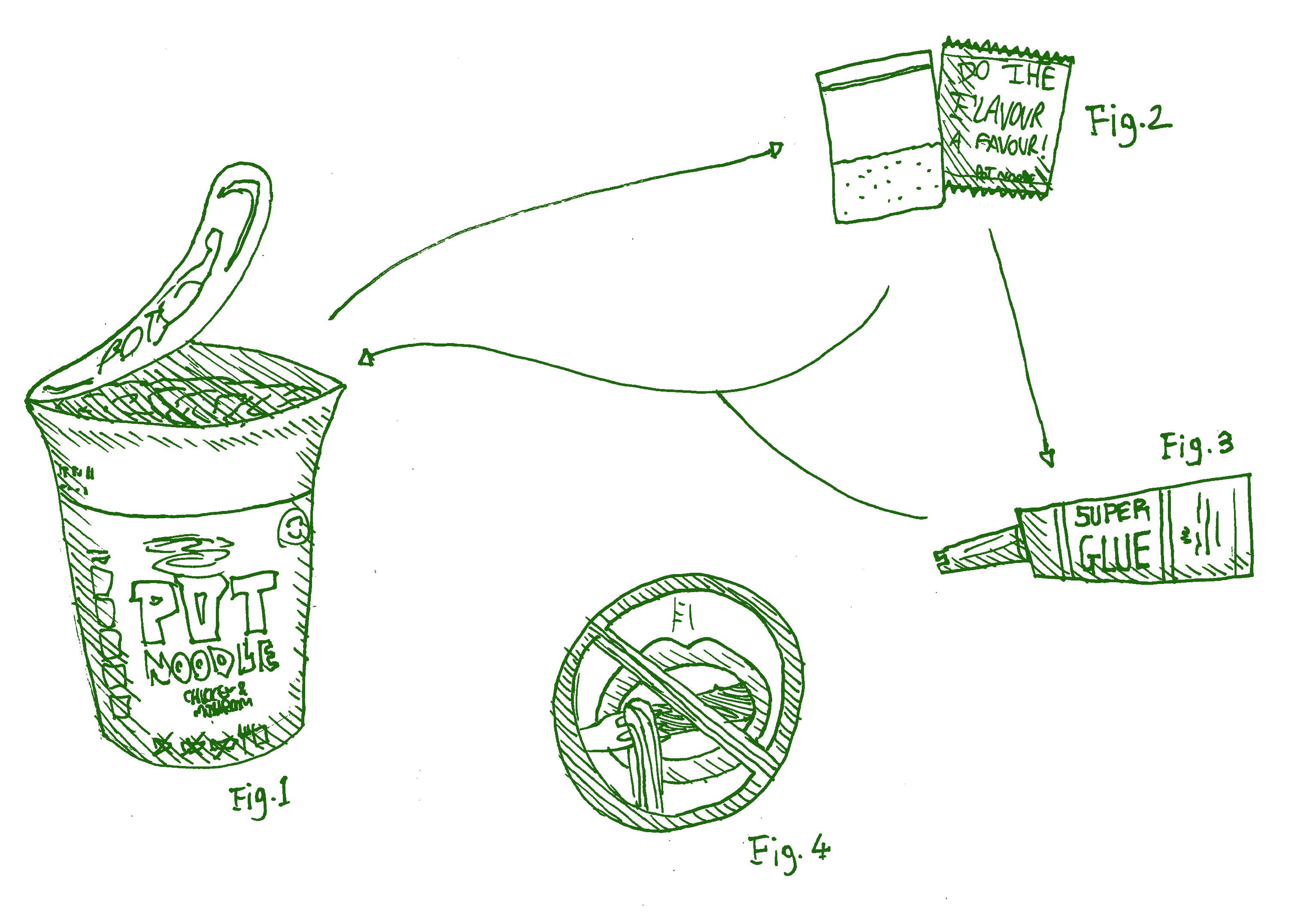 “Get your flav of choice and very carefully open the foil lid just enough to fit your baggie in (Fig. 1). You have to make sure not to break the foil otherwise you wont be able to close the lid again properly and it’ll look bait. Once your drugs are snug alongside the soy sauce/tommy k packet, reseal the lid with some super glue to make it look like an unopened pot (Fig. 3). Do not eat the drugs stash noodles after (Fig. 4). It will taste like super glue. Which isn’t nice.”

“My bag was searched at Reading once but all they did was take my fork off me because they said it was a weapon, but not at Glasto or Bestival.” – Charlotte: Bestival, Glastonbury, Isle of Wight, Latitude, Reading 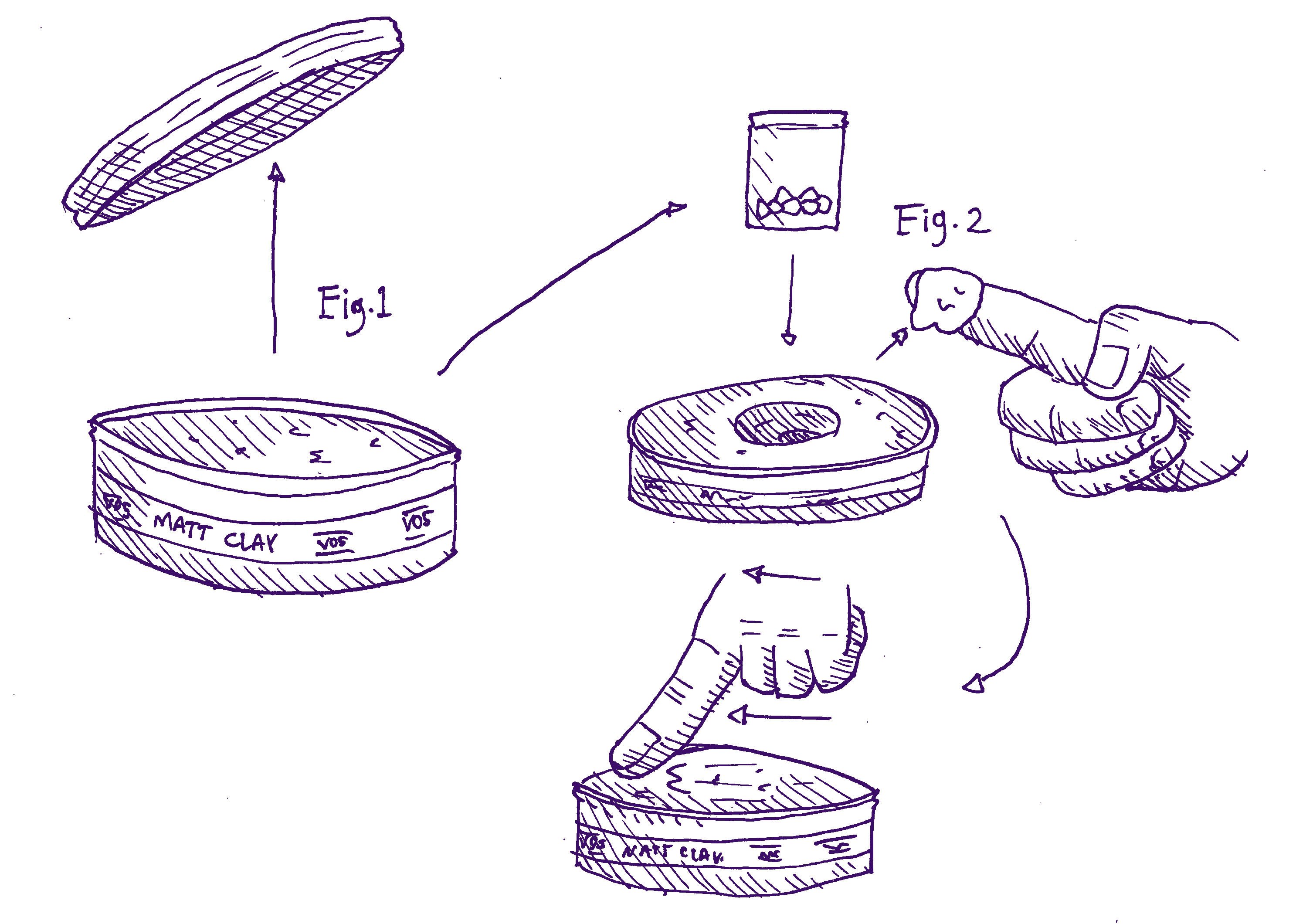 “Take your standard tub of hair wax, dig a hole in it, put the wrapped up drugs into the hole and smooth over (Fig. 2). You wrap them in cling film, that way your drug don’t taste of VO5. It’s only in there for, like, an hour.”

“Get yourself a cheap bottle of roll-on deodorant but not too cheap so it looks suspicious – ‘mum’ deodorant, for example, is too conspicuous. Using a tea spoon, scoop the roller ball out of the bottle. Using lots of water, rinse the bottle out, but leave a very small amount of liquid in the ball, so that when you put it back in, it looks like there’s some deodorant left and the smell masks what’s inside.

“Dry the inside of the bottle thoroughly, and place your drugs inside. Make sure they’re in baggies, cling film and foil to prevent any liquid damage. Place the roller-ball back in the bottle, and ensure the liquid residue is facing the outwards. Be sure to take a teaspoon with you, to scoop the roller-ball back out when you get there. It can be placed in a toiletries bag or at the bottom of your sleeping bag if you’re extra paranoid.” 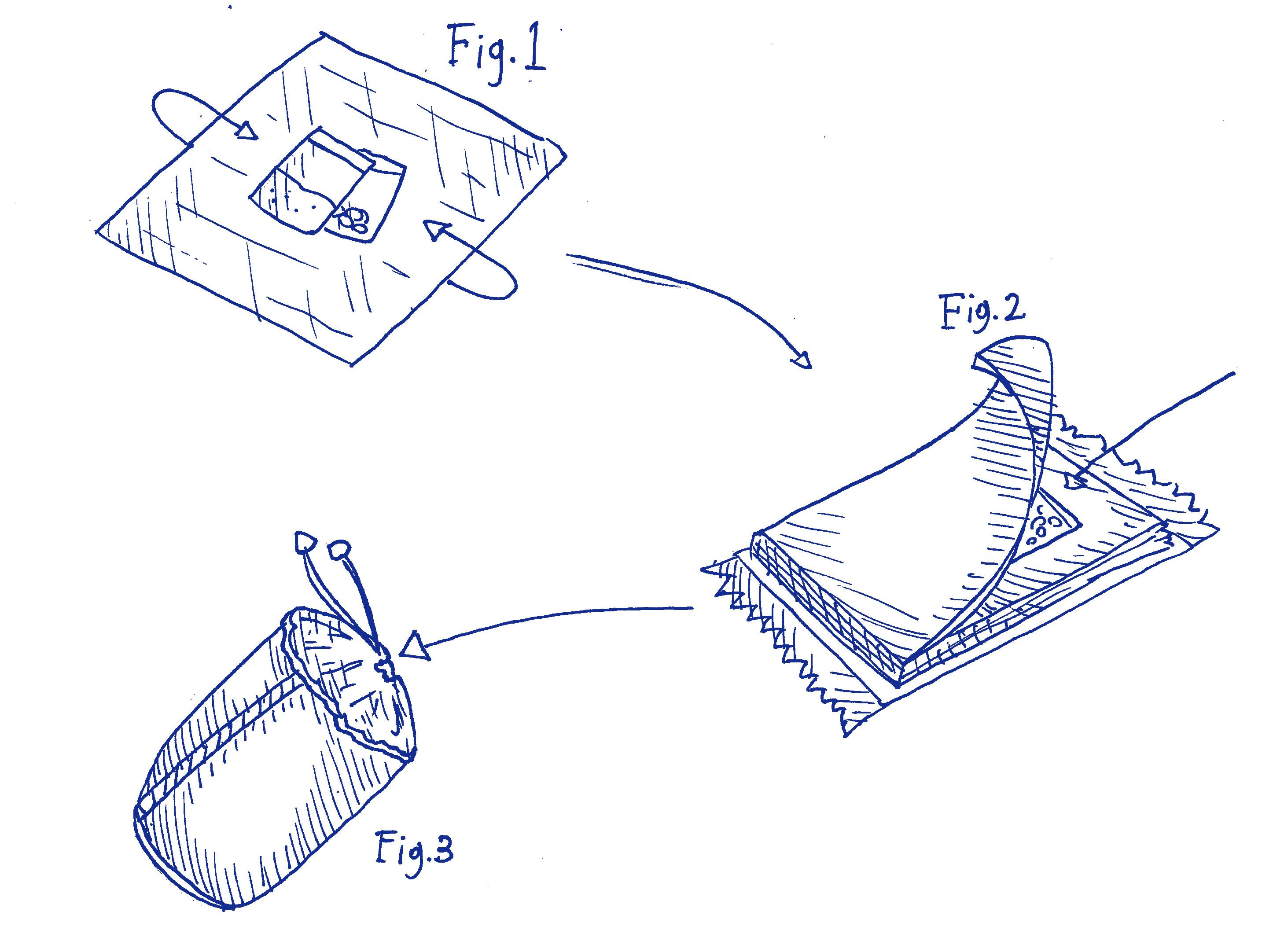 “This method is fairly flawless. First get your baggies together, I’d recommend pills on the inside of any powder so the shape is pretty rounded and flat. Get some cling film and lay it out in a square. Place the collection of baggies in the centre at one end and fold the sides inwards, then roll the baggies to the other end of the square – now you have a relatively airtight sealing around your baggies (Fig. 1).

“This doesn’t wholly prevent the smell. So get a pack of wet wipes and make sure they’re relatively resealable. Take half of the wet wipes out, place your package inside, and reinsert the wet wipes (Fig. 2). Reseal the pack.

“Now get your wet wipes, and put them at the bottom of your sleeping bag (Fig. 3). Roll this up, and use the side straps to keep it small. Put it at the halfway point of your bag – most camping rucksacks have a bottom compartment you can seal off. This keeps it high enough off the ground to avoid sniffer dogs but low enough that security won’t bother getting it out to inspect.” 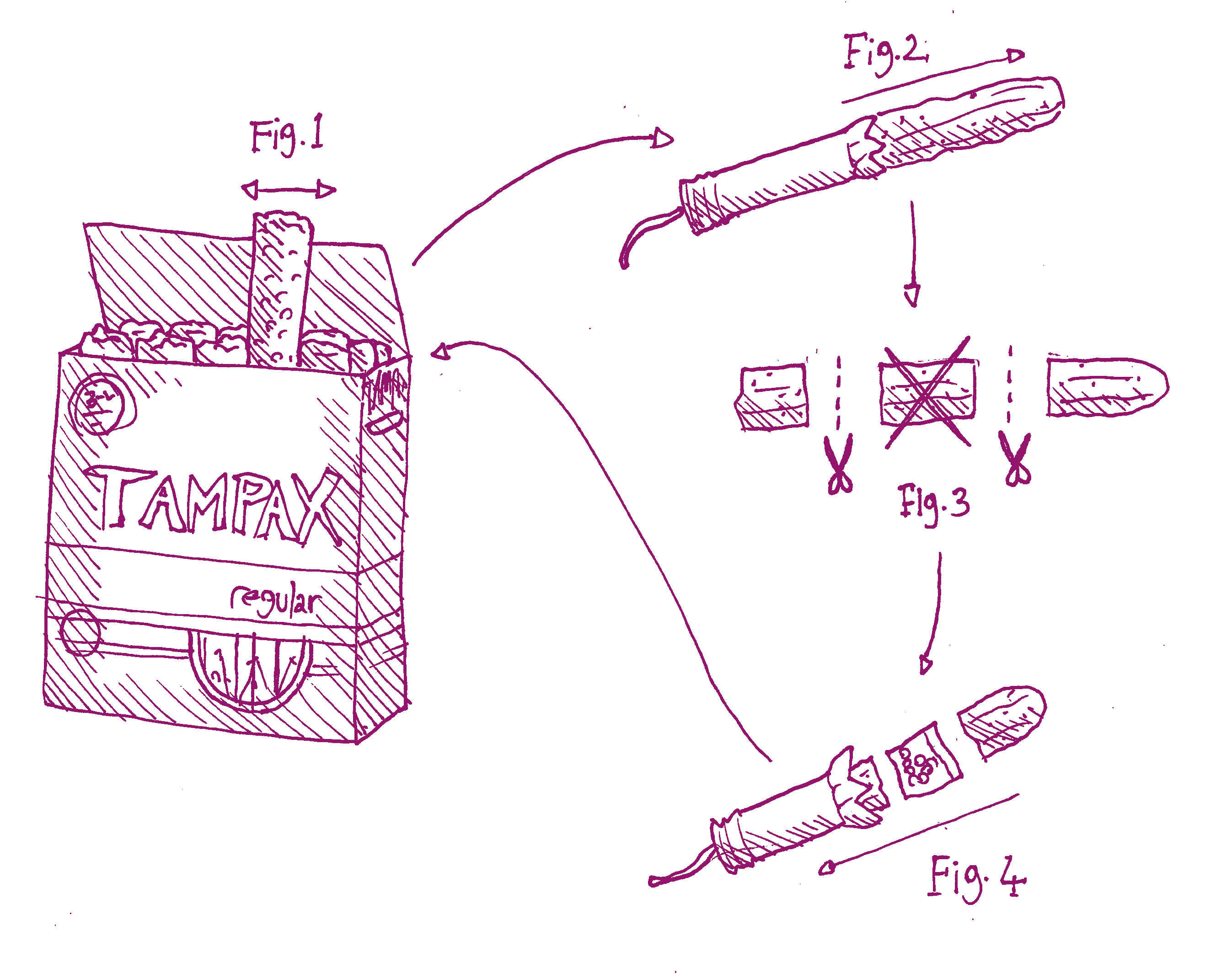 “Grab a box of tampons and neatly pull the wrapper of one open (Fig. 1). Push the cotton out of the tubing and cut it into three (Fig. 3). Discard the middle section and fill it with the pills, reinserting the tip of the tampon (Fig. 4). Put it all back in, roll the paper together and replace it into the box. Carrying tampons around the site is also wholly acceptable so it had a two-fold benefit.”

“Old but gold, use a stash lighter to get stuff in. I’ve got three. They don’t light, they have a flint but no gas. Not that anyone checks. It just works, if you’re pantsing stuff I think they will clock and putting stuff really deep in your tent is something everyone does. It’s just a different method and they cost like two quid.”

“Have big boobs and wear a bralette. Put your drugs in there. They never suspect it. Or tack onto someone. At Bestival we walked next to someone who we knew had weed and the dog went for him. It was tactical, we didn’t know him. I don’t use a baggy but a small tin. I just stick it in there and my boobs cover the awkward shape of it.”

“Put a load of drugs in the end of a condom and put it on. Walk into the festival.”

“Get other people to do it for you. That is genuinely my underhand and slightly horrible technique of shifting any risk of arrest to my friends. You can usually get banging stuff inside alternatively, but at day festivals it’s all chalk or concrete pills.”

“At Exit. My brother had a strip search at Bestival which was pretty funny as well. Lost about £500 of gear for the whole group because they found it in a pack of baby wipes. Then they made him get naked and squat a few times to see if anything came out his bum.  Genuine truth.

“He can’t go to America. Only didn’t get arrested because they couldn’t ID a few of the different things. That’s why I don’t take anything in myself.” – Ciaran: Bestival, Exit, Glastonbury, Secret Garden Party

More articles by this author – 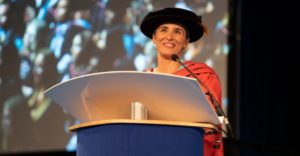 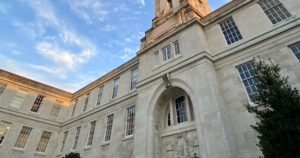