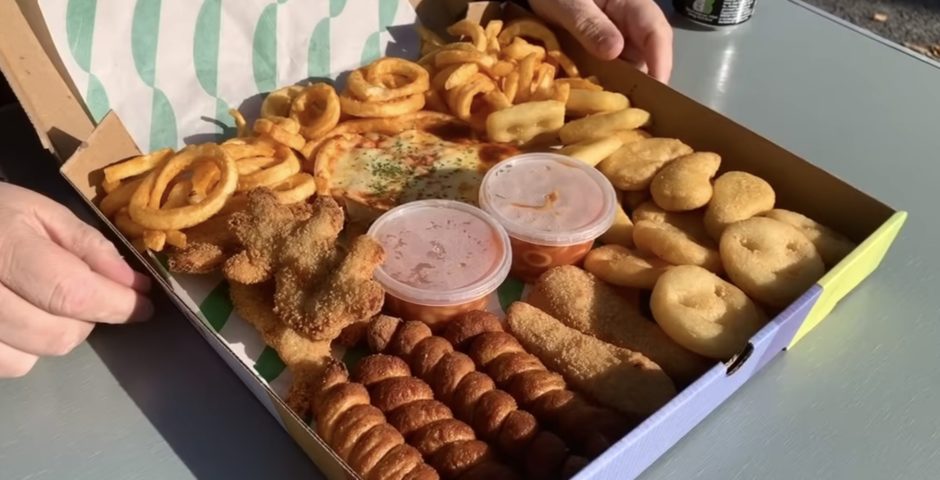 British tapas: Every iconic delicacy reviewed and rated out of 10

The epitome of fine dining

Anyone who can say with their chest that British people have no culture has clearly never scranned a big plate of British tapas, and it shows.

British tapas might not be much, but it’s ours. A pile of beige fresh from a freezer, garnished only with the delicate tangy flavourings of Heinz bean juice. That’s bliss.

Everyone’s British tapas platter seems to vary from plate to plate, with some maniacs including sweet stuff in the mix and some others putting a load of nachos with unmelted cheese on. You’ve got to take the tapas rough with the tapas tumble, but which British tapas component reigns supreme?

We scored each classic British scran out of 10. Fight us, if you wish.

Alright, cut the shit. Nobody is this happy all the time.

The smiles are pleasant at first, quite an endearing sight to see before you munch. But after a while, it just feels false. To improve the potato smilies, they should rebrand as a facial expression more relatable to the masses after a year where mustering a smile felt harder than my A Levels.

They taste banging though, can’t knock that.

Breadcrumbed or battered, the truth of the matter is that these are a massive flop from the freezer.

Limp onion, not much flavour and soggy coatings. That’s what we’re working with here, and if you think they’re going to be good you know you’re being optimistic. Save yourself the heartbreak and just wait till you’re out for tea before you get onion rings.

Not even dignifying this with a paragraph, because this has no place haunting a British tapas platter as far as I’m concerned.

The best mushed up meat on the market. A staple.

It isn’t British tapas without these lumps of chicken. They’re iconic. The little black dress of beige scran.

Depends what we’re talking. Heinz beans? A wow. Anything else? Scum of the earth.

I fucking love beans but they’re a bit breakfast-y. Beans thrive and come alive alongside bacon, sausage and eggs – not alongside a beige banquet. Wouldn’t be kicking them out of bed though.

This is what it’s all about. The moisture of the tapas.

Unlike beans that have their calling elsewhere, the humble spaghetti hoop is in its prime on the British tapas platter. It just wouldn’t be right to not have these in the mix.

Thinks it’s so fucking clever. Oooo look at me I can spell out words!

Try hard. Will never be hoops.

See, these should be better than nuggets. They’re technically better in every way. A bit like how chicken Selects at McDonalds are objectively better than chicken nuggets, when the chips are down you’d still pick nuggets no matter what.

The nugget name still means something.

WOWING. Elite. I’d fight anyone to make sure I’d be getting a piece of this British tapas gold. Pizza is from Italy, you say? I assume you, sunshine, these monstrosities have never clapped eyes on even a photograph of Italy.

But who cares? They go down smooth, even if that tomato sauce is molten lava when it comes out full of radiation. Elite.

They’ve got whimsy and flair on their side, which I respect. A quirky character on the plate. But I think turkey dinosaurs know this, and use it to their advantage. And I think that’s quite a toxic trait.

Would be eating happily, though. Once I’d finished trotting my poultry dinosaur around my plate for comedy value.

The big daddy of the tapas plate. There’s a lot of respect on the potato waffle’s name, and with good reason.

A hench king. A strong thicc boy. They take up a lot of plate space but it’s worth it.

The prawn crackers of the British tapas. Nice to have a dip and a munch on before the main event.

If you’ve got these on the go, you’re not messing about. Absolutely god tier, full of flavour and just an all round massive yes.

Fucking perfect. Splendid taste, gorgeous seasoning and curled into an entertaining shape. Doesn’t get better than this.

Potato at its best. This is what them little eggs of carbohydrates are grown for. Actually a little bit breathtaking. I’m tearing up.

• Ok babe, it’s time to find out which iconic British TV hun you are with this quiz

• How bad are you at being British?