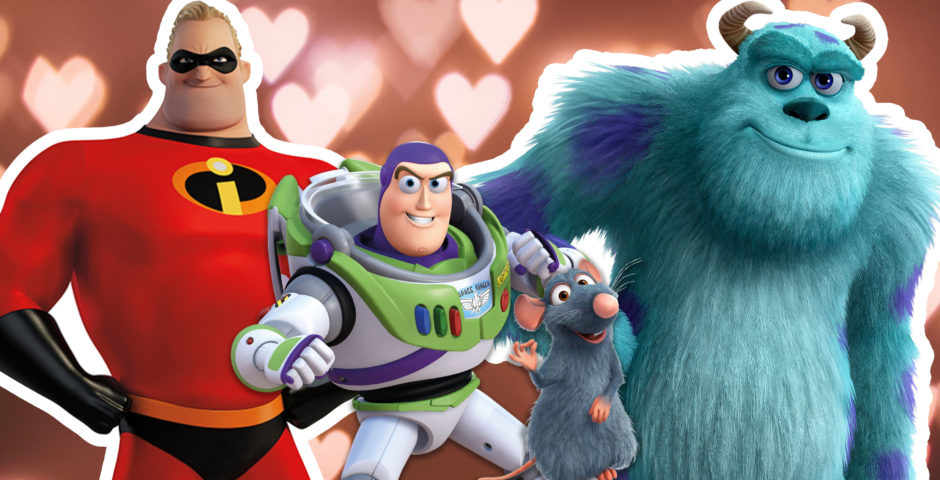 The definitive ranking of which male Pixar characters are actually fit

If you stick around to the end credits of Toy Story 2, you’ll be treated to a scene in which the villain Stinky Pete entertains two Barbie dolls in his box. Now obviously this is Pixar and it’s not like anything seriously untoward is going on, but watching the scene as an adult you’re hit with the paradigm-shifting realisation: this man fucks. As you then wade your way through the thick goop of nostalgia that is the wider Pixar oeuvre you come to understand it’s full of male characters who, to some degree or another, fuck. Mr Incredible has three kids, he fucks. Marlin had like whole pile of kids, he most definitely fucks. Don’t even get me started on Sully, who quite frankly looks like every boy I’d let ruin my life. But of all the monsters, automobiles and living toys of the Pixar universe, who is actually the fittest?

At this point I must ask that you please put down the pitchforks. Yes this is going to involve being weird about characters from Pixar films – if that’s not your thing, that’s perfectly okay. Take your non-animated-character-sexualising way of thinking to someone who cares. It’s 2020 and someone has to pluck the men from the various Pixar movies and describe what their kinks would probably be. This is the cross I have to bear.

You once got with a boy like Mater on a night out and every day since you’ve tried to expunge it from your memory. Every now and then it’ll come rushing back to you like a bullet of regret.

Most likely to: Text you the next day to say how “amazing” it was to meet you last night.

Really hard to place Mike given he’s a literal eyeball with arms and legs but at least he’s funny.

Most likely to: Cry when you reject him.

Of all the Toy Story lads, I have to say Woody fucks the least. He just sits there while his gf gets carted off to live in an antique shop or whatever and doesn’t even really care that she’s gone. He is the living embodiment of Saturdays are for the boys and is obviously a massive Tory. Big veto.

Most likely to: Make you leave immediately after sex.

Marlin would be absolutely no fun to hang out with. All he does is go on and on about his lost son. Ummm vibe kill much? You’d bring Marlin to pres and he’d be the one tutting at people for smoking indoors, or smoking at all. He sulks in the club and you have to keep excusing how much of a fun sponge he’s being. Don’t ask about his ex, by the way. It ended badly.

Most likely to: Show you baby photos on the first date.

There is actually no reason for Flick, a computer animated ant from the 90s, to be carrying around an actual dumptruck of an ass. No reason at all. However his twig-like build and poor forehead game are let-downs here. Can’t say he does it for me.

Most likely to: Have a mattress on the floor.

Sports cars are right up there with The Arctic Monkeys and murder on the list of red flag interests. Lightning here is literally a car, ergo, stay away.

Most likely to: Finish too fast (geddit?)

Anger may have limited emotional range by design, but this is true of all men so let’s not dwell on that. You’ll go to the pub together and he’ll start shouting at the football and banging the table. It’s a negative vibe.

Most likely to: Ignore foreplay.

The-rat-from-Ratatouille-who-isn’t-called-Ratatouille-because-that’s-the-name-of-a-dish-you-moron has an ace in the hole these other bozos don’t: the ability to cook. Sure there would be a height difference but a) we stan a short king and b) good food is good food. That being said, he is quite controlling and I can’t say I’m a massive fan of that.

Most likely to: Read your texts.

“The old guy from Up” might be super old during the film but when he was in his prime he possessed both a banging jawline and a fluffy head of hair. Little bit stuck in his ways, though. Very pedestrian sex.

Most likely to: Say “I love you” way too early.

Toy Story’s resident Darth Vader parody is tall. I mean, I know he’s technically like three inches, but he feels like a tall man. Also who doesn’t like a bad boy?

Most likely to: Make you call him daddy.

Randall has the energy of the slimy lad in the smoking area who bums a cig off you as part of his scheme to actually bum you – and I’m not saying that just because he is visibly slimy. This gecko-lizard-monster-thingy is just out for his own personal game and ultimately just doesn’t care about your feelings, which is hot.

Buzz’s flamenco mode is meant to show you he has the hips and the femininity to treat you right in every possible way, and you know what? Yes.

Most likely to: Bring food into the bedroom.

If Netflix existed in the Monsters Inc world, Sully would be the star of his own documentary about renewable energy and he’d be hailed as having the best dad bod in Monstropolis. Sully would be a nice boyfriend – very protective. Also, he’s good with kids and who doesn’t like that?

Most likely to: Make you breakfast in the morning.

Alfredo is honestly the boy who your stunning mate ends up with and you’re a bit like “errmmmmm excuse me?” On the surface there really are no redeeming features to Alfredo. He needs to be led by the hand (or the hair) to accomplish even the most basic of tasks, so why is your mate with him? The reason is that Alfredo is a demon in the sack. Simple as.

Most likely to: Go for rounds three through seven the next day.

I want you to look at the scene in The Incredibles where Bob grabs a lady and threatens to “crush her” like she’s a toothpick (his words, not mine). There really is no more to add here other than wow.

Most likely to: Didn’t you hear me? Watch the clip again.

Please don’t burn down my house, but I have to say this. Stinky Pete is packing. I know it and, reader, deep down you know it too. Pete here is a real man’s man; built like a brick shithouse, with a roster of side-Barbies on deck, and he has a pickaxe. Pickaxes are hot.

Most likely to: Degrade you.

I am so sorry but you’ve seen the clip where Mrs Potato head loads a veritable truckload of stuff into Mr Potato Head’s bum. This is a man whose kinks have no limits. Sure he might not be as handsome of the other toys, but he’ll be up for anything.

Most likely to: Ask you to peg the living daylights out of him.

• Quiz: How well do you remember the iconic bangers from your childhood?

• Young are people getting pushed out of summer part-time jobs

Screenshots via animationscreencaps.com. Featured image by freestocks on Unsplash.