If you’re obsessed with true crime you’re quite fucked up, let’s be honest

True crime is having a moment. Shows like Making A Murderer and podcasts such as Serial launched the genre back into the mainstream and now Netflix are now making the most of it, releasing new documentary series as quick as they can get them into your recommended section.

Abducted In Plain Sight and The Ted Bundy Tapes were huge, and even recently Channel 4's Leaving Neverland and The Disappearance of Madeleine McCann have had everyone talking, obsessed with these mysterious and harrowing real-life events. You'll watch a trailer for the latest series, sending it on to your friends, saying: "Oh my god this looks so good!" or "You HAVE to watch the new Maddie McCann doc, it's so crazy, who do you reckon did it?"

A new magazine has even been launched, at a time were fewer and fewer people are buying print magazines, showing the massive resurgence that our fascination with grisly murders and unexplainable disappearances is currently experiencing.

For those interested in true crime, you might want to buy a copy of this new mag. Looks rather sensationalist from the cover – but the features inside are carefully and sensitively written. pic.twitter.com/zkR62OUbhn

But is it not a bit weird, a bit morbid, that we obsess over gruesome killings and child abductions in the same way we would a fictional tv drama? It's not Luther, or Broadchurch, it's real people who have been the victims of these crimes who will have families deeply affected by everything that happened. But viewers do not seem to get upset by what they're watching, rather smashing through yet another chilling series about murder before salivating for the next one to be released.

Of course, it is human nature to be fascinated by murder. Like how if you pass a car crash on the motorway you can't help but look. It's human instinct to try and understand things we can't, to seek out new information to help us do this. But the over-indulgence has gone too far, here's why.

People are making 'true crime' part of their personalities

Just like people do with drinking coffee or gin, eating pizza, or dogs, people have made liking true crime documentaries part of their personality.

Go on Tinder, Bumble or Hinge and you will see people referencing it in their profiles, (just like how adult Harry Potter fans do).

So you're flicking through strangers dating profiles, and one of the few things they decide to reveal about themselves is they enjoy watching detailed examinations of gruesome killings. Talk about red flags! 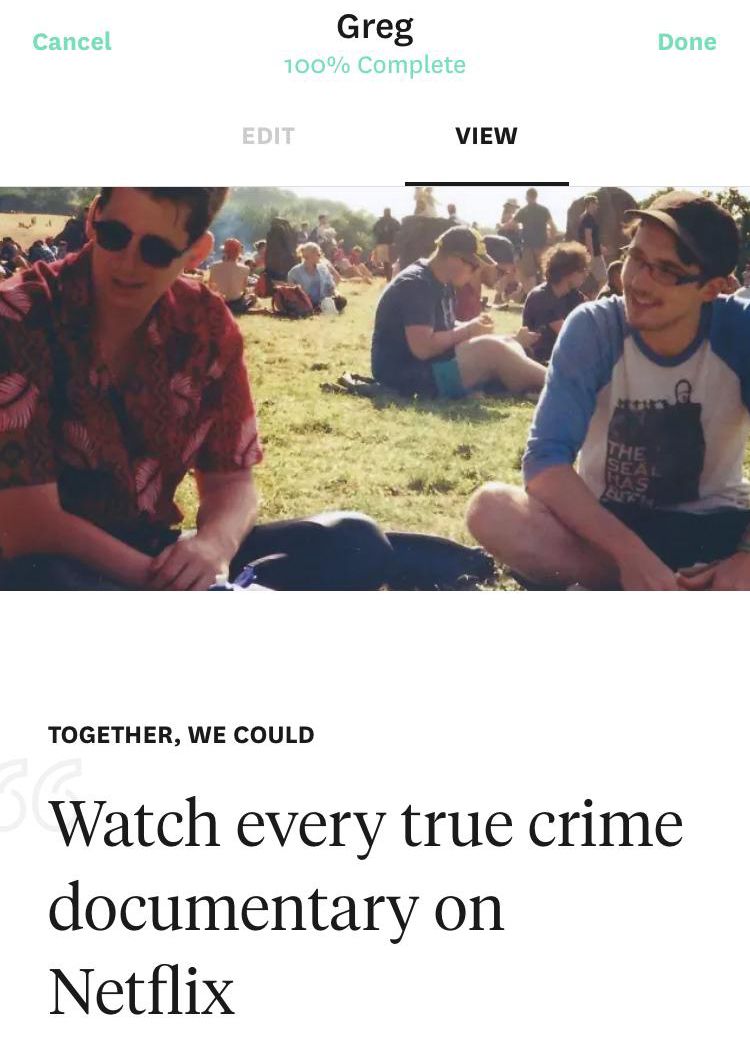 People also schedule their social lives around the release of a new documentary. People "Omg sooo excited, cancel all my plans!" and"Amazing! It's EIGHT whole episodes long! Thank you Netflix for this gift!" Take the The Disappearance of Madeleine McCann, what is particularly weird is that everyone pretty much already knows the sad story of a three year old girl going missing, yet people are foaming at the mouths to relive it all over again.

omg as if the Madeleine McCann documentary is on Netflix tomorrow ???? that’s my weekend sorted

As long as they're fit, just forget about all the people serial killers murdered!

It's already quite fucked up that in Netflix's The Ted Bundy Tapes, the serial killer is described as "charming" and "young and handsome" despite admitting to kidnapping, murdering and raping dozens of women and that people are desperate to see hot pics of him.

But then Zac Efron, AKA the abdominal waffle grill, is cast to play Ted Bundy in a dramatisation of the murderer's life and crimes. Cue all of us empathising with Bundy as our subconscious remembers the serial killer as Gabriella's sweetheart who ran across a golf course to deal with the inner turmoil of being a high school junior.

At the end of the day it's just quite messed up how loads of people on Twitter are being like "I dont care he murdered all those women I'd still bang him". Come on people.

Ted Bundy is so fucking hot I dont get it

James Bulger was a two-year-old boy abducted from a shopping centre by two ten-year-olds in 1993, who walked him across Liverpool before beating and torturing him to death.

Last year Channel 5 released a new documentary about the harrowing murder, which included one of the killers, Robert Thompson, saying his "life turned out better than it would have" if had had not murdered the toddler.

James Bulger's mum replied, saying: "I can honestly say I'm upset, fuming with the one-sided sympathy with the evil killers of my beautiful son who was only two years old when they abducted and murdered him."

I've had to watch the disgusting @channel5_tv @caravan__media documentary, to know what I'm having to deal with, I can honestly say I'm upset, fuming with the 1 sided sympathy with the evil killers of my beautiful son who was only 2 yrs old when they abducted & murdered him. pic.twitter.com/U83woQ6j0r

And with The Disappearance of Madeleine McCann, her parents Gerry and Kate have claimed the new series "could potentially hinder" the active police investigation into the continued search for their daughter. Regardless of your own opinions on the documentary's impact on the search for Madeleine McCann, the wishes of the families of the victims of these shows should be prioritised. And the conversation, jokes and memes will go from Netflix, to Twitter, and to comment sections, becoming a source of entertainment, Sunday hangover fodder, rather than anything helpful that may help solve the case.

There is around 50,000 hours of TV and movies on Netflix, surely you can find something else to watch when you're avoiding writing that essay.

If you were hooked on Clickbait, you should watch these nine Netflix series next