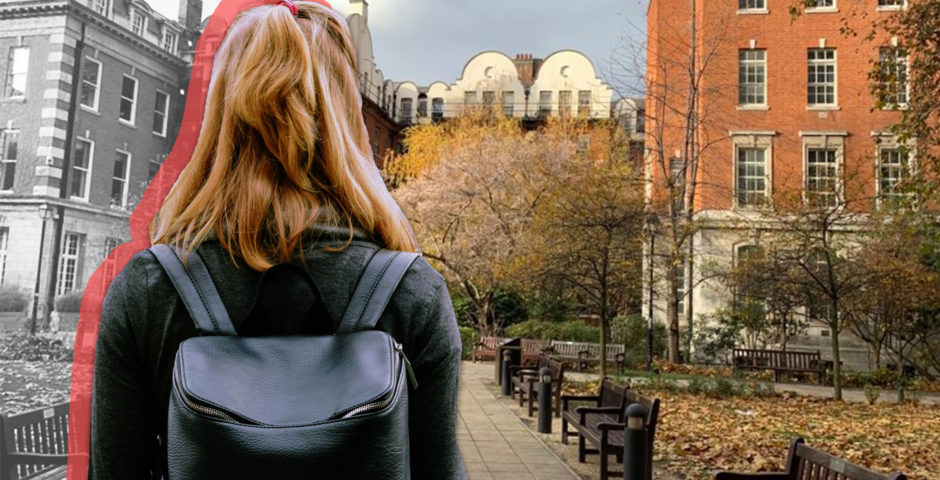 It was on a Wednesday night at a KCLSU venue when Charlie* was assaulted by a boy she did not know. Filling in a survey by The King’s Tab, she recounted: “He forced me to kiss him by holding me down in sports night at the Vault.” Unfortunately, this is just one example of sexual harassment out of multiple that have happened at King’s College London.

At the beginning of this academic year over a dozen women claimed to have been harassed by the same man in the Maughan Library. Many of the women reported their claims of sexual harassment to King’s, but the report was never followed up. The women heard nothing back. Many of the students affected reported the individual to the university only to get no response. One told The King’s Tab at the time she “was approached a number more times, which I reported to the night security guards – but I did not see it acted upon or any official reports filed.”

500 people responded to The King’s Tab’s survey to investigate how students feel sexual harassment complaints were handled at the university. Results showed issues with sexual harassment at sports night, an unawareness of how to report sexual harassment on campus, and problems with the current reporting system which requires the victim to be named.

The survey revealed almost one-third of students have received unwanted sexual attention at a KCLSU Venue, such as Guy’s Bar or The Vault. It also revealed female students are twice as likely to experience sexual harassment than male students.

28 per cent of students said they had received unwanted sexual attention at a sports night. One student, Annabelle*, told The King’s Tab: “I am ashamed to come out and say it but KCL venues and sports nights are really unsafe”.

Incidents were described in the survey, including a report that harassment had “happened many times, examples include my top being unwillingly unzipped and someone slipping their hand under my skirt” as well as transphobic abuse. One respondent said: “A guy firmly grabbed my vagina to ‘check I was actually a woman’.”

Although female students were more likely to have experienced harassment, the issue is also affecting men, with 16 per cent reporting harassment at sports night. One male student said: “It is not uncommon for ladies to get away with grabbing men’s privates, including mine on a Vault night. When reported to bouncers we were told to grow up.”

Another student, Hannah*, thought someone on the team “can’t take a no when drunk.”

Another student warned about some: “Watch out for the men’s rugby team and football teams. I am out with my girls trying to have fun and these men won’t leave me alone!!! They try and kiss you after you say no because they are drunk and it just makes you feel so uncomfortable!”

Over 8 students also made complaints about the men’s hockey team. The allegations including groping and unwanted sexual attention. It was unclear whether these comments were referring to the GKT or KCL men’s team.

Dani* told The King’s Tab: “I usually don’t go out and I was drunk but this rugby player from the King’s team smacked my bum on sports night from the Vault. I haven’t gone out since.”

Ella* also called out specific sports teams. She said: “I received unwanted sexual attention from three rugby dudes from King’s on a sports night. One of them forced me into a dry sex position that I didn’t ask for but you could tell he was drunk.”

The King’s Tab contacted the accused sports teams, all of whom reiterated they had a zero-tolerance policy to sexual harassment. Their full comments are below.

Roughly 20 per cent of students who have lived at King’s residences said they received unwanted sexual attention from other residents.

Seven per cent of students who live in these residences said they received unwanted sexual attention from staff or welfare leaders.

One student told The King’s Tab that one security guard made her feel uncomfortable by making “sexually inappropriate comments”.

Another said: “Informally letting one of the security guards know that his actions/comments made me feel uncomfortable and asked the Welfare Lead for advice. The comments stopped.”

A King’s College London spokesperson said: “We are committed to providing and promoting a positive, respectful and inclusive environment for all members of our community which is free from all forms of discrimination and harassment. Our students receive guidance as part of the induction process when they start their studies at King’s outlining where to go with concerns, and our It Stops Here campaign promotes respect, report and support for those who have been subjected to or witnessed harassment or sexual misconduct.

“All our staff are trained on the university’s policies and commitment to protecting the dignity of staff and students including providing a working environment that is free from bullying, harassment, sexual misconduct and hate crime. No student who makes a complaint will be disadvantaged in their subsequent academic career, university life or as a result of any action taken resulting from the complaint. We encourage any student who has any concerns regarding any staff member to report it.”

An overwhelming 88 per cent of students who took the survey were unaware of how sexual harassment could be reported at King’s.

The King’s sexual harassment reporting system includes an anonymous online reporting tool, but this can not be used to file a formal complaint. KCL describes this tool as “an online form which helps us to monitor the prevalence of incidents that take place and understand the impact of initiatives run by the King’s and KCLSU.”

The formal complaint procedure is made up of two stages: informal resolution and then an official complaint. King’s advises students: “Explaining directly to the offender that their conduct is unacceptable and this may prove enough to make them rethink their actions. […] It is also recognised that there are many incidents in which attempting informal resolution is not appropriate.”

Once an informal resolution has been tried, students can make a formal complaint. However, complaints can not be made anonymously, the person you are reporting will be aware that it is you who reported them.

Almost 70 per cent of the students think this reporting system should be made anonymous. Sophie* told The King’s Tab: “Policy should be changed – it may be hard for victims to speak out without anonymity helping them. Perhaps a compromise – not full anonymity, but confidentiality that only a few senior members will be aware and the general public will not know.”

The lack of anonymity in the reporting policy has put some students off of reporting staff, as they believe it could negatively impact their results. Students said they were “too scared” to report. One described an incident in which her personal tutor asked if she was “getting enough sex” in their first meeting. She said it was “awful” but she “never told King’s”, instead just asking to swap her personal tutor.

Meg* said that she reported sexist comments made by a senior staff member to her personal tutor and was told “they’re just old, it’s a different generation.”

Anna* told The King’s Tab: “Fewer people are likely to complain if they will be named – it is not easy for people to speak out if they are at risk or fear for safety. Logging complaints anonymously would give a chance to those who want to speak out and still feel safe.”

Taylor* argued that “King’s feels like a relatively safe place. However, the issues with admin, long waiting times for counselling and general lack of communication means that process of reporting anything seem’s long and daunting. For anyone in a position of unfortunately needing to report sexual misconduct, it does not feel as though your issue could be dealt with promptly and effectively.”

Lottie* told The King’s Tab she went through the anonymous complaint system but King’s said she could not remain anonymous.

“I went through the anonymous complaints system but when King’s tried to ‘resolve’ the situation between myself and another student they said I could not be anonymous anymore if I wanted King’s to process the complaint as they said the student should be able to ‘defend’ themselves,” she said.

“I didn’t take it any further as making myself known could have badly escalated the situation. Now I just hope not to see them around campus and blocked them on all communications.”

A spokesperson for KCLSU said: “KCLSU has a strict Zero Tolerance to Harassment and Bullying policy, which is detailed here.

“As with all KCLSU policies, the Zero Tolerance to Harassment and Bullying Policy applies to all sports clubs and they are made aware of all our policies as part of their PAT training.

“In regards to our KCLSU venues, staff are trained on the KCLSU zero-tolerance policy and we have also used the ‘Ask for Angela’ scheme for the last 18 months or so.

“Staff at Guys Bar this year have also been given additional training through the local Pub Watch scheme – WAVE (Welfare & Vulnerability Engagement) which looks at addressing vulnerability In the night-time economy & the ‘Good Night Out’ campaign which educates staff on understanding, responding to & preventing sexual harassment in our spaces.

“The process for dealing with any complaints around this issue is that students should contact [email protected] after which our complaints procedures will be followed.”

The responses from King’s sports teams

King’s College London Football Club said: “KCLFC prides itself on being a welcoming, friendly and inclusive organisation and has a zero-tolerance policy to any sexual harassment.

“If the survey has found that we have fallen short on some occasions we will investigate thoroughly and take swift and decisive action. In addition, we will look to cooperate with the SU to make sessions regarding sexual harassment and consent mandatory for all of our members in the future. This is something the club will take very seriously and we commit to taking all possible steps to eradicate any such behaviour.”

GKT Football Club said: “We at GKTFC are shocked and saddened to hear about the allegations of sexual harassment on campus.

“As a club, we have a zero-tolerance policy towards this behaviour. We would like to offer our support to anyone who has suffered and encourage them to raise these incidents to the appropriate authorities so that they can access the necessary support.”

KCL Rugby Club said: “On behalf of all at KCLRFC, we are shocked to learn of the allegations being made against the club.

“KCLRFC operates a zero-tolerance policy towards such actions and are in discussion with the wider community as to how such occurrences can be completely prevented. We aim to work with other societies to create a fully inclusive sports environment that is welcoming for all – sexual harassment cannot and will not be tolerated at KCLRFC.”

KCL Men’s Hockey Club said: “We strive to create a safe and inclusive environment for everyone to feel welcome to enjoy playing hockey, and we take instances of sexual harassment very seriously.

“Should instances of sexual harassment be reported, a procedure is followed whereby a meeting is conducted between the involved member and our President to make it clear that such behaviour is unacceptable and, should it continue, their membership will be reviewed.

“We are appointing a Diversity and Inclusion Officer, who will ensure that everything that we do helps to make KCL Hockey an inclusive, welcoming and safe place for all students to be a part of.”

GKT Men’s Hockey Club were contacted for a statement but did not provide a response.

• ‘We can’t take action but the uni can’: KissCL speaks out about Maughan ‘creepy guy’

• Investigation: Why King’s students are waiting months to see a counsellor