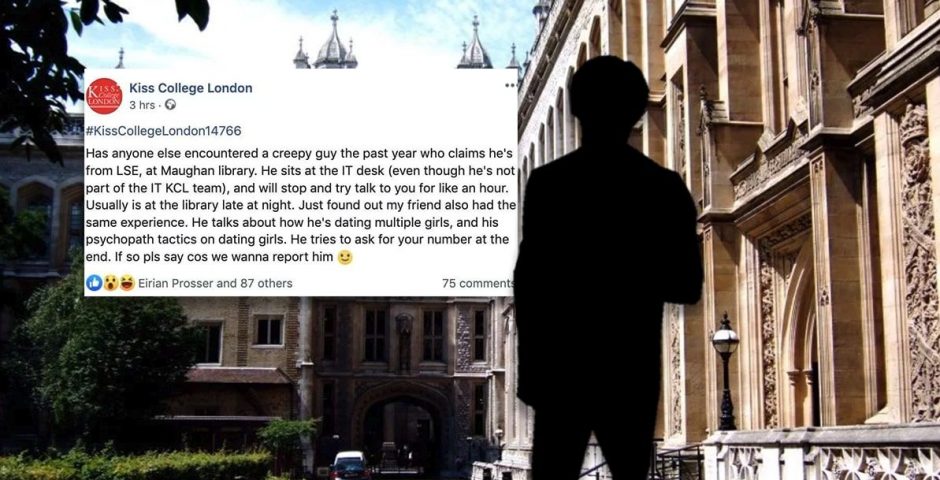 King's College London is investigating claims a "creepy guy" has been harassing girls in the Maughan library.

According to a confession posted to Kiss College London on the 25th October, the man sits at the IT desk at the Maughan, although is "not part of the IT team", where he tries to stop and talk to girls "for like an hour" and tries to ask for their number.

The Tab King's spoke to more than 10 girls claiming to have been harassed by the man. One of the women told The Tab King's the "creepy guy" pretended to be a King's security guard to lure her back to the library, where he had found her ID card. 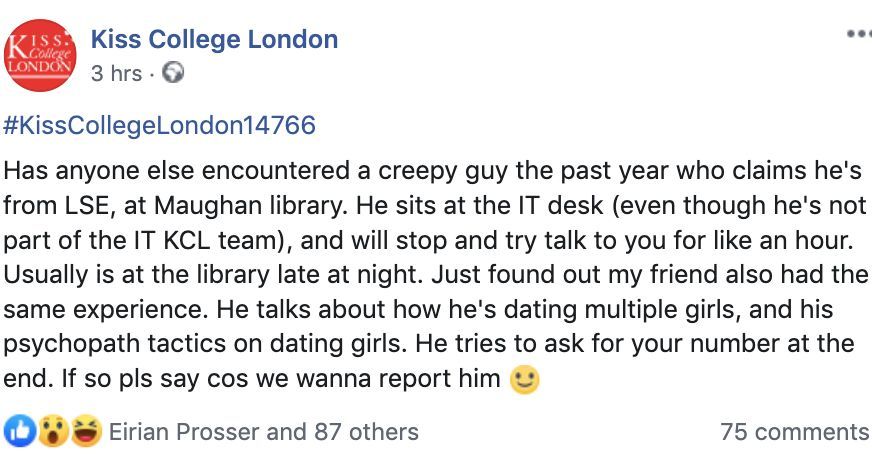 The full post reads: "Has anyone else encountered a creepy guy the past year who claims he's from LSE, at Maughan library.

"He sits at the IT desk (even though he's not part of the IT KCL team), and will stop and try talk to you for like an hour. Usually is at the library late at night.

"Just found out my friend also had the same experience. He talks about how he's dating multiple girls, and his psychopath tactics on dating girls.

"He tries to ask for your number at the end. If so pls say cos we wanna report him."

Hundreds of students reacted to the post. Many girls claimed to have also been sexually harassed by the man referred to in the post at the Maughan Library.

One commenter said she had seen this happening for "the past two years".

The women The Tab King's spoke to identified a man with the same name and physical description.

The women told The Tab King's the man would frequently sit at the KCL IT help-desk at the Maughan, and offer them help with printing as a means of striking up a conversation.

One King's student, Holly* told The Tab King's a year ago the man followed her to her bus.

"He picked me up and kinda throw me above his shoulder to be all cute," she said.

Holly told him to leave her alone, as she needed to catch her bus, before he proceeded to kiss her on the mouth.

She began to receive calls and texts from him, one of which read: "Waste my time again and I'll spank you out of the country".

Later Holly received a text from an unknown number claiming to be a security guard and that she had lost some ID.

After a few messages exchanged, the sender revealed he was actually the "creepy guy", and it was a "prank". He then continued to text her, at one point calling her and pretending to work for the Metropolitan Police. 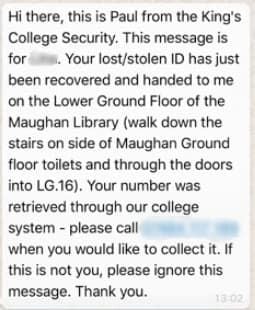 The 'prank' pretending to be a security guard

"He told me all women are 'evil' and deserved bad treatment"

Another student, Emma* told The Tab King's the "creepy guy" would openly brag about trying to "make girls feel insecure about themselves."

"He was a very intimidating guy," she said.

He stopped Emma by the lift and during the conversation said to her: "I’ll take you on a date and then you’ll come to my room and the next morning I won't call you again."

After turning down the man via text, he began to message her saying she was stupid, and had "lost her chance" with him.

The harassment continued and Emma eventually agreed to go on a date with him.

On the date he "started talking about my past relationships saying stuff like 'I bet your boyfriend caught you in a bed with a guy, with condoms hanging around'."

Later on the date with Emma, the man described women as "evil", saying they "didn't deserve anything but bad treatment", before talking about the girls he'd allegedly had sex with in the Maughan library.

Emma ended the date, telling The Tab King's she felt "disgusted", and as they were walking he "pushed her in front of a car in traffic".

"He laughed, saying that it was a joke and that I was being a pussy,” she told The Tab King's.

The "creepy guy" told one of them he was "in a relationship with eight other girls" some students said he claimed to have up to 15 girlfriends at a time.

He would also describe his "tactics" for attracting women which included treating them poorly and "waiting for them to crawl back to him".

The man asked the women personal questions, asking them repeatedly whether they had a boyfriend.

One girl said she did have a boyfriend, to which he responded: "What do you even like about him?" before telling her that she "can't even have sex with loads of different people" because of her relationship.

For Holly, it became clear the "creepy guy" was watching her when she visited the library. He would send her text messages later that day talking about things that had happened whilst she was at the library, or who she had been with.

"He basically said that he was watching me," she told The Tab King's.

A different KCL student told The Tab King's: "He would stare at you when working, and if he saw you get up for a break (coffee, toilet break etc) he would follow a second later and happen to run into you to start a conversation."

Most of the women said they felt unable to file a report, as they either didn't understand the procedure or felt it wouldn't be taken seriously.

One student said: "I didn't know who to report it to.

"I don't feel like KCL has a clear procedure for reporting harassment and if we do we aren't told it by tutors or during inductions."

Even when an incident was reported, it seems that no real action was taken.

One student said she "was approached a number more times, which I reported to the night security guards – but I did not see it acted upon or any official reports filed." 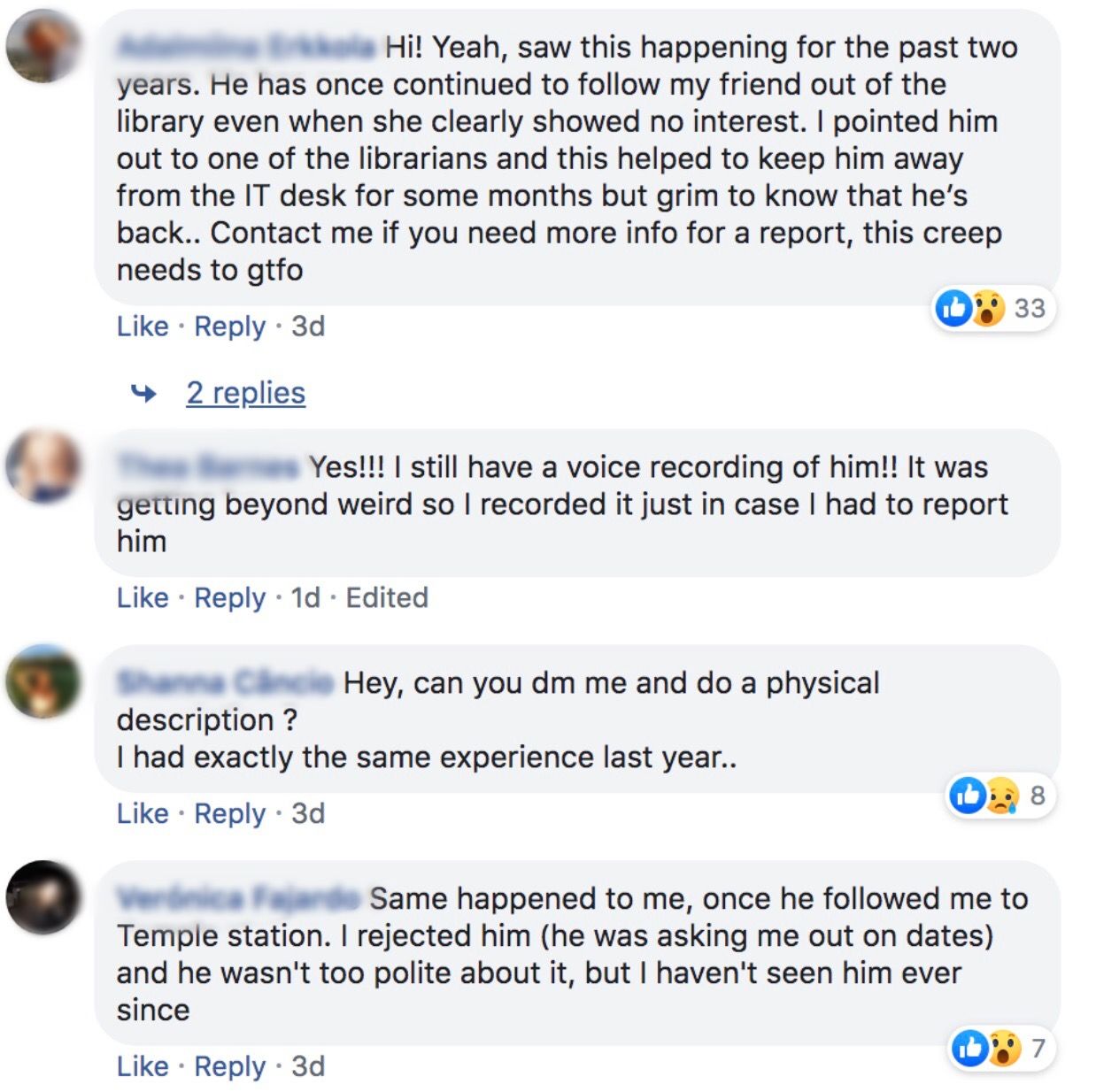 Three different women told us that they will now avoid the Maughan specifically because of their interactions with the man from the KissCL post, chosing instead to study at Waterloo library or at home.

One student told The Tab King's: "I avoided that library unless I specifically needed books from there."

Another said: "When I did go to the Maughan, I ended up just walking around with male friends in the library, or just other girls, so that he wouldn't approach me again".

Despite many women sharing their experiences with the man in the comments, multiple students tagged their friends in the post, making jokes about how they use the same "tactics". 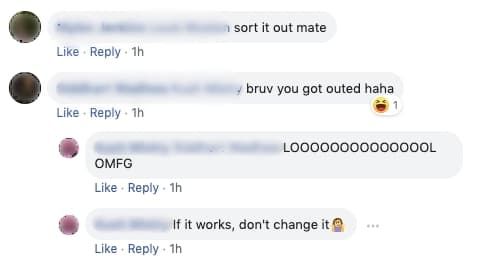 A spokesperson for King's College London said: "We are looking into concerns raised by some of our students who use one of our libraries and are investigating further."