Put this on your personal statement

You, an average student, have formed stereotypes about everyone who studies a certain subject. But are those actually based in reality? Luckily, there’s some data to back up your narcotic prejudices.

Our 2018 drugs survey was answered by over 12,000 students. We’ve already told you which drug is most beloved by each uni, how much students are paying for coke, and how much each uni loves ket.

Of course, take it with a pinch of salt – it’s a self-selecting survey- but the data illustrates the differences between courses. And it’s looking interesting for philosophy students.

Which subject has the druggiest students?

Topping the table are philosophy students , with nearly 93 per cent of students saying they’ve tried drugs.

90 per cent of journalism students say they’ve tried drugs. But it was only for content, they swear.

At the bottom of the pile are medicine, wisely. Givers, not takers, that lot.

They’re followed by languages students, whose courses presumably don’t extend as far as asking for a gram of ket on a weird Parisian night out.

Check out the full table, showing the percentage of students who said they’d ever tried drugs. 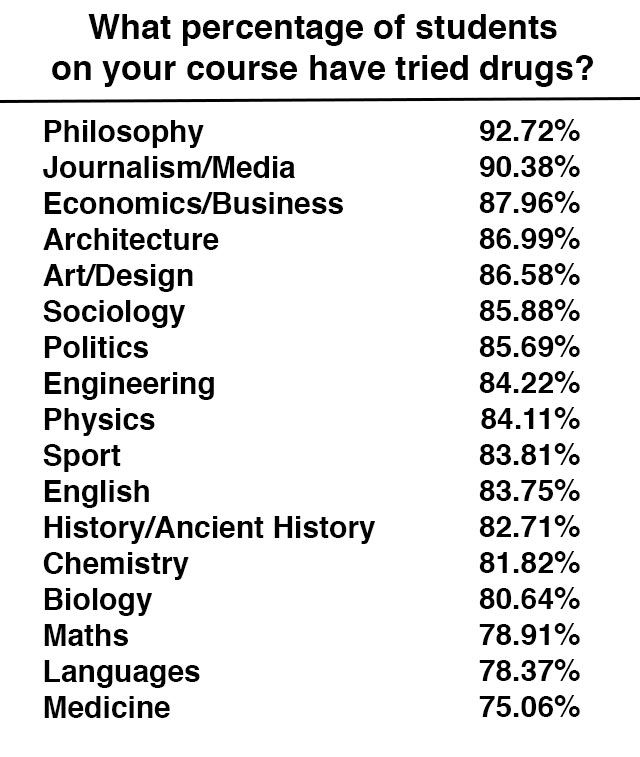 Which subject loves MDMA the most?

Again, philosophy students take the (disco) biscuit. It’s to be expected, given their habit for finding meaning in things that simply aren’t there – whether that’s a 3am smoking area conversation or the poundshop political philsophy of Robert Nozick.

Art and architecture students are coming up the table, snatching second and third place.

Careful in your next english seminar – almost exactly half the people there are MDMA users.

The full table shows the percentage of respondents who say they do MDMA once a year or more. 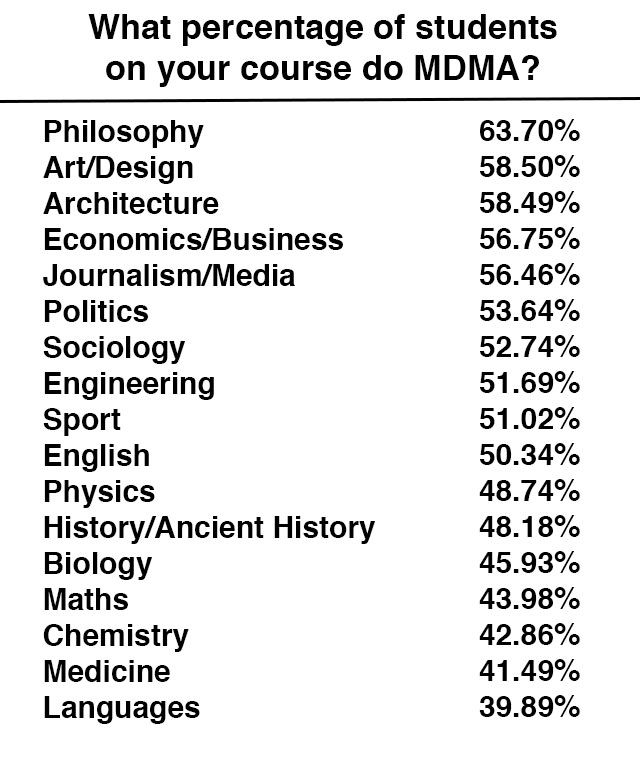 Who loves coke the most?

A course notorious for being sleepless and damn hard work, is it surprising architecture has got over half of its students doing coke?

In fact the only surprise is that they’ve beaten economics and business students. Still, it’s a narrow victory, and one that will no doubt be reversed once all the wannabe Jordan Belforts get on that grad scheme.

Medicine and languages move out of their usual spot at the bottom of the table, replaced by maths and physics students. Their brains already work fast enough. 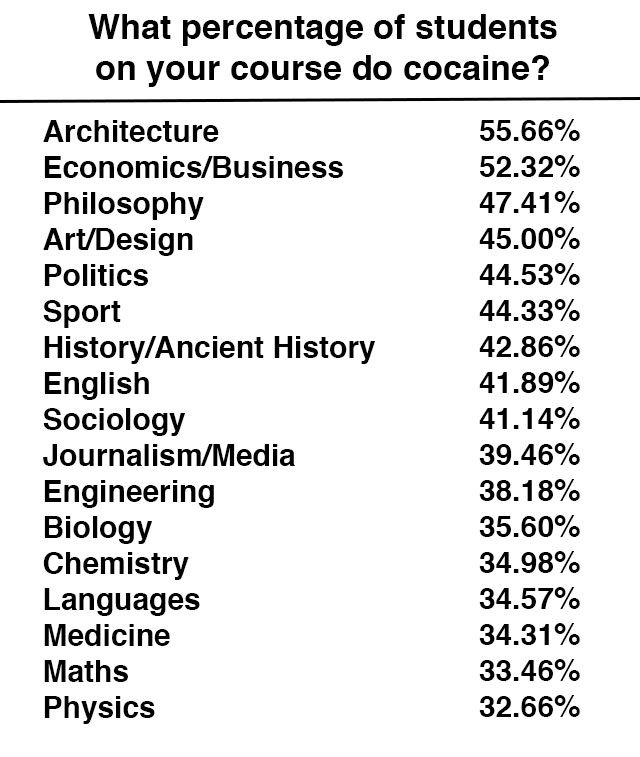 Who loves NOS the most?

It’s hard to make a joke linking a sports student trope with balloons, but necessary as they’re the subject which do them the most. They have knowledge of the lungs and therefore see the act of doing a balloon as some kind of sports performance exercise? They’re thick so don’t mind zapping away a few brain cells?

Let’s try with economics students, who come second on the list. Easy – they instinctively see the utility-maximising opportunity in a box of 24 cream chargers for £10.

Why are so few english students doing NOS, though?

Save yourself and check out the full table below. 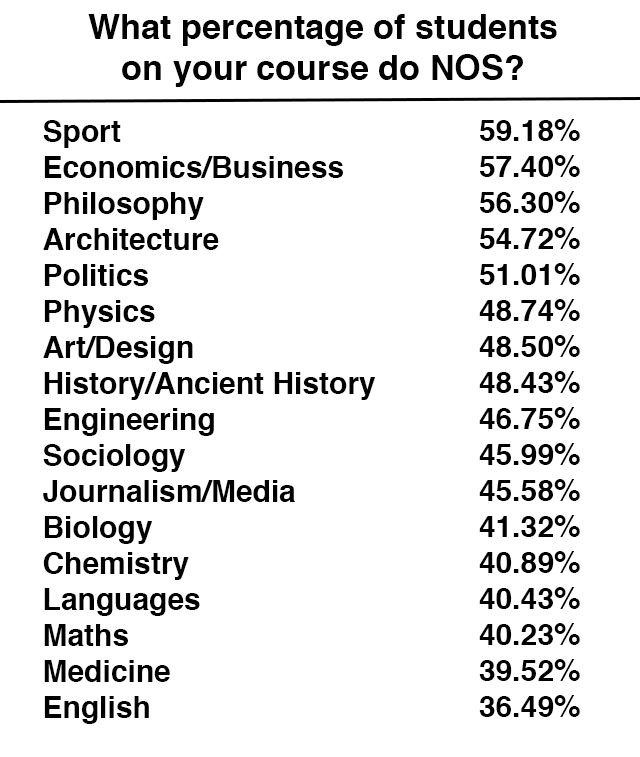 Who’s doing the most ket?

If you’re trying to break out of the conventions of all those mundane right angles used in buildings, it makes sense to get wonky. Which, presumably, is why architecture students are doing ket more than anyone else. 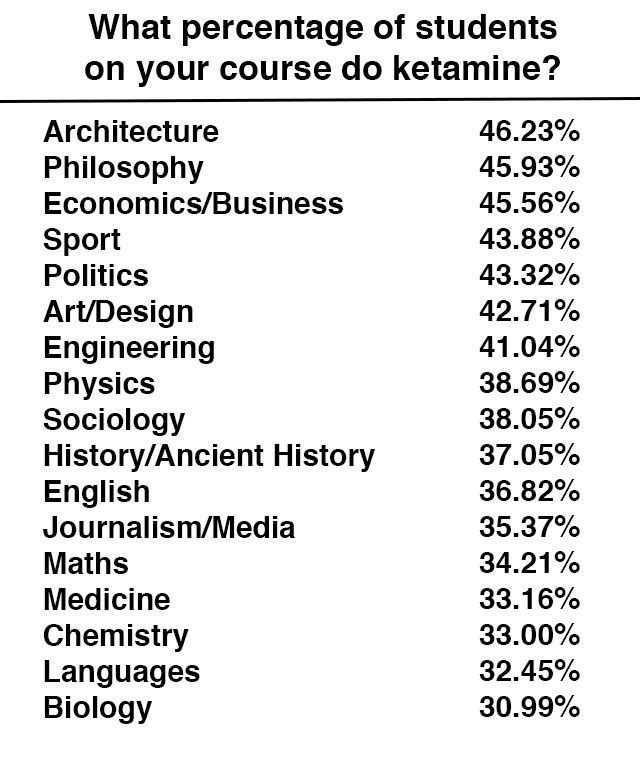 • Check out this scientific map of each uni’s favourite drug