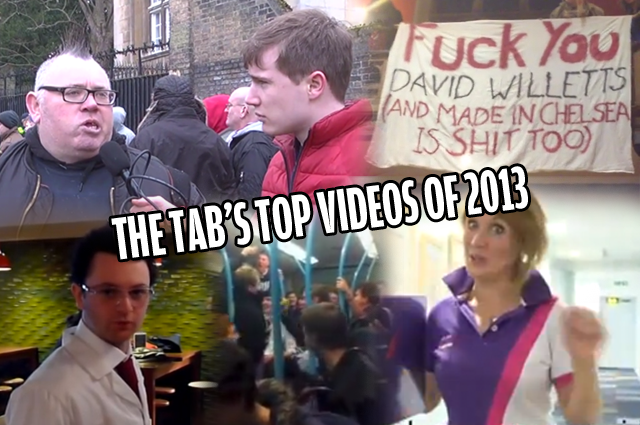 The best student videos of 2k13

Students do the funniest things…

Plenty of students have been up to some ridiculous antics this year. Most of the knobheads have decided to film these antics, and we’ve published many so you can get your fill of schadenfreude.

Student puts his head through a table

What? After a night out, one Notts student decided to smash his face through a coffee table. All for £20.

What? 500 students and their rendition of the footy chant sweeping the nation after they refused to leave a nightclub in the Welsh capital.

Where? The sordid carpets of The Ram, Exeter

What? The Harlem Shake was attempted by many but achieved by few (most notably in Liverpool). UCL had one of the better efforts, with the biggest in Europe.

Where? On a bus, in the middle of Scotland.

What? These ‘lads’ came under fire for their sick and sexist chants after joking about miscarriages.

What? The traditional game of fives ended in one young chap losing and travelling all the way to Edinburgh. He was then kidnapped on his return leg in Bristol, and forced into all manner of things.

What? Revision tension gets a bit much for one lad. “You’re a cunt. Everyone here hates you.”

Where? The Oxford Union

What? Minister of State for Universities was heckled by protesting students over cuts to uni funding. Spenny Matthews was also present. He got slagged off too.

Where? The best SU in the country (apparently)

What? Loughborough’s Exec decided a remake of Naughty Boy’s La La La was the best way to advertise what they can offer. Shame Naughty Boy filed a complaint and had the audio removed because it was so naff.

Students pose for a video thinking it’s a photo

Where? Nottingham Trent (of course)

What? A horrendous, cringeworthy medley of pointing, posing and pouting for the camera, when actually they’re being filmed. Awkward.

Despite all the stupidity, there’s been some interesting stuff too. Here’s a couple of the long watchers from the best of Tab TV…

What? In the year of mass right wing protests, our pick of the bunch comes from the EDL march in Cambridge. This gem includes people needing a wee, a lot of beer cans and a Bill Oddie doppelganger.

What? A bunch of drunk students giving us their views on the latest current affairs. “WHO DOESN’T LOVE CUCUMBER SANDWICHES?!”