The photo was allegedly taken in March

A leaked photo, shown to The Tab King’s, has revealed a wall in Guy’s Bar with the n-word graffitied over it.

The photo was allegedly taken on March 11th, 2020, and shown to a group chat of KCLSU Presidents and those who work at Guy’s Bar.

The group chat of the SU presidents and those at Guy’s Bar revealed they were openly ashamed of the graffiti and would look into the matter further. 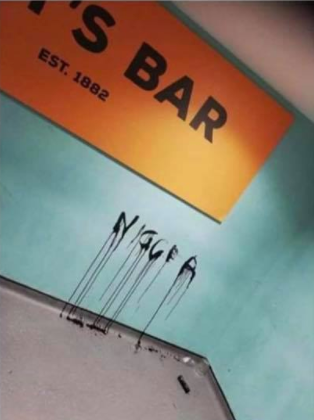 The message from the KCLSU President and Guy’s Bar group chat, shown to The Tab King’s, read:

“Hey, just in light of last night’s incident I just want to make everyone aware that we are doing everything in our power to ensure King’s can act appropriately on the matter. We are deeply saddened and ashamed of the actions of the students involved and it is obviously a completely abhorrent act and something that we completely condemned.

“This falls far from what we expect of our members and our customers at Guy’s Bar – or frankly, anyone within our student community. I understand the image is now circulating in the group chats and I would really appreciate it if you could let them know where we stand with the situation and that we are trying to get the appropriate actions taken against them.

“If anyone has any information that can help us in our investigation then please let us know.”

An anonymous source who spoke to The Tab King’s told us: “I heard from friends that it was a non-sports person and they were stopped by security leaving as he was covered in black paint and wearing loungewear so stood out as not really being there for the event and they’d already seen the graffiti and knew it was him.

“I didn’t hear anything about what happened to him after nor did we receive a statement from Guy’s Bar or the uni that I’m aware of.

“I feel like they’ve managed to hush it up because of lockdown. There was talk about Guy’s Bar being canceled because of this for the rest of the year but obviously lockdown meant they were anyways.”

The reveal of this racist vandalism comes after two of King’s students were accused of racism last week.

Such racist incidents lead to a petition being created by the Intersectional Feminist Society calling for the university to address the institutionalized racism and racist acts by students.

Students now are also calling for Guy’s campus to be renamed after Thomas Guy’s links to the slave trade.

KCLSU commented: “We are appalled at the nature of this act, just as members of our community would be. We do not tolerate any form of racism in our venues, on our campuses and within our student community and beyond. We take our responsibility to our community seriously and Guy’s Bar was closed as soon as the graffiti was discovered, so we could investigate. We repainted the wall immediately to minimize the impact on our community. When a criminal act takes place on KCLSU property, as it did in this case, we inform the police of the incident.

“We are committed to working with our community to look at the naming of all our spaces to make sure our black students not only feel safe but thrive. Liberation in its truest sense can only be achieved as a collective effort and entails the examination of what we can all do within our respective power to help challenge discrimination, resist against structural oppression, and build a more humane and habitable world.”

King’s College London have been asked for a comment.

• ‘It wasn’t racist’: KCL student who ‘sat with black girl’ to get in prospectus