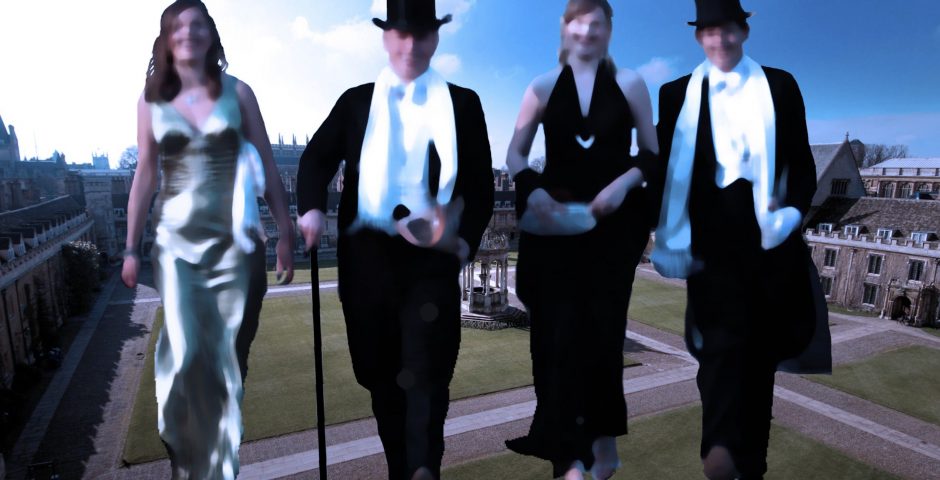 Many Cambridge colleges are doing an abysmal job of recruiting students from genuinely disadvantaged backgrounds, according to new figures obtained by The Tab.

Cambridge has never released college-by-college data on students from "low participation" neighbourhoods before – areas in the bottom 20% when it comes to sending students into higher education.

And the numbers are startling. They show:

● Robinson, Sidney and Trinity – who have the worst records – have all welcomed less than one disadvantaged student for every 33 UK-based undergrads admitted over that period. The next worst colleges were Churchill, Queens' and Trinity Hall

The figures reveal in stark detail how poor most of Cambridge's colleges are at attracting and admitting talented applicants from schools who don't traditionally send a lot of students to uni.

Their publication will likely increase calls for Cambridge to centralise and professionalise its admissions process and apply more rigour to its outreach efforts. And they will ramp up pressure on the Office for Students to sanction Cambridge by not letting the university charge more than £6,000 fees if it does not attract a wider sample of society.

Nick Hillman, a former special advisor to the universities minister, told The Tab he was "utterly shocked" but "not surprised" by the numbers, and said: "The Tab has done a good public service in getting this data because it hasn’t been available before."

The numbers were obtained as part of The Tab's 10x Campaign, which is pushing unis to make more effort to reach and admit students from non-privileged backgrounds. The campaign is named after the fact that a privileged school leaver is 10 times more likely to progress to a top university than a underprivileged one, according to UCAS figures.

Hillman, who is director of the Higher ­Education Policy Institute, added: "You only have to walk around Oxford and Cambridge to know they are not diverse places. Our oldest universities should reflect the society in which they are rooted to an ever greater degree. That's not about left or right politics, it’s about potential and talent being realised by people from all backgrounds."

Robinson only admitted five disadvantaged students in total between 2016 and 2018, meaning just 1.8% of Robinson's UK-based students were from disadvantaged areas, even though those areas account for 20% of students. 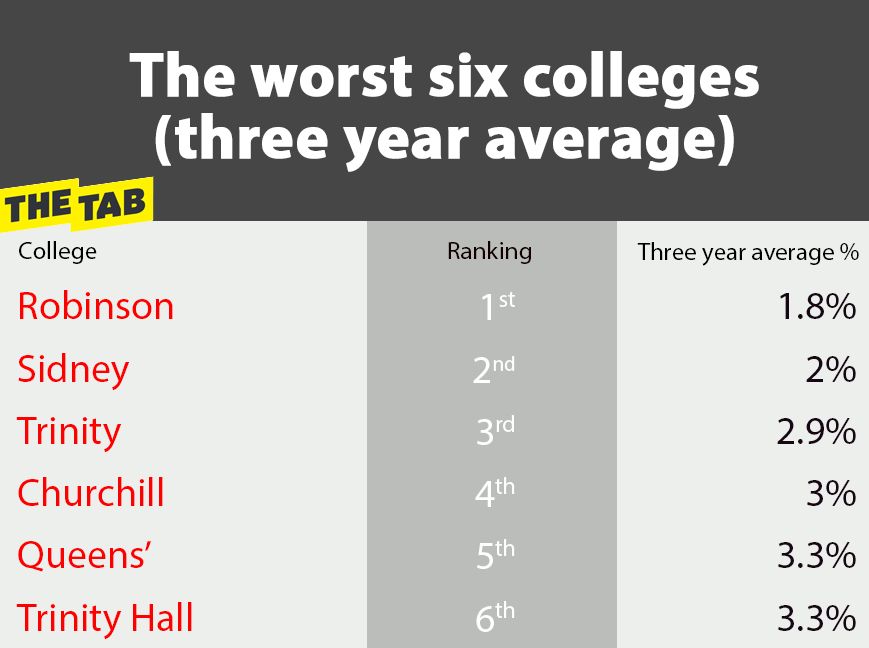 The definition of 'disadvantaged' used in this story relates to the bottom quintile of the government's POLAR (participation of local areas) measure. The system ranks postcodes according to how many of their young people participate in higher education and divides them into five groups (quintiles), each holding an equal proportion of young people.

Like any measure it is imperfect, but it is used by the university admissions office in its annual statistics. "Whatever data set you use, people will find a reason to criticise it," says Hillman. "POLAR is good enough for this sort of analysis – it was invented for this."

Trinity Hall admitted just ONE student from a bottom quintile postcode in 2018, out of 73 students admitted from the UK. The college suffered a PR disaster earlier this year when a video emerged of a member of the college saying "inclusivity is the single biggest problem facing the modern age" and making a joke about people who can't afford swimming lessons. The college cancelled the Crescents garden party as a result.

On its website, Trinity Hall says it is "committed" to admitting students from "all backgrounds" – but over the last decade, they have only once given more than two places per year to students from low participation areas.

Robinson, the worst college over five years, admitted just one disadvantaged student for three years in a row, despite calling itself "one of the most egalitarian and relaxed colleges" on its website. In 2017 it had the highest proportion of private school students, almost level with St John's.

To provide a longer view The Tab also ranked the colleges over a five year period. Robinson, Trinity and Trinity Hall had the lowest averages between 2014 and 2018. The next worst were Clare, Murray Edwards, Queens' and St John's, who clocked around 3%.

Some colleges have gone backwards, notably Churchill, who were admitting more disadvantaged students in 2015 and 2016 than they have in 2017 and 2018. 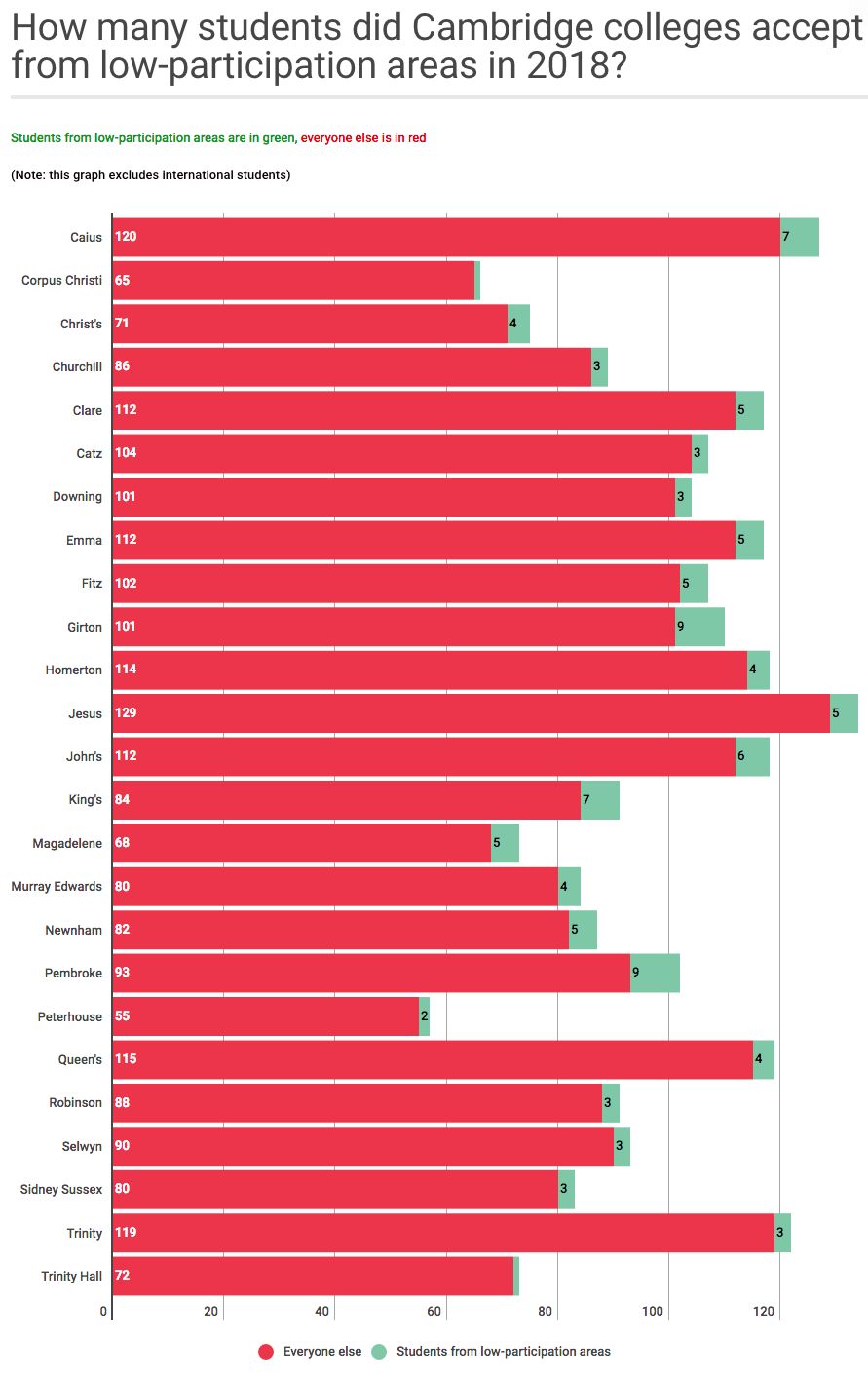 The Tab pushed the university to release the data so students and the public can better understand why Cambridge's record on student diversity is so poor.

In fact only 40% of Cambridge students went to non-selective state schools, despite more than 80% of students going to those kinds of schools. And earlier this year a respected think tank found Cambridge was the most unequal university in the UK.

Clearly numerous factors which are out of the control of universities and which go back to early school years make it harder for students from low participation neighbourhoods to get the grades and the confidence to apply successfully to Cambridge. Nevertheless, the POLAR numbers reveal a concerning imbalance in the kinds of students who gain entry.

Dr Sam Lucy, Director of Admissions for the Cambridge Colleges, told The Tab the university-wide number had risen to 4.6% and said: “The number of acceptances will vary from College to College, year on year, and there will be fluctuations, but all Colleges, together with the University, collaborate to encourage more students from this cohort to apply."

She went on: "The University works hard to raise aspirations among disadvantaged groups and spends more than £5 m a year on outreach activities establishing links with schools across the UK."

When asked about its consistently poor recored on diversifying admissions, Cambridge usually refers to the Area Links Scheme, which links each college with an area of the UK where they focus their Access work. The numbers in today's story suggest that relying on the scheme to deliver consistent results across all the colleges is extremely complacent.

The figures also show what is possible when colleges focus properly on widening their intake.

King's, Pembroke and Magdalene have all averaged over 5.5% of their home student intake from bottom quintile neighbourhoods. King's took in 17 such students over three years, or 6.28%. Newnham, Peterhouse and Girton also admitted more than 5%. 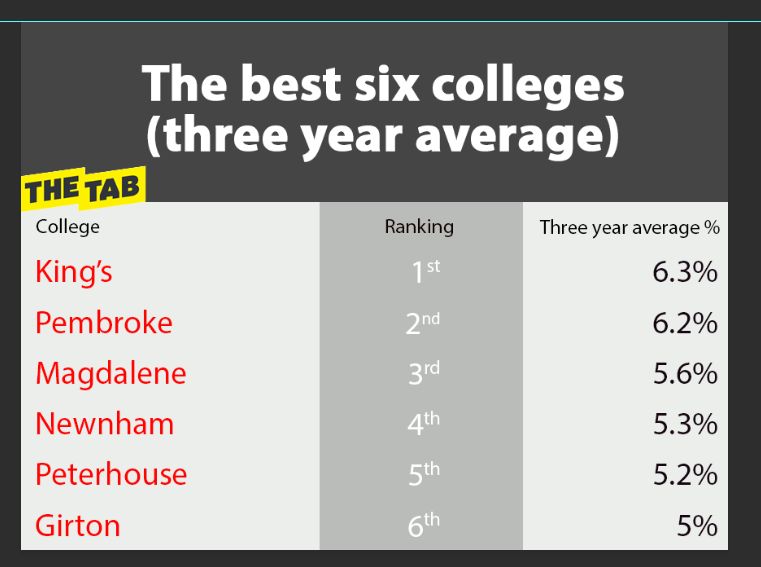 Dr John Munns, Magdalene's admissions tutor, told The Tab that his college "has worked hard in recent years to increase admissions from under-represented groups, and we are delighted to see this work beginning to bear fruit." He said their success came from "pro-active recruitment and careful analysis of the context of each individual application that comes in."

The numbers make clear that rapid improvement is possible. Pembroke has improved its numbers every year for five years. The college took one student from the bottom quintile in 2014, three in 2015, four in 2016, six in 2017 and nine in 2018. No college in the past five years has reached double figures in a year.

The highest performing colleges in 2018 were Girton and Pembroke, who both admitted 9 students from this bracket, making up 8% of their respective cohort for the year.

'We welcome your scrutiny'

When we contacted the worst performing colleges, several said it was fairer to judge them on their admission of students from the bottom 40% of postcodes rather than the bottom 20%. In reality those figures make the colleges in question look even worse.

For example, Sidney sent numbers which show that students from the bottom 40% of postcodes only made up around 10% of the college's home entrants in the past few years. Trinity tried the same tack: their number was around 8% from the least privileged 40% of students.

Responding to The Tab's figures, a spokesman said Sidney is "committed to admitting the students with the greatest academic potential from all backgrounds" but added: "it should be remembered, though, that individual Colleges receive small numbers of applicants, and variations in applications, those accepting an offer, or being successful in meeting its conditions, can skew figures considerably." 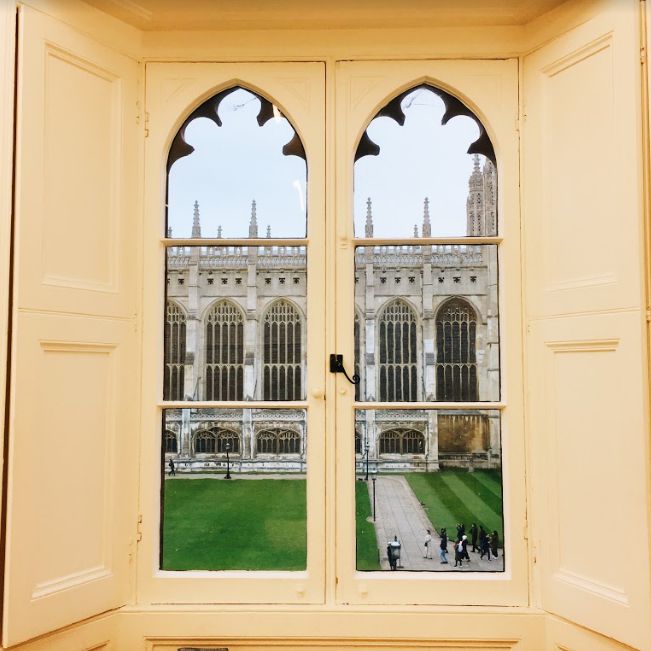 Sidney sought to defend its record by pointing to their ratio of applicants to acceptances among disadvantaged applicants. "In the data released by Cambridge Admissions Office to The Tab, it is clear to see that Sidney made offers to 43% of its applicants from POLAR quintile 1 in 2018, far higher than the average application to offer ratio."

Which is true – but only because Sidney only attracted 16 applicants from students in the bottom 20% of postcodes – one of the lowest numbers of any college.

Robinson didn't provide an explanation for its consistent inability to attract disadvantaged students, but listed a variety of outreach tasks that it performs, apparently without much return on investment. It describes its outreach events as "well established" and says it is "fully committed" to them.

Trinity told us they are "continually reviewing" their access program. Fellow for Widening Participation Projects, Professor Adrian Poole, said: "Trinity plays a full role in the inter-collegiate University’s commitment to widening participation, and to that end runs an extensive programme of events at College, visits to schools and attendance at university fairs."

A spokesperson for Trinity Hall told The Tab: "We welcome your scrutiny of issues relating to fair access," and said: "We are committed to enabling fair access for applicants from socially and economically disadvantaged backgrounds and we are always seeking to improve our performance."

The college said "an unusually large proportion of them [disadvantaged applicants] missed their offer by a substantial margin" this year but added: "We carefully considered all unsuccessful applicants on a case by case basis. We plan to increase the number of offers we make to credible applicants from this quintile this year."

Churchill said it had among the most state school students of any college, was proud of the diversity of its student body and said using individual data sets like POLAR instead of a range of metrics can "give a partial and at times misleading picture". It said The Tab's story "fundamentally misunderstands" the issue of widening participation and described the numbers as "the science of small numbers and a statistical accident."

Exposing a failure of outreach

The discussion about how to diversify Cambridge's student body often focuses on the interview process and the suspicion that old school fellows are favouring well polished public school applicants.

However this data also suggests extremely insufficient or poorly executed outreach work at many colleges because the base number of applicants from low participation areas is so low.

In our next story on this topic, we will be focusing on the reasons why colleges are failing to admit meaningful numbers of students from low participation areas. In particular, we will be delve into the failure of the outreach programs which the university and the colleges so often refer to as evidence that they are doing everything they can to diversify admissions.

Additional reporting on this story by Hollie Berman

If you have worked in these outreach and access programs and would like to contribute insight or information for our next story, anonymously or on the record, please email [email protected] We are also looking for pitches about the experience of coming to Cambridge from low participation areas.

All data quoted relates to Cambridge's current ‘Home’ definition, which is all applicants who are domiciled (permanently resident) in the UK.

We have chosen not to include the Mature Colleges in this story because the majority of applicants don't apply from UK schools and colleges, or they apply independently of a school. This means they have few applicants who match the POLAR postcode system, which makes their data vulnerable to misinterpretation and makes them difficult to compare to other colleges.

Because of the Pool system, an application for one College could appear again in that year’s figures as an acceptance for another College because the student was placed in the Pool.

・Posh kids get private tutoring to get into Oxbridge. This recent grad is offering it to state school applicants for free

・Privileged students are 10x more likely to progress to a top uni. The Tab is campaigning to change that