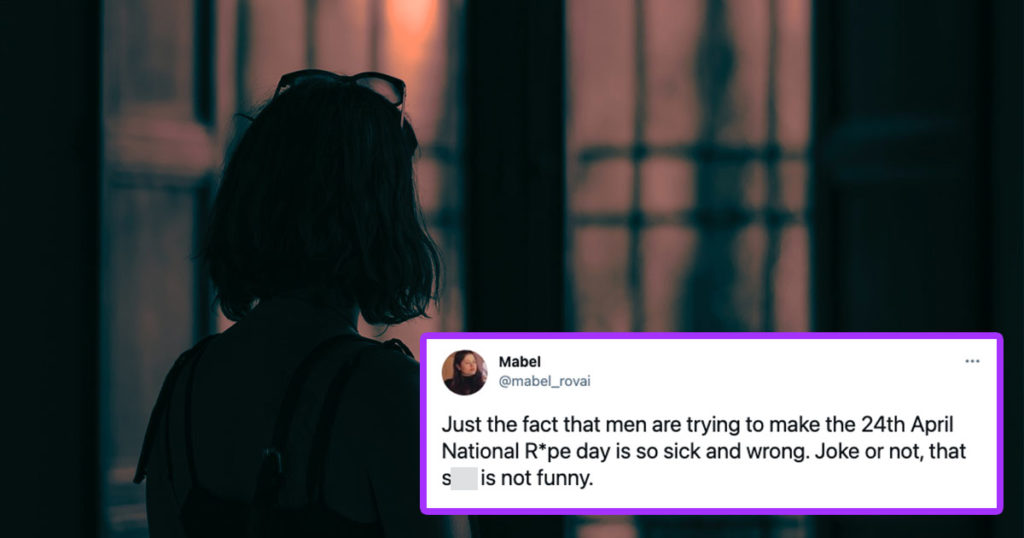 A disturbing new TikTok hoax has emerged, with people calling April 24th “national rape day”. People are warning each other about it, whilst others are saying it’s just a disgusting hoax that people have made up. But whether it’s real or not, the reaction to April 24th shows that women’s safety is still seen as a joke by some – and this needs to change.

It’s unclear where the April 24th hoax came from, but in April 2019, an Urban Dictionary user published a now-deleted “national rape day” definition, saying this is April 24th: “The day when it’s legal to rape people”.

Obviously, this is not true – but whether it’s a joke or not, it couldn’t be any less funny. Turning something that’s every woman’s worst nightmare into a “joke” just shows you don’t take our safety, or our concerns about it, seriously.

I’m seeing a lot of people saying the April 24th stuff is a joke. I think I speak of behalf of most decent human beings when I say that terrorising women with the fear of rape or sexual assault is not funny in any capacity. It cannot be excused as dark humour. It is terrorising.

97 per cent of young women in the UK have been sexually harassed. Over 400,000 women are sexually assaulted every year in England and Wales, and every three days a man kills a woman. Women live in fear of sexual violence, harassment and assault: It’s something that runs through our minds every single time we leave the house.

From an early age, girls are taught how to “avoid” getting sexually assaulted: Wear trainers so you can run away; hold your keys in between your fingers to protect yourself; don’t have headphones, so you can hear footsteps coming towards you. The conversation around April 24th is no different, with people all over social media telling women not to go outside on the day, as well as sharing tips on how to stay safe.

But the thing is, all of this “advice” ignores the actual problem, which is the men who harass, assault and kill us – and those who see April 24th as something that’s acceptable to joke about.

Last month, 33-year-old Sarah Everard was abducted as she walked home from a friend’s house in Clapham. Her body was found a week later. A Met Police officer is due to go on trial for her kidnap and murder later this year.

After her disappearance, police told women in the Clapham area not to go out alone at night. But what are men being told to to? Women shouldn’t have to place ourselves under house arrest just to try and stay safe – it’s men who need to educate themselves and change their behaviour.

April 24th rumours have spread from TikTok to Exeter University, where screenshots allegedly came from a group chat, sparking rumours there is “a group chat of 100+ guys on campus [with] a plan to rape as many girls as they can before April 24th”. The university said the rumours circulating online are a “hoax from TikTok”. It urged students to “ignore” the threats, which it says are “designed to cause fear and to play on serious and genuine concerns regarding sexual assault”.

The uni’s right – every day, women have genuine concerns about sexual assault. We live in fear, and to turn our serious feelings into a joke with a TikTok hoax is insulting and downright dangerous.

If you’ve joked about April 24th, you’re part of the problem. Whether the day is a hoax or not or not, anyone who makes light of something that’s been dubbed “national rape day” simply does not take women’s safety seriously.

Featured image before edits via @korpa on Unsplash