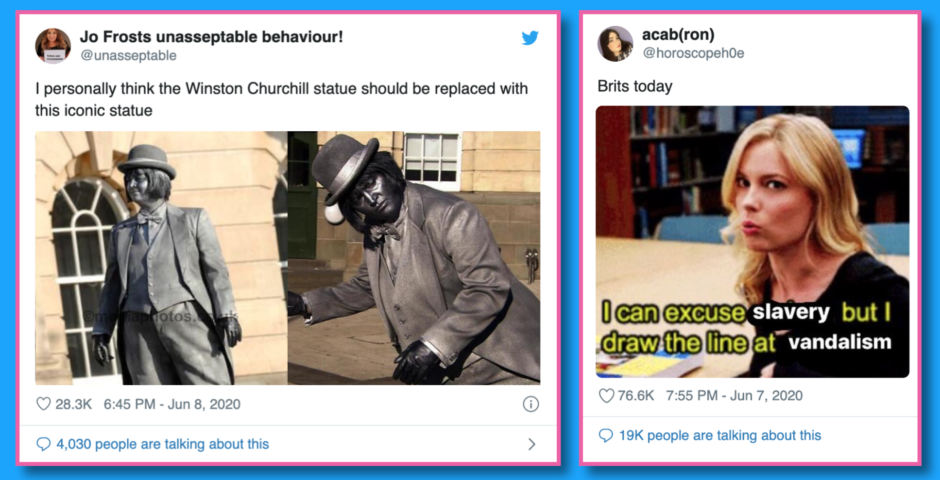 Statue memes: 26 marbelous memes and reactions about statues being taken down

Adios Churchill, it would seem

First, it was Edward Colston. Now it seems a day doesn’t go by without Churchill getting a redecoration with a can of spray paint from the local Halford’s. Councils are now taking the precautionary measures to remove the racist statues of slave traders and generally shitty people before they’re torn down, as various museums wait with open arms. Whatever your view is on the protests, you’ve got to admit that if there’s anything that unified us all, it’s our collective love of memes.

God, we know how to take the piss out of anything perceivably negative that comes our way in this country. We did it at the start of 2020 with the potential of a World War Three, we’ve done it with quarantine, so there was really no chance that we’d let the statues fall without a good laugh.

3. Take anything but Bobby

feeling it yet mate? pic.twitter.com/VQPcvg01Bc

5. This one isn’t going anywhere

there is one good statue in the UK and that is the vimto monument in manchester pic.twitter.com/o0pq7DvdAh

I personally think the Winston Churchill statue should be replaced with this iconic statue pic.twitter.com/4z1XE7vXWW

8. Think about the PIGEONS

We recently interviewed these guys here, open in a new tab while you read on.

10. All good boys deserve to remain

The only statue that deserves to exist pic.twitter.com/SF2ErXMDHy

12. They’re literally the child version of #9

'next time they come for the Churchill statue we'll be ready' pic.twitter.com/NSWzVCUsaR

13. I mean this in the most respectful way possible… yes

TV Presenter: So with yet another racist statue being pulled down, who is next, Churchill?

brits boohooing over people defacing a winston churchill statue i have to LAUGH pic.twitter.com/HxSuclKrzX

This is how they’re sending out signals to defend Winston Churchill’s statue pic.twitter.com/vFxfcresEo

16. Be back before dinner Wayne!

Ugly scenes in London as the football lads head to Churchill’s statue to defend are country pic.twitter.com/av7ZO1Km52

Tommy Robinson after seeing the video of the Churchill’s statue getting vandalised pic.twitter.com/i8FHWKaeZV

Guys leave the Jeffrey Epstein statue alone he put a lot of money into the banking and finance sector !

After the racist statues are all sorted could someone please do this one pic.twitter.com/jRYdNxohgo

The people criticising the Colston statue removal are right – removing statues of people erases history. That's why everyone's completely forgotten about Hitler. Sorry, I should explain, Hitler was a genocidal dictator in Germany in the 30s and 40s… it's a long story.

If you're saying the statues should remain in place to help educate, at school I managed to learn long division without there being a fucking statue of it in the middle of a city

You can't even trade 80,000 enslaved people for vast personal profit without getting cancelled these days

24. Petition to replace Churchill with SpiderCamel

why can’t we replace all the statues of racist ppl with this pic.twitter.com/hWRLD3zTGh

Racist statues are returning to the rivers, canals, and harbors of major cities around the world. Nature is healing.

Statues of past racists right now are like pic.twitter.com/Y0R02mIIb1