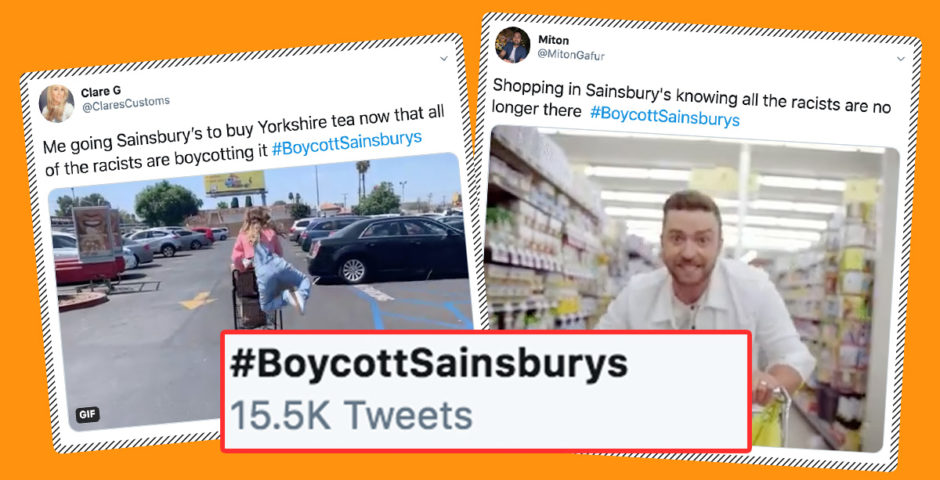 ‘Hey racists, can you hurry up with your Sainsbury’s boycott?’

Today in weird things that could only happen on the internet, people decided to “boycott Sainsbury’s” because they think Lord Sainsbury decided to take down the statue of a racist. Yes, really.

“Boycott Sainsbury’s” is trending on Twitter and everyone has lost their heads because they think it’s because the store has done something controversial – when it’s quite the opposite. In the most British response possible, people are calling out “racists” for booking up the Sainsbury’s delivery slots in retaliation – you really couldn’t make this up. Here’s an explainer of everything that has happened and some of the best reactions to it all.

People have got #BoycottSainsburys trending because it wants a slave trader statue down?? Like?? And people say Britain isn’t racist lol

Where did the ‘Boycott Sainsbury’s’ trend come from?

In short, today’s calls to boycott Sainsbury’s came after Lord Sainsbury, whose great-grandfather founded the store, was blamed for the removal of the Robert Milligan statue in West India Quay, London, after claims emerged that the family fund the Museum of London, which reportedly made the decision.

The statue of noted slaveholder Robert Milligan, was removed from outside the Museum of London Docklands after Mayor Sadiq Khan announced a review of all of London’s statues and street names. He said any with links to slavery “should be taken down”.

Tonight, we have removed the statue of slave trader Robert Milligan that previously stood at West India Quay. We have also announced a review into monuments and other sites in our borough to understand how we should represent the more troubling periods in our history. pic.twitter.com/Thfz3UHU96

The hashtag “Boycott Sainsbury’s” then started trending on Twitter as people said “racists” who were against the statue being taken down were refusing to shop at the store anymore. People have also shared screenshots of the store’s website with no available slots for online delivery  – saying the same “racists” are taking up all the slots in retaliation.

Hey, racists? Can you hurry the fuck up with your #BoycottSainsburys, please? I'm busy on Saturday. pic.twitter.com/twfSjF4stY

People are obviously very confused. One person on Twitter said: “So let me get this straight. People are going to #BoycottSainsburys because Lord Sainsbury has urged statues of slave owners to be taken down? Are these people actually for real?”

Sainsbury’s is yet to comment on the hashtag trend or news of the statue being taken down. But on Twitter, the Museum for London said: “The statue of Robert Milligan has stood uncomfortably outside the Museum of London Docklands for a long time, one of only three museums in the UK to address the history of the transatlantic slave trade.

“The Museum of London recognises that the monument is part of the ongoing problematic regime of white-washing history, which disregards the pain of those who are still wrestling with the remnants of the crimes Milligan committed against humanity.”

Here are some of the best reactions and memes:

Since it started trending on Twitter, the memes have been absolutely hilarious, obviously.

Me, a regular @sainsburys shopper seeing #BoycottSainsburys trending, only to find out it's actually because racists are mad Sainsbury's stood up for Black people's rights, AND now the tag has been taken over by people laughing at those racists. pic.twitter.com/qySwe1KFJX

Me going Sainsbury’s to buy Yorkshire tea now that all of the racists are boycotting it #BoycottSainsburys pic.twitter.com/ISzXEw3Ubo

Me when I find out it's racist #BoycottSainsburys and I can continue shopping there pic.twitter.com/fp4RlZPsXQ

On my way to do some lovely racism free shopping #BoycottSainsburys pic.twitter.com/qDyH9nIXq6

Shopping in Sainsbury's knowing all the racists are no longer there #BoycottSainsburys pic.twitter.com/T5p1O2hYxl

I don’t normally shop at Sainsbury’s. But if the racists and right wingers are really on this #BoycottSainsburys life I’m going to enjoy the clearer isles! Thanks! pic.twitter.com/WVZpR4QF30

Me at @sainsburys, after seeing the racists sobbing "#BoycottSainsburys" pic.twitter.com/3XGDehiV2J

I will not #BoycottSainsburys. It will be a wonderful place to buy Yorkshire Tea and PG Tips where racists don’t go.

White people: "the UK is the least racist country"

White people: I'm not buying from you no more because you are standing up for what's right #BoycottSainsburys pic.twitter.com/mtynag1R6p

My heart sank when I saw #BoycottSainsburys trending because that's where I've been doing my weekly shop throughout this pandemic, until I realised it was a bunch of right-wing nutters calling for a boycott because they can't handle anti-racism pic.twitter.com/6zs8Ed3sC7

Me in Sainsburys now all the racists are going to boycott it #BoycottSainsburys pic.twitter.com/esd57FaeMm

Coming in shopping after racists #BoycottSainsburys knowing now that the shops may not be as crowded as before be like: pic.twitter.com/g61CYXxzJT

So let me get this straight. People are going to #BoycottSainsburys because Lord Sainsbury has urged statues of slave owners to be taken down? Are these people actually for real? pic.twitter.com/xqp5ESHJ6b

• ‘This you?’ tweets are calling people out for hypocrisy over Black Lives Matter